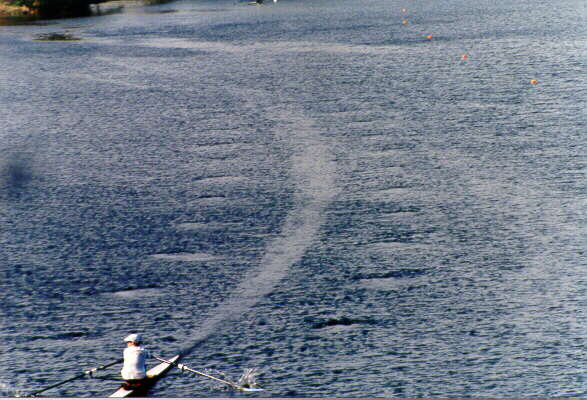 Puddles on the Charles

I took a run down the course with a gaggle of rowing legends; famed sculler Don Spero; Jim Edmonds of the 1964 US Olympic team; Fargo Thompson of the 1965 Vesper bronze medal 8; Ted Kakas, who has won just about every regatta anywhere at some point; US sculler Brian Jamieson; John Mcdermott, Brian Hallstrom, and coxswain Dan Lewis (whose steering may have done more to improve our time than any of us in the crew). Although I am a legit Occoquan rower, having trained there in 1991-92, I was lucky to get my spot, and thank the crew for having me along.

The URI oars were found by the Charles folks; further, Katy Bonnin of the Charles reports that "On Monday morning we found over 40 blades of all sizes and description on Mag Beach. I can get them to their proper homes via the Schuylkill this weekend, etc."

Can we get a witness on the headwear and gear choices of several Charles competitors? The sequined hats, the feathers in the caps, the fullbody powder blue "rompers," as one pal called them; do these look as good on the course as they might have in the imagination? You tell me...

The Schwab sprint was exciting, if a little confusing for the competitors; no one seemed quite to know whether they should take the turn as the finish approached, or row straight toward the shore. Standing on the Western Ave. bridge facing the finish line and waiting for the bows to power under you was a suspenseful moment, especially when Xeno Mueller and Rob Waddell cruised through dead even. Sonia and Rob Waddell won their races over Rumyana Neykova and Ekaterina Karsten, and Xeno Mueller and Don Smith, respectively. The winner of each gets $7500; second place $5000, and third $2500. The Waddells are rumored to be hiring a nanny and doing an extension to their home with the $15k (US) dollars.

row2k quick Saturday report/Sunday preview: Yesterday's 70-degree tailwind conditions have shifted into 50-degree headwind conditions; as I'm racing today, I figure it will keep me and other folks honest.We saw some great stuff yesterday; regatta director Fred Schoch went through the Eliot St. bridge in a pack of three across, clashed oars, and howled an epithet that would have made a trucker proud. At the same spot, an Ohio St. crew didn't just miss a couple buoys; they put the bow of a Resolute up on the shore such that both the coxswain and the bowman had to get out of the boat and drag them off the rocks.As ever, the Charles does not disappoint for excitement, let alone good racing: in one of my favorite traditions in headracing, this was one of those days where the low-number crews think they've won, and an unknown crew is in the back of the pack taking names and picking up time.

Speaking of the back of the pack: the final spot Saturday's racing was filled by the double of Ernestine Bayer and Jeanne Friedman. As the last 2-3 of us were walking off the Eliot St. Bridge, a woman who was cheering them on turned to me and said "That's Ernie Bayer, 92 years old and racing the Head of the Charles." Then, a pause: "She's the one at stroke." Well, Jeanne, I didn't need to be told, if it's a consolation! Bayer's legend doesn't rest only on her stamina and persistence; the crew looked pretty good to boot! 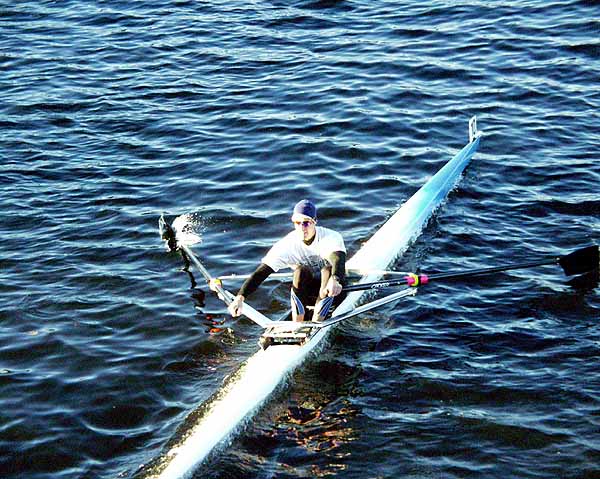 row2k Exclusive: Welcome to Boston, Now Go Home!
Get our Newsletter!
Enter your email address to receive our updates!