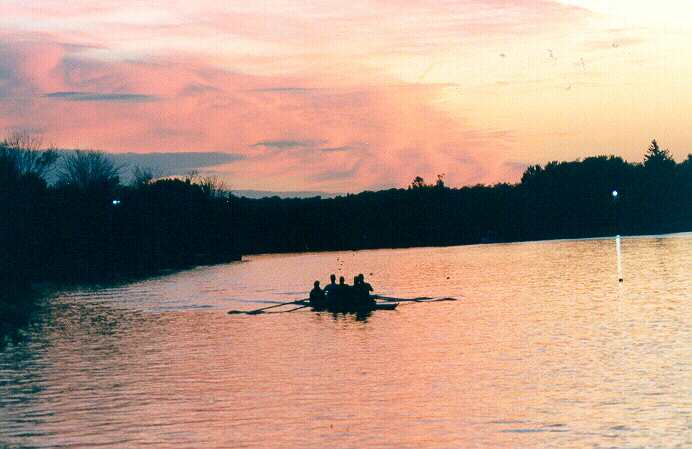 On the water
on this day of "club" events only, an interesting phenomenon has developed: the women's crews, *in general*, are rowing better than the men's crews. I say in general; for the ranks of the 60-70+ entries in each event, the women's crews seemed to have a few more crews with solid rowing.

This could be traced back to the thinking that it's easy to teach the boys to pull, and to teach the girls to row "correctly," but I've been to this race at least 15 times (haven't really counted), and I suspect there's more to it than that.

I believe that the ascendancy of women's rowing in the country is finally showing up on race courses, not only in the top crews, but at all levels, in the rank and file of the sport. Watch for crews to get better and better; one can only hope it doesn't mean that men's rowing must decline.

Let all of rowing and rowers ride the rising tide.

Off the water
The spectacle of the day was the life-size figure of Jamie Koven in the USRowing tent, with Jamie Koven himself hovering around the area. Sort of like a Doublemint commercial...

Of course, we saw PLENTY of intermingled oars, near-misses, and outright crashes. As a rule, the crews who kept their eyes in the boat and kept rowing fared best; be careful out there.

Word from Norman Hildes-heim (the NY Times reporter) is that a photo, and perhaps his story, will grace Page A-1 of the New York Times tomorrow. Check it out!

And if you want tons of Charles coverage, check the Boston Globe, natch.

Correction: saw Wes Kerns today, he informed me that he won the Occoquan Chase, not the Potomac.

If you're not here this year, you're missing a truly spectacular event. I've never seen so many rowers gathered in one place; this is all-time.

Even before it's over, kudos to the event organizers. 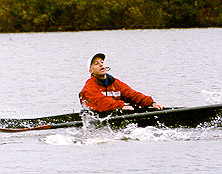 The Coxwains's Voice: Seth Bauer and Pete Cipollone Cox the 1997 Head Of The Charles® 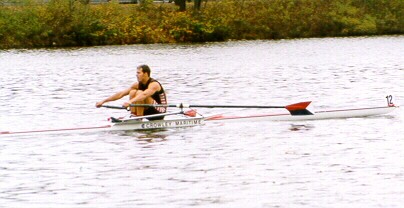 Day Two, Head of the Charles 1997
Get our Newsletter!
Enter your email address to receive our updates!