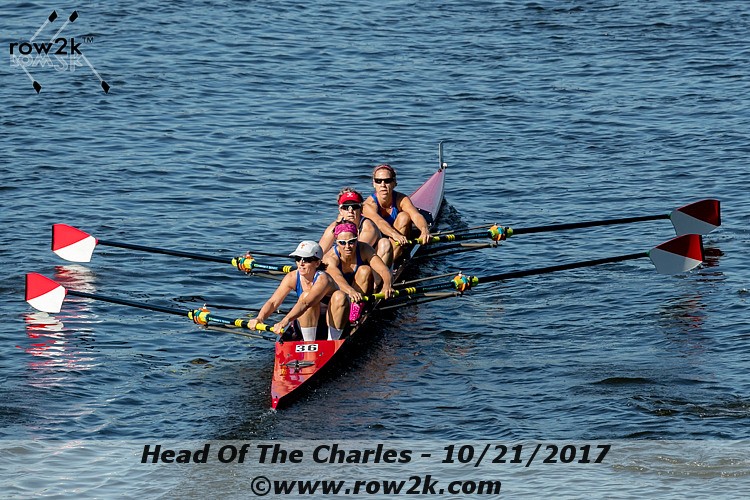 In the Women's Senior Masters Fours, local legends CB Sands-Bohrer, Linda Muri, Olwen Huxley, Jennifer Sacheck-Ward, coxed by HOCR volunteer extraordinaire Amanda Cox (yes, that is her real name) came from way back in the field to not only win the event, but set the course record to boot.

row2k caught up with the crew after Saturday's race.

row2k: Where did you start?

Sands-Bohrer: We started 36. We knew we were fast but we also knew it was going to be a challenge coming from the back of the pack and Amanda just crushed it in terms of getting through three or four solid packs of other boats, getting completely out of her coxswain seat, and yelling to make sure that they moved over and then sometimes having us actually pause or paddle so that she could get the better line. So, she did a great job.

row2k: You got out of your seat? Out of your coxswain seat?

Cox: I was this close to jumping out and moving the other boats out of our way.

row2k: When in the race was this?

Cox: So, this happened mostly at three points. We had between Weeks and Anderson were where it really starts, you know, that's the big bottleneck I was worried about as we approached the race. We had, we needed to do that. That was one of the times we needed to pause.

Around Elliott, I actually ended up taking the outside most of the Elliot turn because there were three or four boats hugging the buoy line. I realized if we had to wait for them to move over, it was just going to take just as long as it's growing in clean water, getting around then, and tucking back in. We tucked back into the buoy line right before here but we have a couple of pictures that Mason got of me pointing and telling, directing traffic, and screaming.

row2k: Which is always awesome.

Cox: We both had to yield. I just wanted to remind them where they had to go.

row2k: And what did they say to you? Did you scare anybody?

Sands-Bohrer: Yeah. I think she did.

row2k: Is that the point, scaring people.?

Muri: I felt good when I heard her scream.

Cox: Yeah, I mean, you know, we were moving and part of it is a safety thing, too, right? We needed to have enough clearance and that was a lot of the pauses. The last time we really had a kerfuffle was right in front of the Windsor dock, going for the inside of that turn to me like that's the critical inside. You get a really nice line, you get a lot of momentum. If you are taking that wide line around to the finish line, it really kills your time.

row2k: And you never know if that boat is going to push you out even further.

Cox: Right. And so, it'll just kill the momentum if you don't take it. We were passing a boat, it was, you know, one of those moments where I said if we take two, they need to take two strokes to get out of our way but we're going to be the in two strokes and if their two strokes aren't as fast as ours then there's going to be something happening and so we just, you know, we held back for a few strokes and then we just went for it and I know I could feel everyone in my boat going ohhhhhh.

And they just, they took it back up. I mean the second I said back up they were back up and we went. It was awesome.

Muri: There was some road rage, not in our boat though.

Cox: Not in our boat. There was moments where I had to let them know afterwards that everything was okay, you know, because, but

row2k: Good choice. You've set course records before, the two of you in doubles

row2k: Is a 30 second margin the widest gap for you guys?

Muri: It's gotta be. I mean, you know, for course record. I mean, we won the double by almost a minute I think the first year.

row2k: There was an opportunity.

Muri: We knew there was an opportunity and because there should've been, should be about a 30 second, 30, 40 second gap between those two events. And yeah, we're just bringing it up.

row2k: Have you done this with these women before and see you surprised, scared, traumatized?

Cox: No, let's see. Was I surprised? Not really. Was I scared? A little bit because they had already beaten the course record in practice.

Muri: Yeah, without her, we had beaten the course record.

Sands-Bohrer: We get faster each weekend and we broke the course record consecutively. Three times in the three 'Head of the Kevins' [local Boston club HOCR prep regatta series - eds].