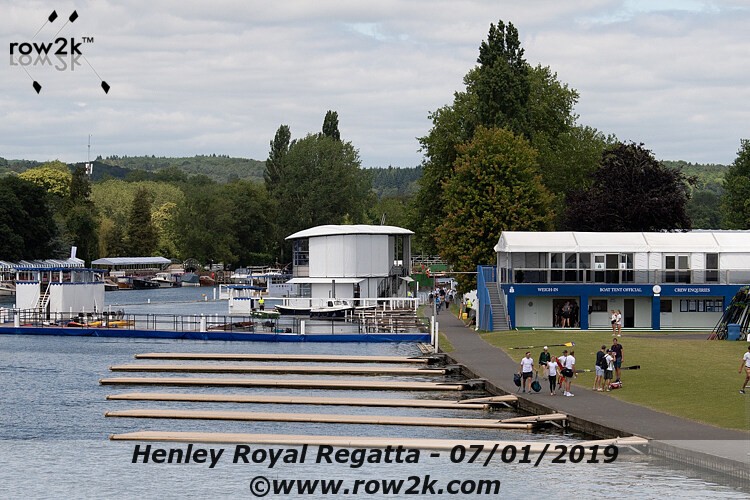 The 2021 Henley Royal Regatta has been postponed from the planned dates of June 29-July 4 to one of two options currently under consideration:

The Regatta Committee determined that current COVID-19 conditions and restrictions in the United Kingdom will make the original dates untenable; even in the very near term, installation of the course and site structures usually begins in March, creating considerable time pressure.

See the full release at https://www.hrr.co.uk/update-2021-regatta; the full text follows:

As a result of the ongoing impact of the COVID-19 pandemic, the Committee of Management of Henley Royal Regatta has reluctantly concluded that the 2021 Regatta cannot now be held from 29 June to 4 July at Henley-on-Thames as originally planned. However, the Committee has decided against outright cancellation at this stage, and is instead exploring the potential to stage the Regatta in August, in Henley should conditions allow, or if not, at Dorney Lake.

Despite the positive news about vaccine rollout in the UK, the timing of the easing of current lockdown restrictions and a safe return to the staging of large scale outdoor events, remains highly uncertain. In particular, it has become increasingly apparent that we cannot start the installation of the Course and the construction of the site in March with a reasonable expectation that it will be possible to stage a Regatta starting on 29 June. In addition, even if by then a Regatta were to be possible, with either a limited number of spectators or ‘behind closed doors’, access to the wider area around the Regatta site is not within the Stewards’ direct control. This is likely to present a level of operational and public health risk that would be unacceptable to the Regatta, as well as its stakeholders including local authorities, public health officials, the police, and local residents.

The Committee will strive hard to deliver a safe Regatta later in the summer, in particular for the sake of the athletes and coaches who have worked tirelessly to give themselves the chance to race at Henley this year, and for whom Henley is an unrivalled beacon in the annual racing calendar. However, our highest concerns will remain the health and safety of all those involved in the staging and running of the Regatta, wider public health, and the Regatta’s role in society’s efforts to limit the spread of COVID-19. The possibility therefore remains that the 2021 Regatta may ultimately be cancelled.

Nonetheless, for now, the Committee is actively engaged in the evaluation of two principal scenarios: a Regatta at Henley from Tuesday 10 August to Sunday 15 August, or alternatively, given the exceptional circumstances, a Regatta at Dorney Lake at dates in August to be determined.

We recognise and regret that these revised dates will present a challenge to many in the sport, especially school and university boat clubs. They will also present a challenge to our suppliers, contractors, local traders, landowners and the Henley and Remenham communities. It is therefore our task in the coming weeks to engage with as many stakeholders as possible, and ascertain the feasibility of staging a Regatta in August. In particular, we encourage the boat clubs to whom we have written today to provide us with their feedback. Our hope is to provide an opportunity for our competitors finally to race, after months of distance from the sport that successive lockdowns have necessarily enforced.

The Committee will aim to issue further guidance on the potential for an August Regatta as soon as practically possible following our engagement with stakeholders, and at the latest by the end of March. In the meantime, we remain deeply grateful to the rowing community, our Official Partners, and especially our Members, for their ongoing support and encouragement.