There are dress codes for both men and women, a course distance that is unique to Henley (and has been moved four times), and even when the sun is not shinning, the entire venue from top to bottom, from every point, sparkles with color, tradition and history.

So, it should come as no surprise that an event as old as Henley could wrap itself around a single anniversary like the Centennial of the Henley Royal Peace Regatta - run in 1919 to honor the end of the First World War and those members of the rowing world and Henley community that fell in the conflict - and still manage to run one of the most iconic and competitive rowing events in the world at the same time. 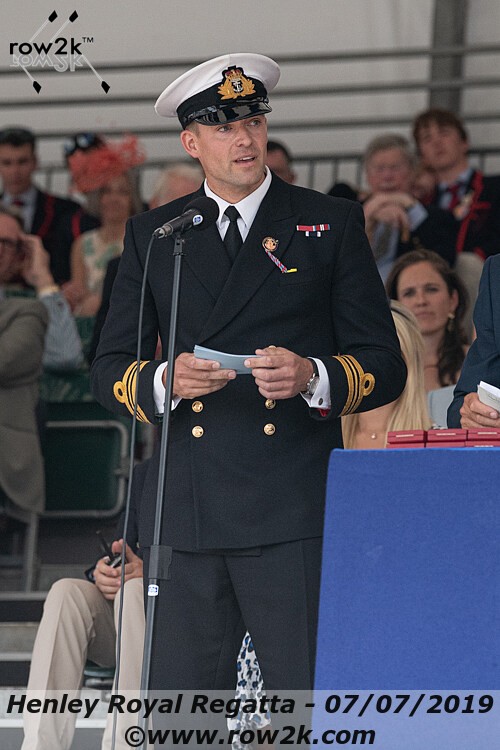 From Tuesday - a day before the actual racing began, and before Henley locked down the entrance to the Stewards Enclosure to ticket holding ladies wearing skirts and dresses hemmed to below knee length, and gents in ties and jackets, to finals Sunday and the last races of the 2019 regatta - Henley turned up its hard-to-match level of pomp and circumstance to bring out a newly minted trophy and present it to US Naval Academy eight, winners of the second only running of the King's Cup, the Peace Regatta's featured event.

And the crowd in attendance loved every emotional filled speech and colorful military moment of it, right up to British Olympic legend Pete Reed heading up the Prize Giving suitably dressed as Lt. Cdr. Pete Reed OBE, and handing the King's Cup to the Navy athletes outfitted in formal dress white uniforms.

While the level of rowing prowess among the eight invited nations that sent mixed gender crews to race varied - sometimes to significant levels - when it came down to the final, the King's Cup race was as entertaining as any that came before or after on Henley Finals Sunday. 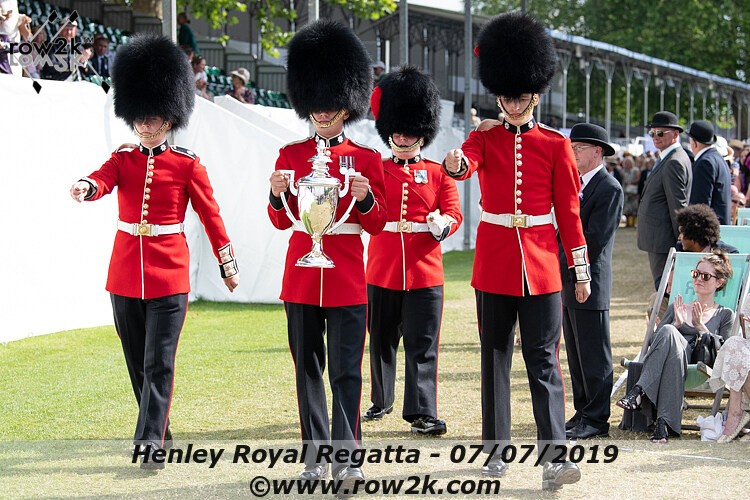 Bring out the Cup

The USA and Germany went stroke for stroke and traded leads from the start, and only separated completely and convincingly in favor of the Americans in the final few hundred meters, keeping the crowd on their feet cheering, and making Navy coach Rob Friedrich nervous to the end.

"That was an exciting race," Friedrich said. "We were understroking them for a while there. So, I knew we had some room to go up and we pulled through in the end. I was really proud of them. But I was very worried."

It was not as nerve wracking for coxswain Matt Catanoso.

"So far this regatta, we've been up early and then we settled down. But this one was definitely not like that. The Germans were going after it and I could just see that, rating wise, we were underrating them by a decent amount, and I knew that as long as we relaxed and rowed our race, stayed committed to what we could do, we would be able to get it done," he said.

"Coming into the thousand, I saw them start to burn. We took a move and carried that momentum to the end, really pushed it to the end and carried it home in the sprint."

It was a proud moment for everyone involved in the Naval Academy effort, which saw all of the Academy's three squads, heavy men, lightweight men, and women, place athletes in the boat through selection.

"It feels good to come across the line, even though we were gassed and people were puking at the end, but it was a great feeling to be here with our team, and do this for Navy and everyone back in the States, and for the United States Armed Forces," said Jared Taintor.

Navy's win in the King's Cup was the second for the USA, which had three crews racing in a final Sunday. Earlier in the day, Harvard's men's coxed four completed their Henley week with a win over Durham University in the Prince Albert Challenge Cup.

"It's just fantastic to cap off the season with a win here," said stroke Pieter Quinton. "We had a great season overall, winning the team points trophy at Harvard-Yale, the JV winning at Sprints. To finish it off here, like this, is great, and will help us keep the ball rolling into next season. It's been a great couple of days, and now we get to come down to the Stewards Enclosure and enjoy some of the spectacle of Henley."

Northeastern University also raced in the Temple Cup final, but lost to Oxford Brookes University. Northeastern sent two eights to Henley, and went deep enough in the regatta for the A boat to have to eliminate the B boat on the third day of the heats.

Head men's coach John Pojednic said after that he was disappointed in the result, but not of the effort his two crews put in during the week.

"It's obviously a disappointing result," he said. "But I'm disappointed for the guys. To put some perspective on it all, we're a US college team. We finished our national championship a month ago. We gave the guys some time off and then regrouped and got the boat back together and did an appropriate amount of training for what this whole trip was supposed to be.

"I think we found ourselves today up against a crew that's at the end of their season, the peak of their season, and I just think we were in different places in terms of boat speed, even relative to our own standard. We're not at the speed we were at the IRA.

"But you look at Henley as an overall experience, and there is no question that we were trying to win the race, but that's not where we are right now. We had a very positive experience over the past month, and experiencing the bitter taste of defeat is tough overall. But I think this whole trip for our program, for our athletes, was very productive and positive." 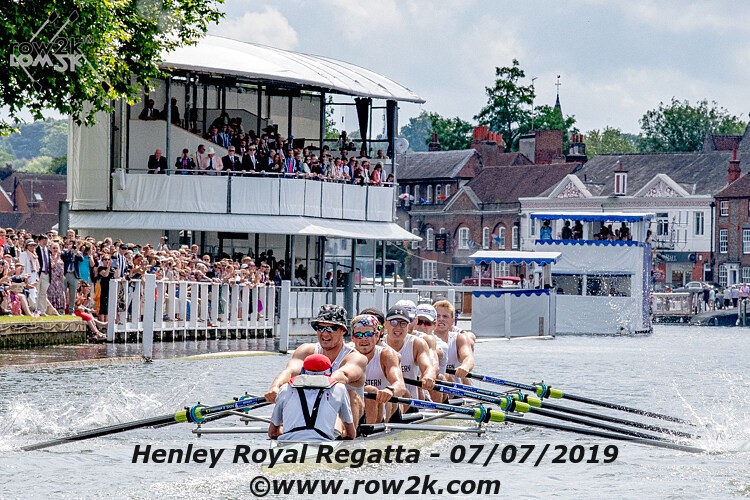 Northeastern University racing the final of the Temple Challenge Cup

In all, 24 finals were run, and 24 awards were handed out at the end of the day.

Among some of the highlight events, New Zealand had a pretty good day, taking both the Grand Challenge Cup, and the Remenham Challenge Cups for the men's and women's elite eights, while Emma Twigg won the women's single in the Princess Royal.

In addition to their win in the Temple, Oxford Brookes added the Ladies Plate to their take; Eton College was crowed the junior men's eight champions in the Princess Elizabeth; the Chinese national team women won the Princess Grace Challenge Cup in the quad, and Latymer Upper School A won the junior women's quad - the Diamond Jubilee Challenge Cup.

"It was a good race, not as good as yesterday since the conditions were a bit more difficult today because of more boats on the course, but it was pretty clear at the end. I couldn't hold the pace I wanted to go. Yesterday I was only three seconds away from the 30-year record, which I wanted to break, but it wasn't possible because of the wind," Zeidler said. 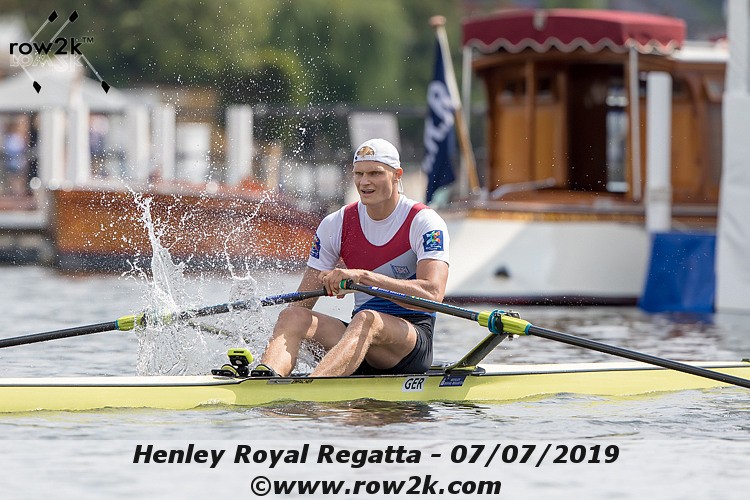 Oliver Ziedler in the Diamonds

"I feel pretty confident right now and especially when it comes to the World Cup in one week and we will see what happens then."

The loss was a bit of a letdown for the British, but not to the Kiwis. And, especially not to double Olympic champion Hamish Bond, who is new to eights rowing, along New Zealand men's Olympic sculling champion Mahe Drysdale.

Bond retired from rowing after the 2016 Olympics and took up cycling with an eye toward making the 2020 Olympic team as a cyclist, but changed his mind and returned to rowing and is now hoping to go to Tokyo in the men's eight. 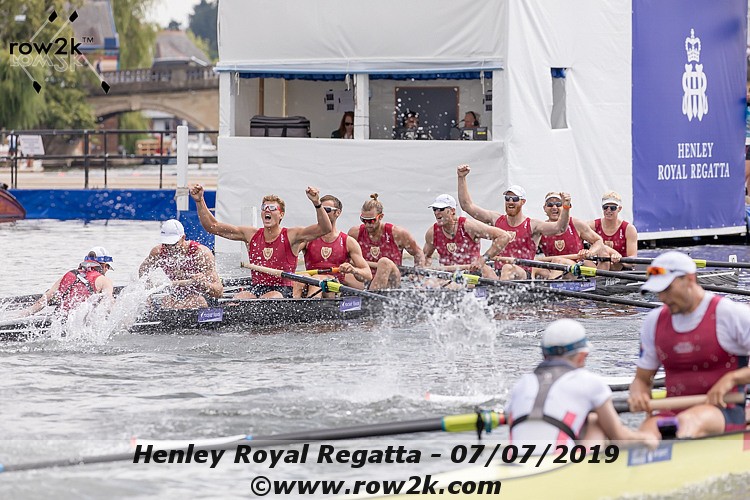 "It was good today," Bond said. "This was the best race we've put together. It's obviously a new crew, and a couple of us at least are fresh to eights racing, a lot of rowing experience, but not much experience in the eight.

"I guess Mahe and I are probably doing the most learning, in some ways, of how to make this boat work, and I thought we had a good row today. Hopefully we can keep on for the rest of the season."

Bond said that being back in rowing was something he had planned on doing all along after retiring following his second gold medal in the pair with Eric Murray - until he started cycling.

"When I switched to cycling, I intended to come back to rowing, and then the further I got down that rabbit hole, the less it seemed likely that I would come back to rowing. I was fully committed to making the New Zealand team for the Olympics on the bike.

"But I guess around the start of this year, I sort of found myself on the track, going pretty well admittedly, but I looked at what the next 15 or 16 months through to Tokyo looked like, and what I was going to have to do, and the challenges involved, and I more or less decided that rowing in the eight was a goal that I would really like to have a go at before I get too old," Bond said.

Ziedler's win in the Diamond Sculls was the first for a German sculler at Henley since Marcel Hacker won in 2004. He said he was trying for the course record. Since he has not been sculling long, maybe next year...

Outgoing British Prime Minister Theresa May, who grew up a short distance from Henley-on-Thames, and has been a frequent regatta fan, was on the river today to watch a race.

And a more regular face at Henley, referee Boris Rankov, retired today after the overseeing the Grand Challenge Cup race. 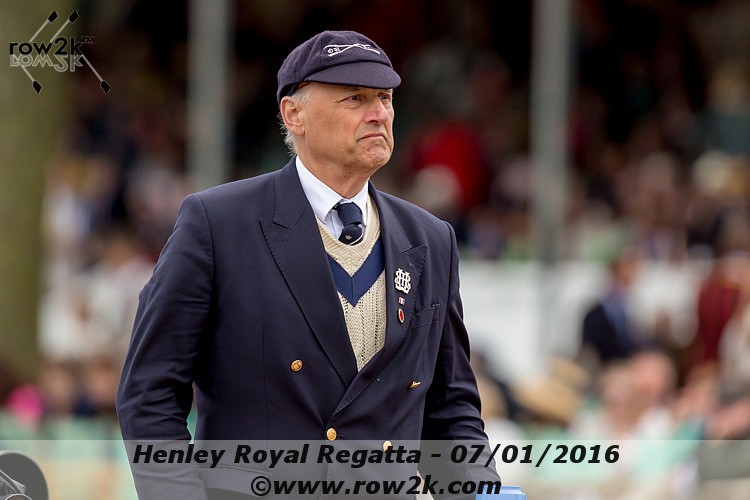 Henley Royal Regatta Saturday: Who, When, and How to Watch