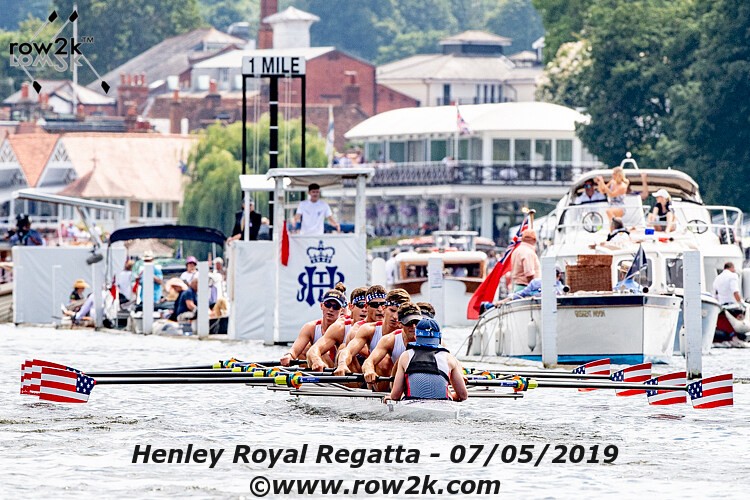 US Naval Academy racing to the finish Friday

After three long days and 260 races, the 2019 Henley Royal Regatta is ready to shift into the high stakes weekend duals.

Crews that felt they had what it takes to race for a chance to be in the Steward's Enclosure for the Sunday Prize Giving are either one race away, are on their way home or standing on the side of the storied River Thames course watching.

Harvard had a shot at having two crews in the semifinals, but their Temple Challenge eight lost in a late afternoon race against Oxford Brookes.

"We're definitely pleased with (the four) said Harvard head coach Charlie Butt. "And we have a very tough race against a good club, basically Oxford Brookes, tomorrow. In the eight, we didn't quite have the race we were hoping for," he said. 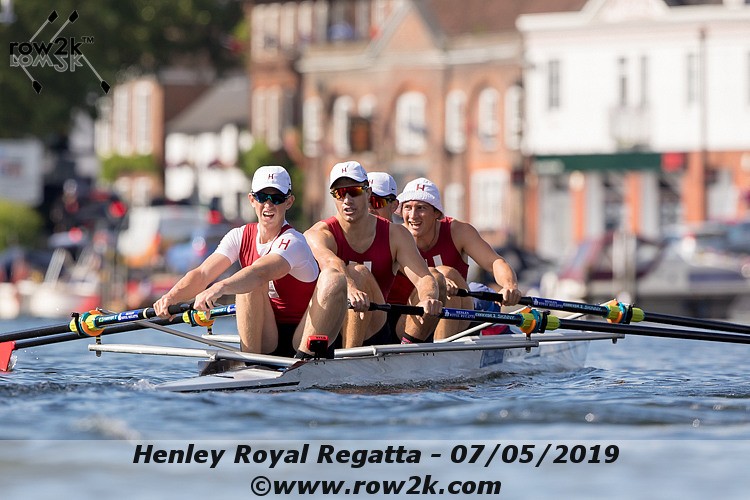 "It was a good day. We rowed hard. We managed a terrific victory this morning against Cambridge where we were able to sustain a higher speed in each facet of the race. In (the eight) we came up against a good opponent," Butt said.

"We didn't quite hold them close enough. We gave a good push, but it was a two-thirds margin, ultimately. So, on another day, we felt we good have done it. But on this day, it didn't go our way."

Also, rowing in a Saturday semifinal will be three US sculling squads, including Artym Hayda and Hector Formoso-Murias, (Georgetown University lightweights) rowing in the Double Sculling Challenge Cup; and two quads - the women's entry from the Advanced Sculling Initiative of the Northeast, and the men's entry from the Schuylkill Navy High Performance Center. 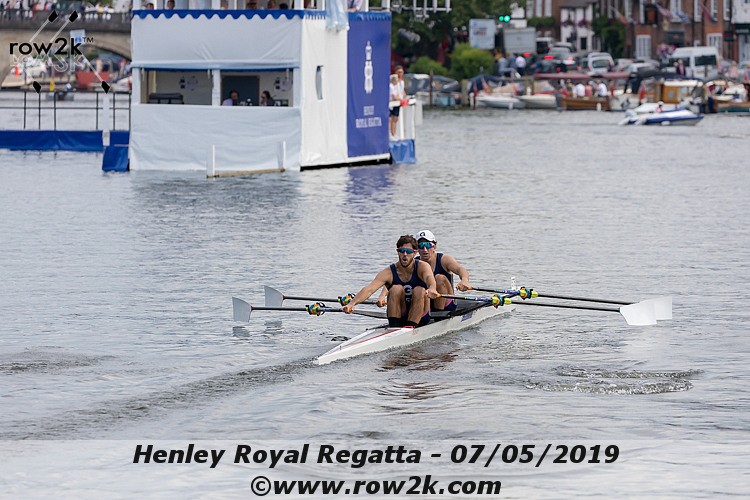 Among those eliminated Friday was the St. Joseph Prep eight that has been rowing in the high school Princess Elizabeth Challenge Cup, and Brown University, which lost their third-round rematch against Newcastle University in the Temple Challenge.

Newcastle beat Brown last year on Friday, and Brown, hoping to avenge that loss this year, went out hard and led for most of the first 1500-meters. Newcastle, however, began to move on Brown in the closing stretch and took over the race in the last 500-meters.

"That was a tough one," said Brown's Henry Hollingsworth. "We thought we had it. We went after it for the first thousand meters, and we were just trying so hard to hold on, but we couldn't do it. We think we had a really good first half, so we can at least be proud of that. We were ahead for about the first fifteen-hundred, we thought we were really moving, but they started to creep up on us a little bit."

Of the six US crews that will race on semifinal Saturday, the US Naval Academy's mixed eight crew racing in the King's Cup will be among them. The special event is being run this year to honor the 100-year anniversary of the 1919 Henley Peace Regatta."

That regatta was held in place of the traditional Henley Royal Regatta in an effort to help ease the return to normalcy after the end of the First World War. Eight mixed gender military crews from the six World War I allied nations - Australia, Canada, France, New Zealand, the United States, and the United Kingdom - plus the Netherlands and Germany - were invited to compete.

Friday's final day of heats saw that group narrowed down to four and Saturday's semifinals will see the United States, Australia, France, Germany all fight for a chance to take the newly minted King's Cup trophy unveiled Tuesday before the racing began.

After a week of ceremony, the crews were happy to have gotten to the racing portion of the event. 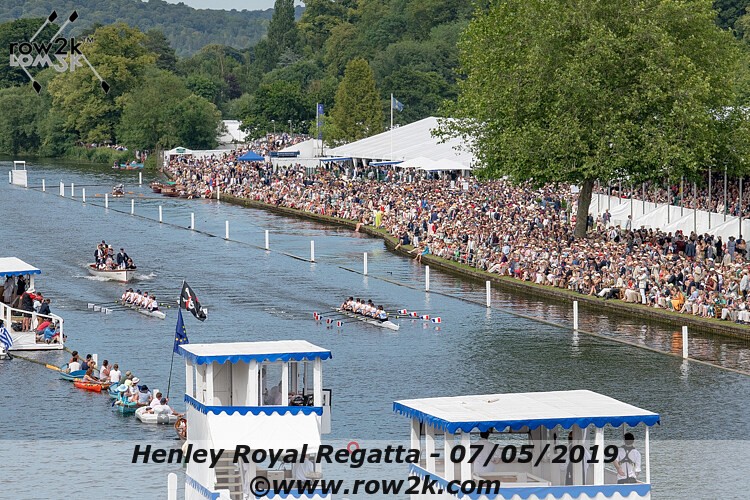 "It's really been an honor to be a part of this," said the Naval Academy's Griffin Dunne. "And it's good to get this first race over. It was a good stepping stone for tomorrow, to get the jitters out. The first time racing at Henley is crazy. It's like nothing else I've raced in, super loud at the line, and even at the grand final at the IRA, there was half this many people there. It was really quite a spectacle.

"It's a dream come true for a lot of our crew. It's been a privilege, and it's just been so special. I'm in awe of what they put on here."

Australian team captain and bow seat, Lt. Col. Selina Rowland said her squad was equally impressed, happy to have been racing and happier to have advanced into the semifinal.

"It's been fantastic all week," Rowland said. "Today was our first racing. We were against the Dutch, so we knew we had to go off fast. We got the lead from the get go, and kept on going."

Australia won the 1919 King's Cup race and are in the spotlight. "No pressure there at all," joked Rowland. "Well, there is a little bit, but we're sure we will be fine. We've trained hard and we'll do our best against some fierce competition and we'll see how it goes." 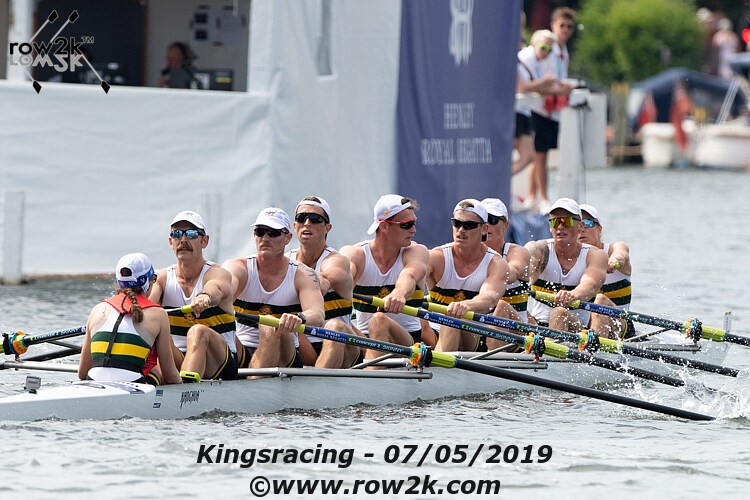 The weather has not been part of the story so far this week, but the heat was definitely creeping up today. The tar did not melt like it did during the heat of last summer's regatta, but it did get sticky.

When the British Tail Gate, it just doesn’t look anything like a parking lot at a football game. Wonder which one is more fun? 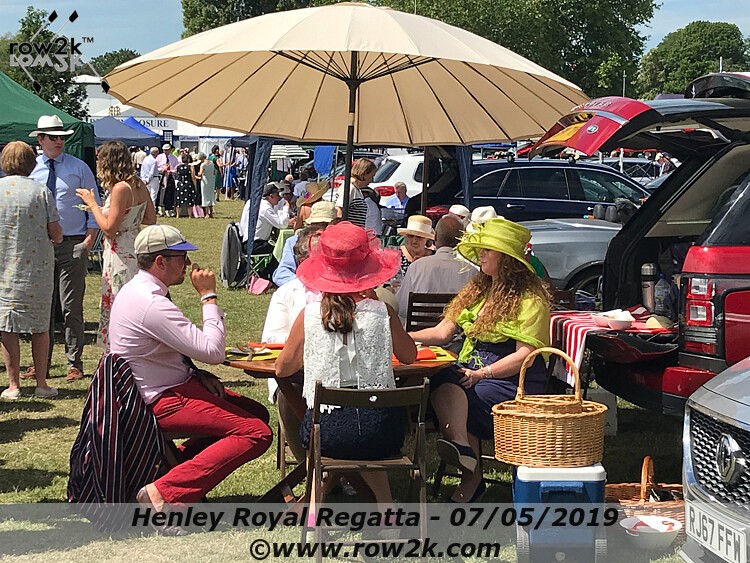 When the British tailgate, it's a little different than in the US
back to top
Henley Royal Regatta Features