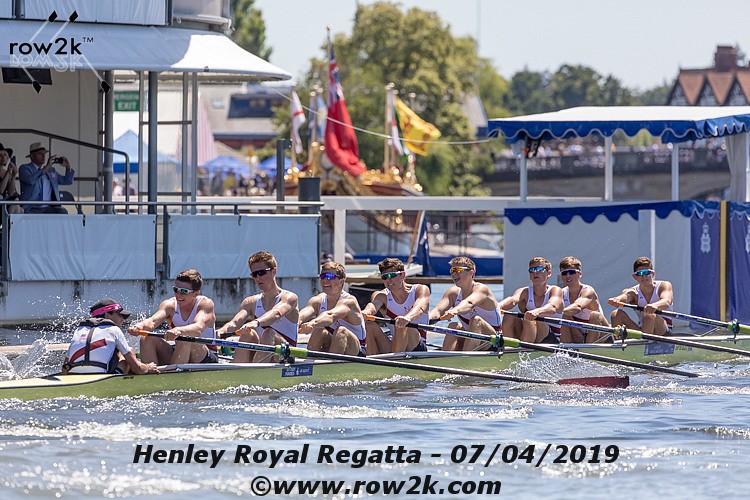 St, Joseph's Prep sprinted from behind to win at the finish

By the time St. Joseph's Prep had reached the Steward's Enclosure on the Royal Henley Regatta race course, they had already been trailing for most of their second round Princess Elizabeth Challenge Cup race Thursday afternoon.

The chances that St. Joe's would catch the German high school crew from Berlin in front of them did not seem very good. St. Joe's fell behind early and Flatow-Oberschule High School matched every move the Philadelphia school made to get back into winning position.

What was not known by many of the people watching the race, was that coxswain Connor Thompson was fighting a steering issue that was pulling the eight off course, and towards the booms. It was an issue that first popped up in their opening race on Wednesday, a race that they won fairly easily.

But the pulling began again right after the start Thursday, and St. Joe's fell behind right after settling into their base, Thompson said. "Off the start, we were kind of getting pulled towards the booms, basically the whole race. And every move we made, they made a counter move, they were really able to contain the race."

But the thought of letting the issue overcome a chance to get back into the race, and maybe race again on Friday, never entered Thompson's mind. What he was thinking instead was about the toughness of his crew, and the sprint they had worked hard to develop over the scholastic season.

"I knew my boys had a big sprint, so once we hit the mile and the eighth, I told them we need the sprint, and we lifted it up two beats," he said.

St. Joe's will now race Friday against Shiplake College, and with St. Paul's School, Concord, and The Lawrenceville School eliminated in their races Thursday, St. Joe's is the only remaining US high school in the Princess Elizabeth Challenge.

The high school race was easily the most exciting race of the second day of the 2019 Henley Royal Regatta for the 17 US crews that began the day Thursday. There were other races with stories worth recounting, and exciting matchups setup by the wins and losses of the day, but by the end of racing, nine US teams were done for the regatta.

Of those losses, none were huge surprises.

The only real surprise of the day did not involve a US crew at all. Mahe Drysdale, who is the defending men's single champion and was going for his seventh Diamond Challenge win was beaten easily in one of the last races of the day by Matt Brigham. 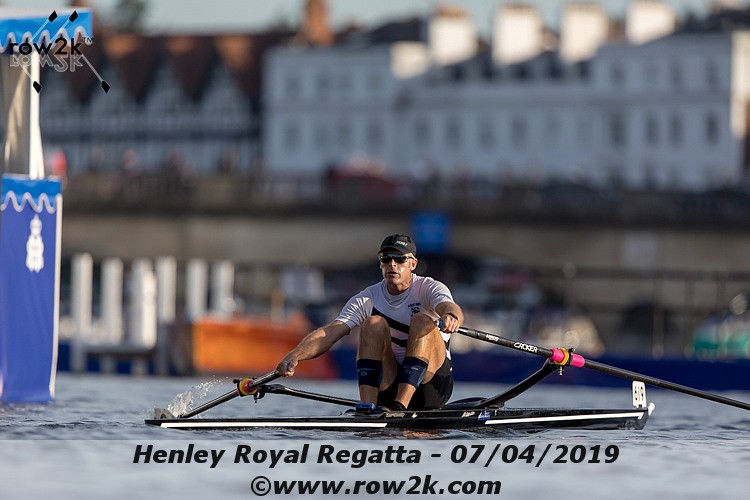 But among the US races worth noting was Brown's win over Michigan, because it sets up a Friday rematch of Brown's 2018 third round loss to Newcastle University, which beat Edinburgh University in the first race Thursday morning.

Brown was eliminated by Newcastle University last year, and hope to avoid the same fate Friday.

"We were pretty much level to the barrier with them last year, and then they made a good push in the middle," said Brown head coach Paul Cooke. "I don't necessarily have any expectations for the race being anything like last year. I don't really know what they're like. I just think we have to race our race."

Several of the Brown crew were in the boat last year, Cooke said.

"There has not been a lot of talk. Just get ready to go. Anytime you race someone you raced beforehand, there is a history to it. It's just one of those things. You want to do well, and it's a way to measure yourself relative to where you were the year before." 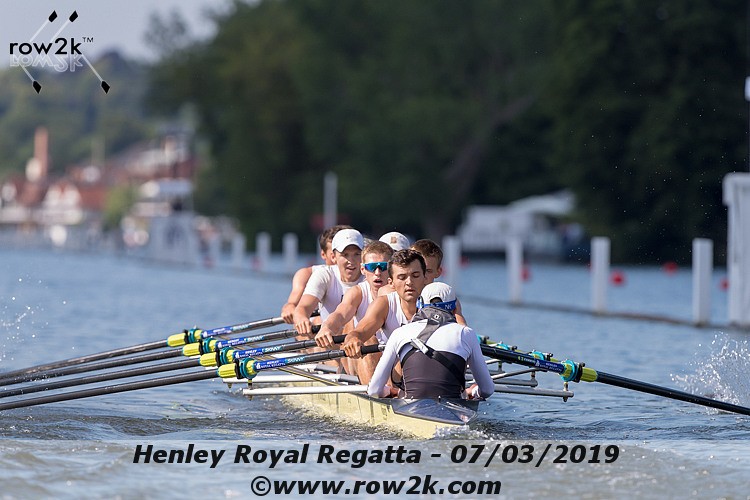 Brown University will have thrid round rematch Friday

Two other races that set up an interesting dual were the wins by both Northeastern eights racing in the Temple Challenge. Both crews advanced in their heats and will face each other Friday.

Just after taking out Oxford Brookes B, Husky sophomore Jan Hennecke, who is rowing in Northeastern A, said the summer program that has both crews racing through Henley is good for the development of the collegiate program overall, no matter which boat wins Friday.

Northeastern finished fifth at the IRA Championship and are hoping this will help propel them further towards a possible IRA win.

"I think we've made really good progress over the last three years, and we're just getting better and better," Hennecke said. "We hope we can continue to improve over the next two years and see where we are.

"Today was a great race, and tomorrow we race against our second boat, so that's going to be interesting as well. We hope we can advance, and then hopefully, row for a championship on Sunday."

Another race of note that involved two US crews racing each other was the Temple Challenge matchup that pitted a heavyweight crew from Boston University defeating the University of Pennsylvania lightweight eight.

Probably not many people would have bet against BU in that race. There are are no specific events for lightweight crews at Henley, and Penn, while they were the unexpected Eastern Sprints Champions this spring, and had traveled as a complete crew to Henley to extend their season, were not exactly an even match against the BU heavies, even if they went into the fray willingly.

But, make no mistake, Penn did not row to the start of the race with the expectation that they would lose. The athletes have embraced the underdog role that was handed to them when they started rowing at Penn in the Sprints lightweight league.

Penn has never won an IRA lightweight title, and their Sprints win was the first for the school since 1976.

The look on their faces when they climbed out of their boat on the dock after racing late Thursday said two things - they had left it all behind them during the race, and they were disappointed.

A few minutes in the boat bay with head coach Colin Farrell, and a talk about what is to come and what can be gained from racing here, changed their moods considerably. 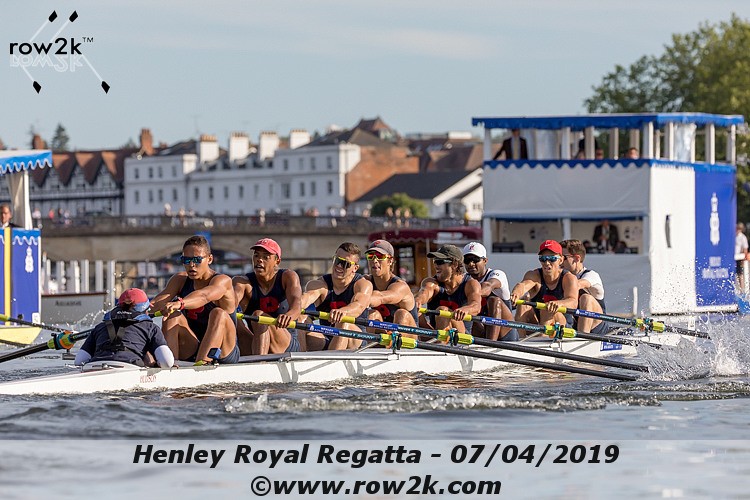 "Unusually, you get your regular season, and you get your couple of championships at the end of the year, and then it's over. See, ya. Summertime."

It is summertime now for the Penn lightweights.

But with the success they had this spring during their collegiate season and the pride they felt being able to come to Henley and row into the second round of racing, leaves them hopeful for the coming fall and the new collegiate year.

"This was a great way for us to keep going, keep rolling, and now we can build off this and come back stronger next year," Williams said. "We always felt like underdogs," he said. "For the past four years, people have been saying that Penn should be doing this, Penn should be doing that, but they can't get it done."

As Williams said, losing stinks, but in the case of the Penn lightweight eight at Henley, it's really not all that bad. "We really showed everyone that we can get it done, and we're a quality crew and we have what it takes."

Among the crews that began first round racing Thursday, the US had two men's sculling crews going to the line. One, Community Rowing Inc., was eliminated, and the second, the Schuylkill Navy High Performance Center crew from Philadelphia's Penn AC advanced with an easy win against Reading University B.

The race for the Philly quad was the first ever for the crew that is training at Penn AC in an elite sculling camp run at the club. This is the development crew, or the B squad. The first quad from the camp just competed at World Cup II in Poznan and finished eighth overall.

That crew will race in the upcoming US Senior trials on Mercer Lake next week. This squad will go as far as they can at Henley and then go back and bash heads with the A group - get them ready for trials. 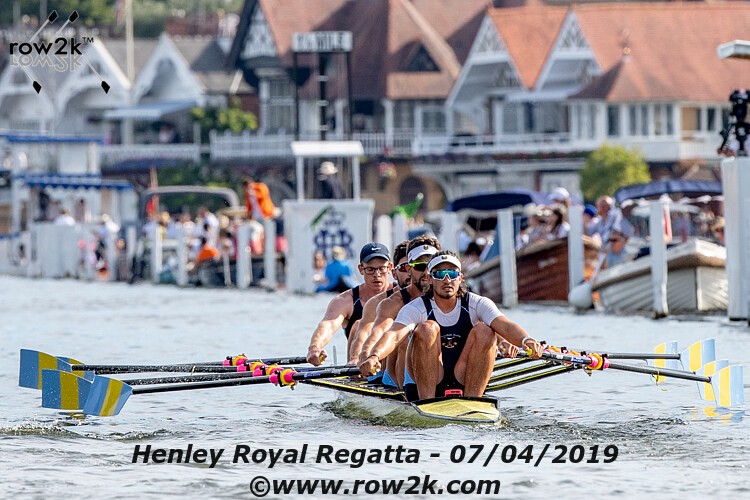 "It's been a lot of fun," Finn Putman said of being in the sculling camp. "I've been sculling for less than a year, so it's kind of been something new for me. I was a sweep rower for eight or nine years, and I think I reached my pinnacle of sweeping. So it's been fun to start all over again with sculling. Now I just want to see how far I can get."

While Thursday's race was Putman's first at Henley in a sculling boat - he raced Henley before, with Cornell, his college crew - he said in a lot of ways it was the same; "Pretty chaotic, flat out, one shot at advancing, and a lot of people on the shore.

"And, the quad is a pretty fast boat, just like the eight. But it was really good to get this one over with. There was a little bit of nerves before the race, you never know who you're going to race, and each race could be your last one."

The US does not have a lock on public political commentary these days, and that was on display Thursday in one spectator rowboat. A man holding a two sided placard welcomed European rowers on one side and voiced his feelings on Brexit on the other.

The German club listed on the program as RTHC Bayer Leverkusen, is a multi-discipline association. The RTHC stands for Ruden, Tennis and Hockey Club.

The much-anticipated King's Cup event will get going Friday. The eight invited military crews celebrating the centennial of the 1919 Peace Regatta will have their opening heats Friday. The US Naval Academy will face Canada in their first race at 3:30 PM.