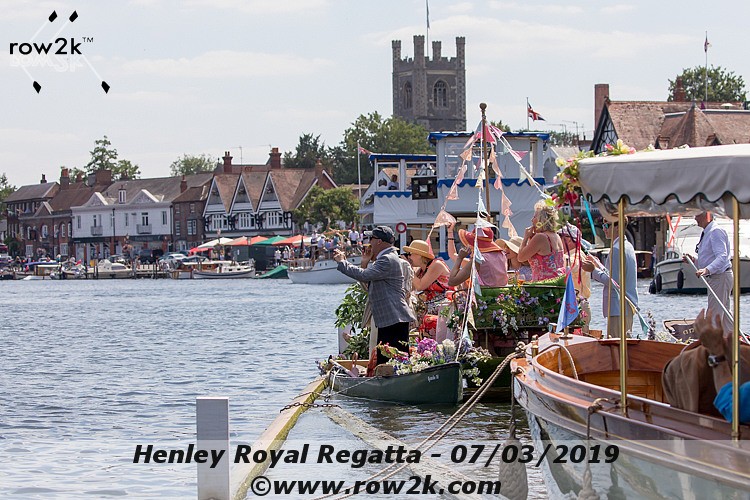 Friday at Henley Royal Regatta sees some of the tightest racing of the week, as crews from across the globe come head-to-head on Henley reach, in order to qualify for the unique chance to race at the weekend at perhaps the pre-eminent river regatta the world over. Every race can be watched live and on demand on the HRR YouTube channel, useful for US viewers, who remain five hours behind the local time in Henley.

09:00 - Race 6 - Temple - Northeastern A vs Northeastern B
Only a testament to the strength of the Northeastern rowing programme, this quarter final of the Temple challenge cup will see both crews from this phenomenal university face off in what promises to be tight, intense, and high octane racing.

11:05 - Race 27 - Temple - Newcastle University vs Brown University
Perhaps one of the most revered UK university rowing programmes - Newcastle University - will have their mettle well and truly tested against US favourites Brown University, who have so far shocked the Henley crowds. According to the umpire at Thursday’s race: “Brown were not pushed at any time”. Therefore we can expect a true US vs UK battle on Friday when the fate of these two crews will be decided.

11:15 - Race 29 - Goblets - Hamilton and Williamson vs M.C. Oyen and M. Steenman, NED
Arguably the most prestigious race in the pairs the world over, the Silver Goblets has once again attracted an international crowd, that means a US crew will face off against one from the Netherlands tomorrow. The Netherland’s pair have swept with ease past their competitors and “look forward to the challenge” of facing a tough US crew, who have also seen success over the last few days.

11:45 - Race 34 - Britannia - Mercantile Rowing Club, AUS vs Thames Rowing Club
In the fourth race of the day on Thursday, Thames Rowing Club managed to edge out on Royal Chester, to cross the line no less than 1/3 of a length over Chester. In an equally tight race, Mercantile took the win from Twickenham Rowing Club, having “stormed off the island”. Tomorrow, these two crews, separated today by less than 7 seconds will face each other, as we enter the latter stages of this event.

11:50 - Race 35 - Fawley - The Battle for Henley - Henley A vs Henley B
After two rounds of the Fawley Challenge Cup, it became clear that on home waters Henley would easily cast their opponents into their shadow. Whilst racking their boats, the Henley ‘B’ crew told row2K: “we’ve been behind them all season, but we’re looking to go out tomorrow and enjoy the race”. Whilst it may be true that the bookies favorite is naturally the Henley ‘A’ crew, their second quad won’t let them fly away too easily into the weekend.

14:20 - Race 45 - Diamond Sculls - M. Goretti, ITA vs H.D. Leask
At his first trip to Henley Royal Regatta, Goretti dispelled any questioning clouds that loomed over his talent when he came out on top of the local sculler Quitmann, from Twickenham Rowing Club. Perhaps unsurprising, as the Italian sculler placed second and third at the European Championships in 2018 and 2019 respectively. Commenting on his race, Goretti said “I just keep looking around all the time and thinking this is crazy - Henley is something special”. Tomorrow, he will face Harry Leask, who stood on the podium at the 2018 European Championships after finishing third in the double, he returns to Henley after coming back from a back injury, where he hopes to make his all important comeback, as he looks forward to Tokyo 2020.

14:50 - Race 50 - Diamonds Sculls - M.J.S. Schmid, SUI vs O. Zeidler, GER
A David vs. Goliath matchup in the Diamond Sculls. Schmid, the Swiss lightweight single sculler who finished 2nd at the 2018 World Championships, tips the scales at 12 stones. Zeidler, the German heavyweight sculler who made the A Final at last year's world championships and is the reigning European Champion,, weighs 16 stone, 3 pounds. Schmid should have his hands full.

15:30 - Race 56 - King’s Cup – US Armed Forces vs Canadian Armed Forces
As the two giants from across the pond make the trip to Henley, to commemorate the centenary of the 1919 peace regatta, Henley prepares to meet the might of the United States Armed Forces, as they attempt to claim the win, in this, perhaps the most historic event of the regatta. Speaking before the regatta on Monday morning. The crew told us how: “it’s such an honour to represent the whole of the US armed forces at HRR this year”. With such strong emotions surrounding this event, for crews the win will be sweeter, and the losses far more bitter.

17:30 - Race 66 - Temple - Boston University vs Oxford Brookes A
Brookes are a crew which need no explanation. Over the last few years they have crafted an almost untouchable reputation for producing the best ‘no fuss’ crews in the country. As they line up on Temple Island, however, they will face Boston University, another crew who have so far shown the Stewards why they flew from the other side of the Atlantic to race here, sending the press into a frenzy as they supersede all expectations.

19:00 - Race 81 – Temple - A.S.R Nereus vs Harvard
An all-international affair between Nereus and Harvard demonstrates once again the global appeal of Henley Royal Regatta. Nereus have stunned onlookers so far this week with technical perfection, whilst Harvard have lived up to their reputation of producing unrivaled amounts of horsepower. We remain interested, therefore, to see how these two styles stack up against one another, in what promises to be another dramatic race.