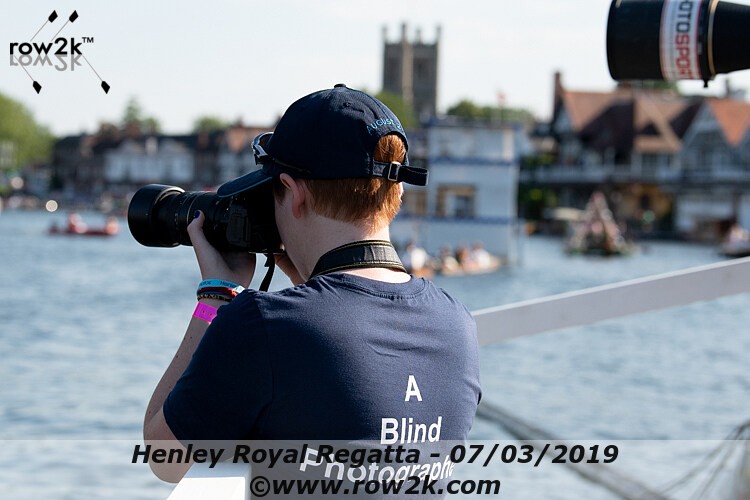 The photography stand on the finish line at the Henley Royal Regatta can get crowded and intense, jammed as it gets with the many rowing shooters, that come from around the world to capture the moments the iconic regatta produces, sometimes minute-to-minute.

It's not a place for a casual photography buff, and an 18-year-old girl just graduated from high school, wielding a single and obviously well used camera, might be in over her head. It might be even more the case if the girl was mostly blind, with just enough in one eye to make out different shades of light and color.

But Roesie Percy, who is an 18-year-old nearly totally blind, just-graduated high school girl, did not look out of place Wednesday afternoon on the finish line stand at Henley.

Sure, she got a bit of help from the gaggle of pros around her, but only so much that they made sure she had room, knew where to be positioned, and might tell her when a race was approaching when the level of noise from the stands makes it hard to hear the announcers. But, they do that for most newcomers to an event or situation.

But in this situation, many of the established rowing photographers on the stand yesterday where drawn to the fact that Percy was there, that she was daring to do what she was doing with the very severe limitations she has.

Face it, being a blind photographer is not for the faint of heart.

Percy seemed to take it all in stride, and answered more questions than she asked. She's a pretty good story, as sports stories go - disadvantaged person takes up something in a sport they were supposed to have no chance at being good at, and proves otherwise.

And that is the story of Roesie Percy of Bristol City, a British town in the UK's Southwest. Percy was born mostly blind, and she said there is no chance her sight will ever improve, but she comes from a family of photography enthusiasts and they got her ear.

"I got into this a couple of years ago," Percy said. "My family have always been into photography, not professionally, just to go out take a photo, etc. I started taking pictures with a small Sony and then in 2017, I set up a photography account because I thought, why not. I might as well try and turn this into something."

She started out taking pictures of cityscapes, people, and then turned toward sports photography. It wasn't long before she was getting published in a local magazine and then, "I got picked up by the Huffington Post, which was very nice."

Two year ago, Percy went to the Boat Race between Oxford and Cambridge, and got hooked on rowing. She even does a bit of rowing herself in Bristol City, but shooting rowing is what keeps her busy.

"I went to watch the Oxford-Cambridge boat race two years ago, and I just started wanting to photograph rowing because it was a sport I was passionate about."

The idea that a mostly blind kid headed to her first year at Plymouth University (to study photography, of course) might be leaning on the automatic setting of her older Nikon camera - she left the old Sony somewhere and was given an older, used Nikon D5100, which she became partial to - makes sense.

But that is not what she does.

Using what sight she can to make out shapes and color variances, shades of light, and the beep of the camera's focusing system to tell her when she has locked focus, Percy works the camera herself. And she does it at local and national rowing regattas all around Great Britain.

"I use the manual setting, and I adjust the shutter and aperture accordingly. If it's too bright, I put the aperture down. I don’t have a lot of vision, but I use the vision that I do have very well. I only have a little bit of vision in the corner of my left eye. But I think because, I've had it from birth, I've learned to use that very well and I use memory quite well."

Percy is going to be shooting Henley for the rest of the week. Her work can be viewed on her Instagram account, which is - of course - a_blind_photographer. 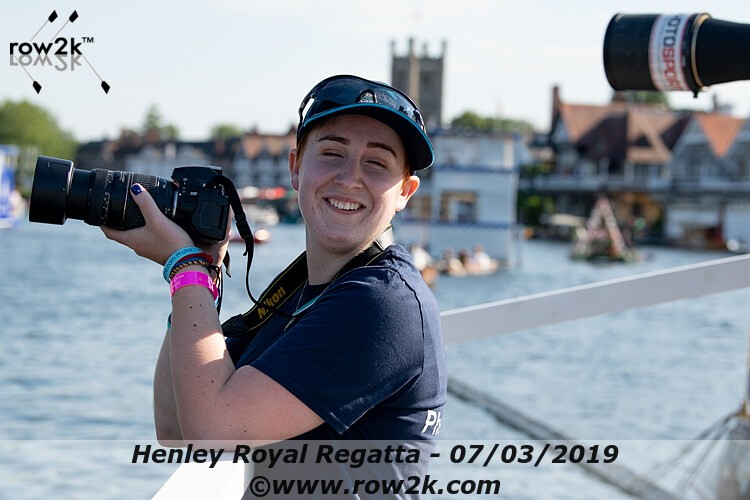