In a complex and quickly-changing world it's reassuring to know that Henley Royal Regatta changes very little. As a golden sun set on a blustery semi-finals day, Pimms was still being drunk, hordes of blazers and dresses were tripping into Lion Meadow for picnics, and top rowing racing had been on show all day. During Saturday's racing twelve different nations had earned places in the all-important trophy finals on Sunday, including five US crews. On Sunday large chunks of historic silverware will be presented. The game is on.

First, the weather report because yes, it does affect this regatta. The wind veered a bit on Saturday, at times more cross- than head-wind, and became more variable and frisky so times between races are less comparable than normal. Several times in the day a short sharp rainshower hit the course, and the recent rain was still coming down the river, making for continued slow times and a return to coaches' worries about difference between the stations.

After the last few days, you'll be relieved to hear there were no disqualifications. The nearest we got was a restart in the Visitors' Challenge Cup between the two most controversial crews of the day before. Cal's IRA winners were on Bucks, Oxford Brookes/Proteus on Berks, and with both finding steering tricky in the strong stream, they got entangled and had to stop just at the start of the boomed area after Temple Island. Cal were slightly further into the centre than Brookes/Proteus, but umpire Richard Phelps decided blame was sufficiently even for the race to be restarted from the stake-boats.

Both crews backed down slowly and then restarted after Phelps had checked that everything was intact. A fascinating race ensued, both crews overcoming the disadvantages of the double start to swap the lead twice. 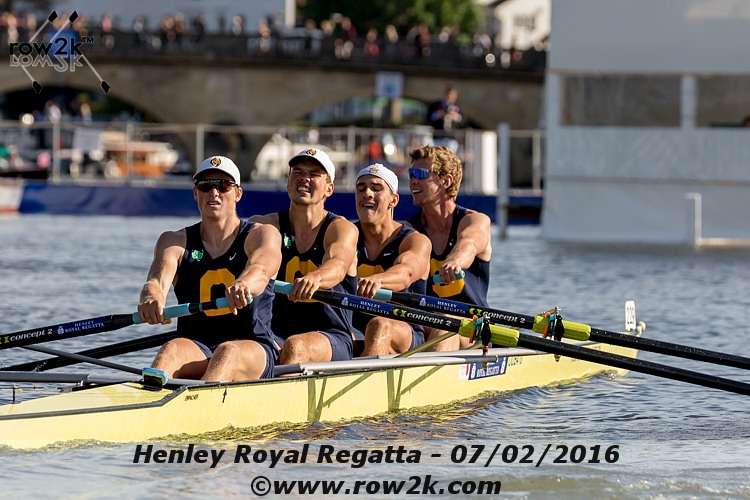 Cal had the better start, Brookes/Proteus an excellent mid-race push, and then Cal's superior power and cohesion took over for the win after a few worrying near-clash moments at Fawley. They will meet a Thames four of whom three won the club eights last year, but the Visitors, as Cal bow-man Nikki van Sprang knows well, is a much harder event. See the full show here.

Staying with the elite events, the renowned Leander Club is going for its seventh consecutive win in the Prince of Wales quads, with a completely new crew after their quickest quad was bumped up to the Queen Mother event. Having taken care of Lyon/Vichy in the semi-final, they now meet the Schuylkill High Performance quad who dealt expertly with Britain's likely under-23 combination, racing as Edinburgh and Durham.

Oh all right then, time to talk about the Temple Cup. This event, specifically for student eights yet barred to those who are Blues or the equivalent (eg Eastern Sprints or Pac-12 heavyweight varsity oarsmen), attracts the cream of university rowers. Since the year 2000 one of the most intense rivalries has been between Oxford Brookes and Harvard. The Crimson freshmen got the better of Brookes twice in the finals of 2002 and 2003, and now Henry Bailhache-Webb, who was at four and then stroke in those Brookes crews, is coaching his old university. After Saturday's semi-finals, in which Brookes cruised through the Yale lightweights and Harvard's JV turned a quick early lead into a decisive win over the Cal freshmen, we have another Brookes/Crimson final to whet the appetites. 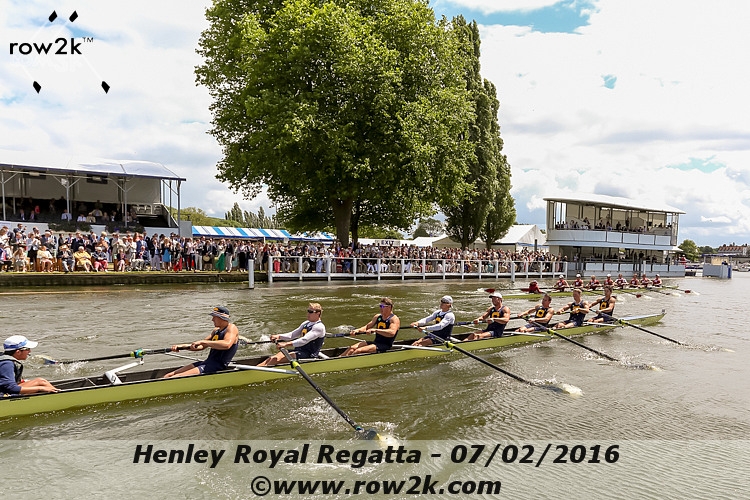 Over in the Remenham women's eights, the Princeton Training Center Olympic-miss crew easily saw off the Czech light/heavyweight composite, but in the other semi-final, to the crowd's astonishment the British development eight reversed the result of the Henley Women's Regatta final and turned the tables on Princeton University in one of the best races of the day, which bolsters the case for more women's events at HRR. Schuylkill Navy's high performance squad made a very creditable stab at trying to beat the fearsomely good Polish under-23 world champions in the Princess Grace quads, but were outgunned even though they made the Poles work for every single inch of lead. 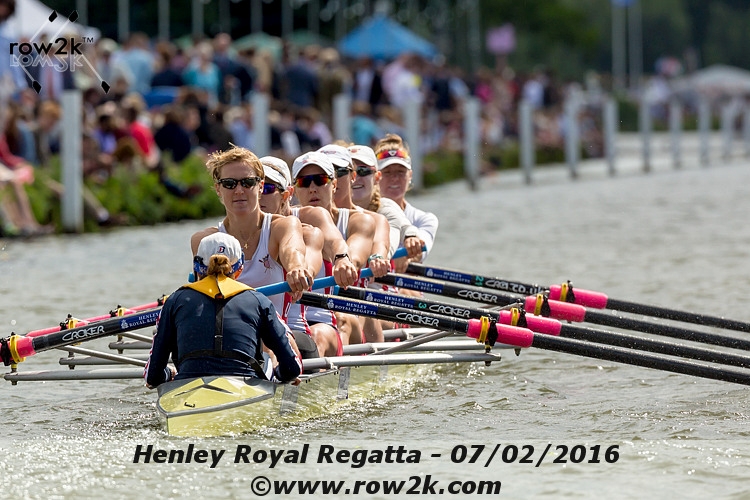 On to the small boats, and Dutchwoman Lisa Scheenaard meets German under-23 Anne Beenken in the women' singles final, Scheenaard having been unlucky runner-up to Mirka Knapkova last year. Beenken got to the final by beating Lithuanian Ieva Adomaviciute comfortably, but there's an interesting twist to that one.

Beenken and Adomaviciute are 'birthday twins', both born on 3rd December 1994, and both having rowed at junior and under-23 level. Until Saturday they had never raced each other due to swapping in and out of crew boats, and Beenken looked impressive beating the reigning under-23 champion. See their full race here.

Mahe Drysdale is quietly making his world-beating way to a sixth Henley Royal title in the Diamond Challenge Sculls, and looks likely to get a decent work-out against Belgium's Rio qualifier Hannes Obreno.

Drysdale admits he came to the Royal regatta to practice his starts, get some racing in wash-ridden water which may mimic the Lagoa de Freitas lake conditions, and because he fancies matching Sam Mackenzie who won the Diamonds six times. Drysdale had a straightforward semi against Dane Sverri Nielsen, while Obreno had to work hard to stay clear of Dutchman Stefan Broenink until about halfway.

One of the most bizarre races of Saturday was the Goblets semi between Dutch Olympic pair Roel Braas/Mitchel Steenman and failed German Olympic hopefuls Peter Kluge and Clemens Ernsting. Seconds after the start flag had dropped, Ernsting appeared to catch his blade deeply in the water and almost slew the boat over, before recovering. A few strokes later he stopped rowing, clearly unable to put full power in, and the Germans ended by paddling up the course slowly.

It emerged that one of the height clips on his gate had popped off, leaving the gate jolting up and down during the stroke and effectively giving poor Ernsting wildly variable pitch. He couldn't row a single finish properly and so the Dutch went through on a 'not rowed out' verdict. See the strange 'race' here.

There were several delays and hiatuses during the day — the geese were being particularly badly behaved and needed regular attention from the bird patrol boat which chivvies them back over the booms.

Then the booms started misbehaving — one came loose and there was an interruption of 20 minutes while it was tied back firmly into place, to avoid it coming loose and drifting off into the stream while a race was coming up the track.

That delay largely affected the big schoolboy contest of the day, Eton versus Westminster. This, the Princess Elizabeth Cup, is the event which gets more spectators dropping their Pimms and rushing to the riverside than any other, including the Grand. Although rowing is becoming dramatically more broad-based in the UK, the big rowing schools still put more energy into peaking for Henley than any other regatta and it pays off.

Westminster had won the UK national schools regatta ahead of Eton, but the result was reversed without fuss, Eton pushing competently past the boys in pink without breaking a noticeable sweat. This sets up a re-run of the Metropolitan final against defending champions St Paul's, who have five of their crew plus the cox back this year and won feistily against strong Australians Melbourne Grammar in the semi-final. See their matchup here. Nereus in the Ladies' Plate is most of last year's Temple Cup winning eight, and while they were strolling to a win over ex-public schoolboys East India & Martyrs, Leander's future GB prospects were busy re-racing the 2014 final against Cal's 2V, with both crews containing some who had been in that race two years ago.

Leander edged it early on, but it was tough in-fighting for the first half of the course as Cal refused to give up. However, by Fawley the Pink Palace had such a strong upper hand that they were well clear and being yelled at several times by umpire Sir Matthew Pinsent for drifting over and washing Cal down. Encouraged by this, Cal stormed back and closed the gap down through the Stewards. They still lost, but by only one length against a good crew, as did Utah in the Britannia coxed fours, against Sport Imperial which contains several British athletes currently at Princeton University. University Barge Club were unlucky to meet Oslo, who contain several under-23s, and lost gallantly by one-third of a length in the Thames Cup semi-final for the second year running.

In the Grand, British under-23 youngsters Nautilus pulled off an extraordinary coup beating Italy's World Cup silver-medal eight, while the Dutch Olympians, currently the fastest eight in the world this season, saw off the New York Athletic crew who entered more in hope than confidence.

The Queen Mother open quads will be a battle between the bumped-up Leander quartet and the mixture of Swiss, German and American athletes from California, who beat the GB senior lightweights by only three-quarters of a length after a tremendously brave fightback from the GB crew which was one of the best races of the day; see the full race here. 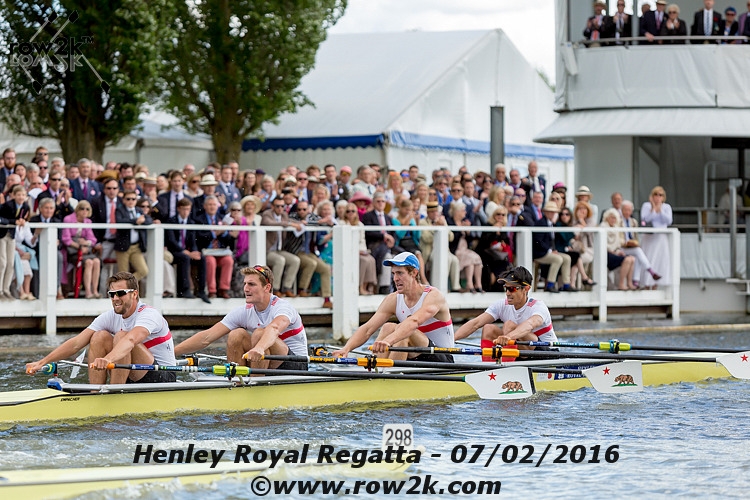 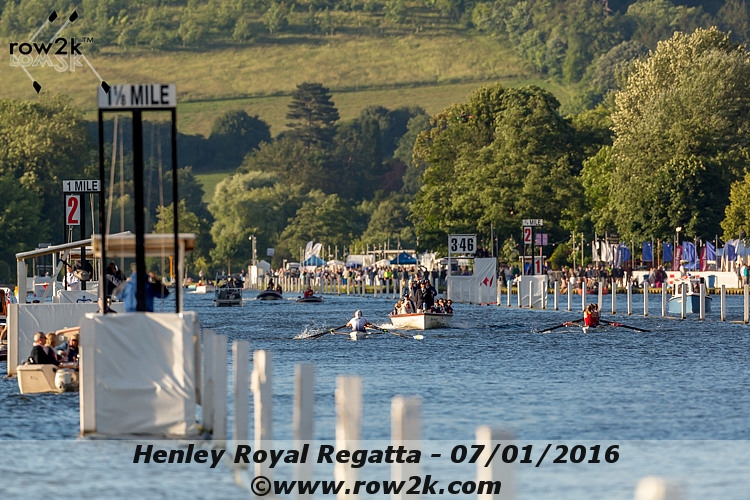