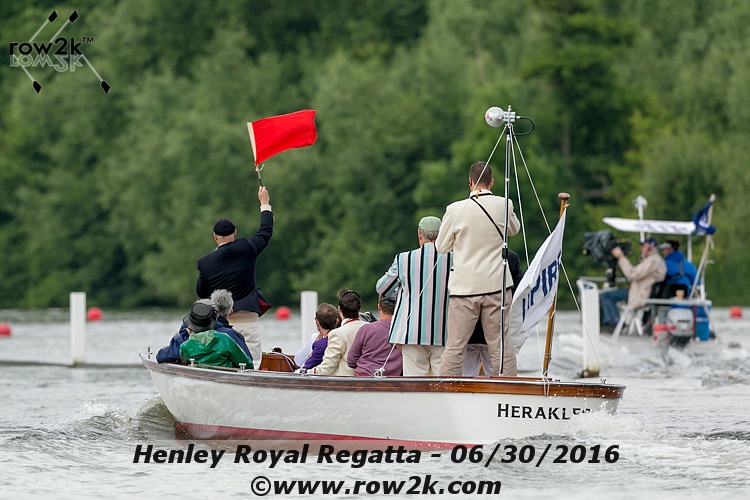 Given that the regatta that is both webstreaming and televising every stroke of every race, it might be a while before anyone says "rowing is boring" after today.

Any thought those with Thursday-morning hangovers might have had of a crafty nap in the deckchairs was shredded with race 11, one of the most controversial of recent years. Norwegian club Oslo (steered by Northeastern coxswain Alex Gass) were being leaned on hard by Sydney, coached by former international Donovan Cech, when they clearly decided they'd had enough of the Australians blatantly encroaching on their station. On went the Oslo rudder, up went Gass's hand, and contact was forced by Oslo steering into Sydney, who were being warned by umpire Boris Rankov, he of Boat Race fame, at the time. Red flag time.

"I warned Sydney several times for drifting over, and then they actually hit Oslo while I was warning them," said Rankov. "Oslo were on their own side all the time." "Sydney had been warned from the very first stroke of the race pretty much," said Gass. "Eventually they came too far into our lane, blades clashed, and because they were in our lane, they got disqualified." We-ell, that's a little disingenous, since the whole world can now watch the replay and see that contact wasn't initiated until Oslo swerved noticeably across to the right-hand side of their waterspace.

It was, of course, entirely justified. Oslo had been right beside their booms with Sydney hogging most of the rest of the water and Sydney had been warned at least six times before Oslo got fed up. It might have been possible to force the bump with a tad more subtlety, but it's hard to blame them for making the poor steering absolutely plain. However, when Rankov's red flag came out, waved twice in a semi-circle over his head, neither crew stopped. "We didn't stop because they hadn't - in the heat of the moment we weren't sure so kept on racing," said Gass.

"When my stroke man told me to move over I moved straight away," said Sydney cox Kendall Brodie. She said she hadn't heard the umpire's shouts. "It shouldn't be up to the stroke man to see flags wave," she added. "If I'm driving the ship and I can't hear the call, I won't know when to move over." Cech later lodged an appeal proposing that it had been Oslo who hadn't "held their proper course" because of the sharp steer, but this was rejected and the original decision upheld. And the whole damn lot is now on YouTube, although note that the overhead view doesn't show the Sydney-side boom position clearly through the trees so estimating degree of encroachment isn't easy.

Another hiccup threatened immediately after the race, when Oslo stuck hands up to ensure their protest was noticed. When Rankov confirmed Sydney's disqualification, the Aussies decided to argue. A tetchy discussion with Rankov ensued (all audible in the YouTube video clip), and he briefly threatened to turn the interference DSQ into one for unsportsmanship.

The HRR video of the exchange shows him unwisely using each finger in turn to count off the reasons for the DQ - and a screengrab of Boris looking as if he was flipping Sydney the bird briefly did the rounds on social media. "Not the most sensible way to count on your fingers" was a fair comment.

You can see the whole race here, and the testy exchange and unfortunate hand gesture here (as noted above).

That wasn't the end of the cranky steering: five races later (and with Rankov in the hot seat again), Thames B and Tideway Scullers were stopped soon after Temple Island after clashing badly in mutual water – see the full video here. As is often the case with coxless boats the race was simply restarted, and Scullers won but with no times taken. 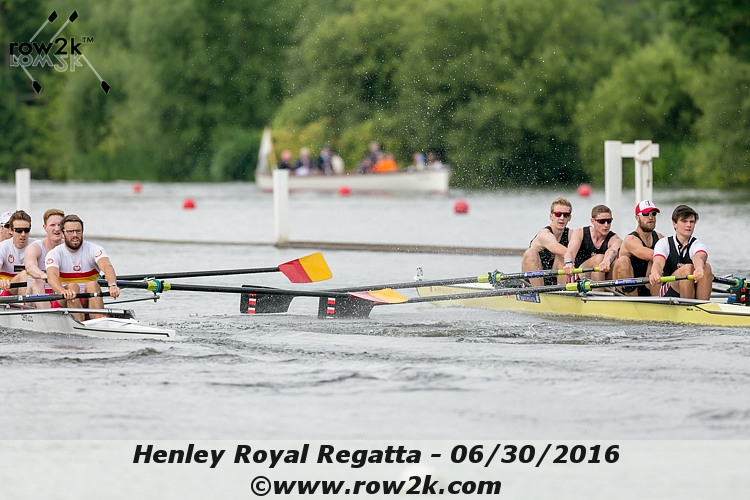 The Yale lightweights also benefited from a boom clash by Nottingham, a bit of which you can see here, while Germania were lucky to tweak the buoys rather than the booms in the Fawley.

But these are just taps compared to Christiana's encounter with the booms - there's steering issues, and then there is this – put down your coffee cup before watching.

Christiana's boom plant ultimately caused the race to be declared "not rowed out."

Several coxed and coxless crews were warned sternly for poor steering, and a couple of winning coxes taken aside later to be told that veering around would no longer be tolerated from now on. Wayward rudder use, sometimes deliberate, is way more common than romantics would like. However, sometimes the problem is just generic steering trouble: Leander's women's club quad proved a problem to steer for retired international Debbie Flood (steering from the three-seat, not an easy task) although they beat the Wallingford/Glasgow composite handily.

The head-wind remained sharp all day, but a bit of sunshine brightened Henley moods and there were only a couple of very light showers. One cheerful international was Mahe Drysdale, who is attempting to match Sam Mackenzie's record six Diamonds win, but was held up both before and after his flight from Ljubljana to the UK. Diverted from Stansted to Luton he was locked in the landed plane for ages waiting for a return to Stansted (which he describes here), but did eventually get to Henley.

There he was drawn against the unlucky Cédric Berrest, who could have hoped for a more enjoyable draw as a fully fledged international, albeit one who didn't manage to reach the FOQR final. Berrest slammed it for the first quartermile but then folded, knowing he couldn't outgun the big Kiwi. See the full video here.

Elsewhere in the Diamonds race-off winner Tom Graves met fellow unsuccessful Olympic triallist Greg Ansolabehere for the third time this season. Ansolabehere confirmed the results from qualifiers with a one-length win over Graves and set up a Friday match against Belgian Hannes Obreno. See the full video here.

The best race however was that between Germany's Runge and Slovenian Hrvat, who kept swapping the lead before Hrvat eventually got the upper hand; see the full video here.

[There were several red faces in HRR on Wednesday night, as it has emerged that qualification times — for the successful crews — were published online for half an hour. Naughty naughty. They were rapidly taken down, but not before loads of rowers had got busy with the notepads. Tempting to wonder why the many coaches who always claim they time qualifiers accurately have suddenly fallen silent...]

There was plenty of good racing and some superlative-looking crews. Eton College had to work hard keeping the rating low enough not to beat Shrewsbury by an 'easily' verdict, Harvard's JV continued their unbeaten run with victory over Russian students St Petersburg, Cal's frosh held off a courageous Drexel varsity that has been plagued by a norovirus this week, and Westminster School beat Brunswick. Columbia beat Bath University in the Temple, and will face one of the even favorites Oxford Brookes A today in what is expected to be one of the best races of the day. 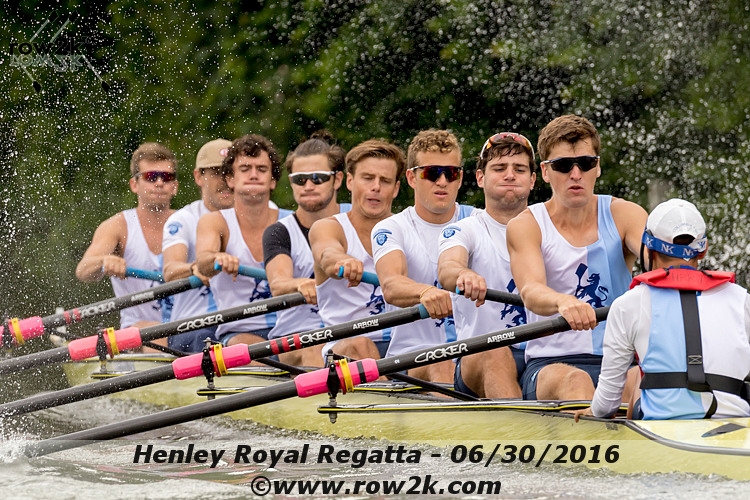 In an all-US race, Jesuit College got the better of St Paul's Concord in a storming race, but Melbourne Grammar (Australia) nearly had their bluff called by St George's College after lowering the rate too much. They hastily pushed to stay in the lead, and are a better crew than that but it was an amusing moment.

George Washington duffed up Cambridge's development four in the Visitors on their first visit to the Royal Regatta, and Grand Valley State had a class win against Durham in the Prince Albert coxed fours, where Yale and Drexel also won reasonably comfortably. 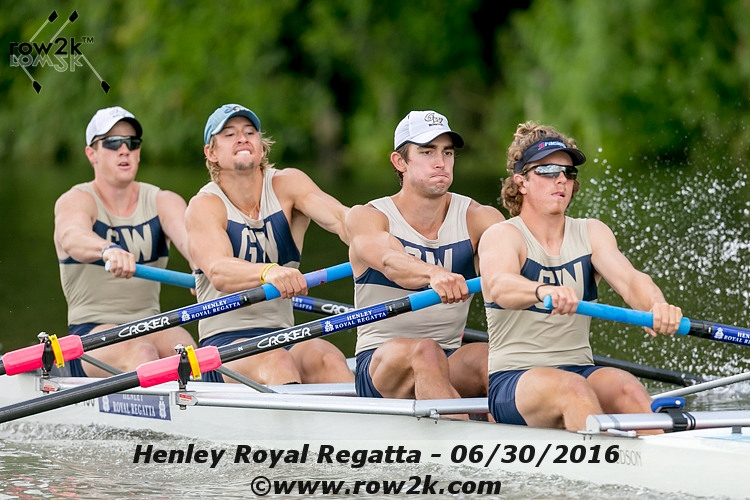 And so on to day three, and the little red boxes are starting to feel as if they're coming just a bit closer....