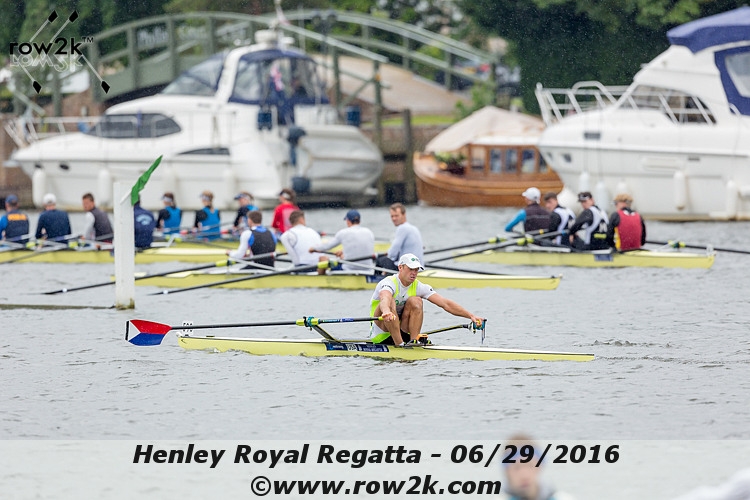 The weather gods weren't in a good mood on the first day of Henley 2016, but with bewildering stoicism, the Brits and their rowing friends from around the world turned out in droves to watch the first ever televised day of opening heats from the riverside. Chairman Sir Steve Redgrave's rueful remark that he'd rather be telling everyone 'jackets off' as he did on Wednesday 2015 than 'coats on' to the umpires as he had to for Wednesday 2016 acknowledged the one aspect of Henley completely outside his control.

That wasn't a typo by the way - Henley Royal is indeed on TV. Have we time-travelled 200 years into the future all of a sudden? After the success of the 2015 YouTube operation, Sheriff Redgrave and his posse slung on their holsters and signed a deal to take the venerable event wholesale into the wild west of broadcast sport.

So for the first time, live action of the Thames B and Molesey B coxless fours racing to a 3.75-length win for the latter, complete with a booms smash, was visible outside Henley without having to use the internet. Wonders will never cease, and several sections of the enclosures have had a face-lift which the cynical might assume is related to the newly public nature of the regatta. Sofas in the Regatta Café, whatever next.

You might have thought that easier couch-viewing at home, combined with vindictively persistent showers which added damp misery to the penetratingly bitter head-wind, would make for tiny audiences. Surprisingly, the banks boasted bigger crowds than usual on a Wednesday. 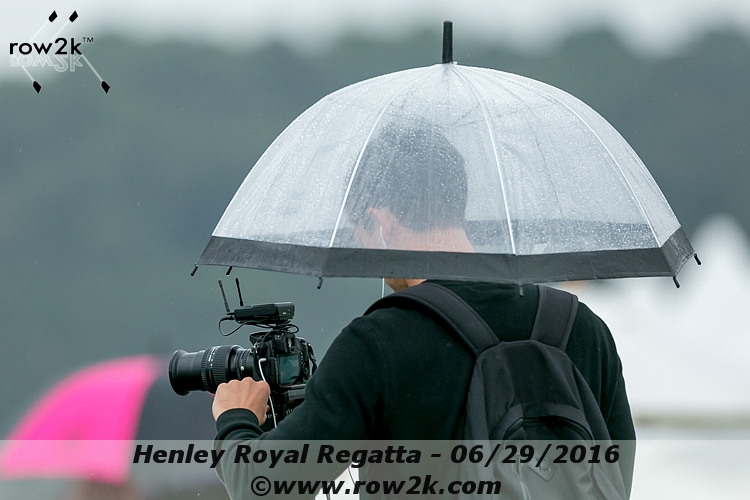 For a cold and rainy midweek day, the grounds were truly swarming with people; this was arguably the result of the greatly increased entry count, as the most crowded area was the boatyard, where swarm after swarm of blazers and umbrellas cheered off crews at the launch docks, and cheered and consoled them at the return docks. It would seem that the regatta's attempts to increase visibility and relevance are getting some traction. Or perhaps they just wanted to be on TV.

A stiff head current, stiffer headwind, and on and off drizzle and outright rain conspired to create conditions described as "variably horrible" – an assessment apparently shared by the drone operators, who grounded their copters for a few long patches during the day.

Those drones which gave such inimitable footage last year were playing shy though, banned from operating until mid-afternoon - because their rotor blades might spray high-velocity droplets on crews and launch.... Once back in flight later in the day, the views were spectacular. This year there is a fleet of drones, not just one, and their newly-built base platforms above the traditional marker points have given welcome shelter to the poor volunteers hauling ropes up and down in all weathers.

As is often the case on Wednesday, there weren't very many close margins, with speed and ability differences between crews exacerbated today by the strong head current and headwind, which tended to put even more distance between unevenly matched crews. But there were a few, including one that saw two crew members carted off in wheelchairs, lolling around from side to side on the way to the medical tent.

And sadly the crowds weren't there quite early enough to see the best race of the day, a 9:35am one-foot verdict for Stratford-upon-Avon against Kingston in the Brit Cup (club coxed fours) after a tensely-fought battle (see the video here). Very fitting for the 400th anniversary of Stratford's great Bard, William Shakespeare. Maybe their coach recited Shakespeare's Henry V Agincourt speech to them before they pushed off.

Tom Graves grabbed the last spot in the Diamonds which had opened up when there was a late withdrawal before Saturday's draw. He did it by powering through 15-stone Oxford Blue Josh Bugajski, who competed for GB at under-23 level a few years ago. Bugajski, the heavier sculler, did his best to make the conditions work for him but wily Graves weathered the British storm and hauled back through with perfect race-pacing to earn himself an outing today against Potomac's Greg Ansolabehere.

The official race description says "Bugajski stormed off to an early and what looked to be a commanding lead only to be hauled back in the difficult conditions by Graves who went on to win comfortably." You can see the full race video here.

Doing battle with more than their opposition were several crews who found the challenge of staying straight in a feisty wind more than they could handle. Old Dubliners Lady Elizabeth clonked the wooden course-side booms against Tideway Scullers in the Wyfolds (which the British quaintly call the Wyfronts), Molesey B had a similar hiccup against Thames B, and University College London's cox inexplicably steered them into the booms just before half-way (the wind wasn't that strong, honest).

The junior women's quads as usual steered and sculled impeccably, apart from the race between Shiplake Vikings and Northwich which got a bit complicated. First Shiplake started veering about, earning warnings from the umpire, and then Northwich appeared to catch a crab, putting paid to their chances.

You can see some of the adventures with the booms in the replays; this one is complete with a slow-mo section when the Lady Elizabeth crew hit the booms directly in front of the video launch.

Continuing the ambulance chasing, another booms clash in race 65...

And another in the Thames v Gloucester Fawley race – this one is brutal to watch, but may be the smoothest recovery from an over-the-head vertically-spiked oar crab ever.

Earlier in the day, Cornell B was also the beneficiary of a careen into the booms by Oxford Brookes C; the video skips from showing Brookes get a lead at the start and cuts to Cornell ahead; in the interim, Brookes had smashed the boom, allowing Cornell to slide through once and for good. See the (almost full) video here,

The big reveal of the day was meant to be the historic event of the first ever female umpire Stewards taking up the red and white flags, but it was stymied by an unexpected issue in the morning. Former Olympian and world champion Sarah WInckless could not supervise the planned junior quads race 5 between Kingston and Bedford Modern when it had to be delayed to give Bedford time to find a substitute for an ill oarsman. 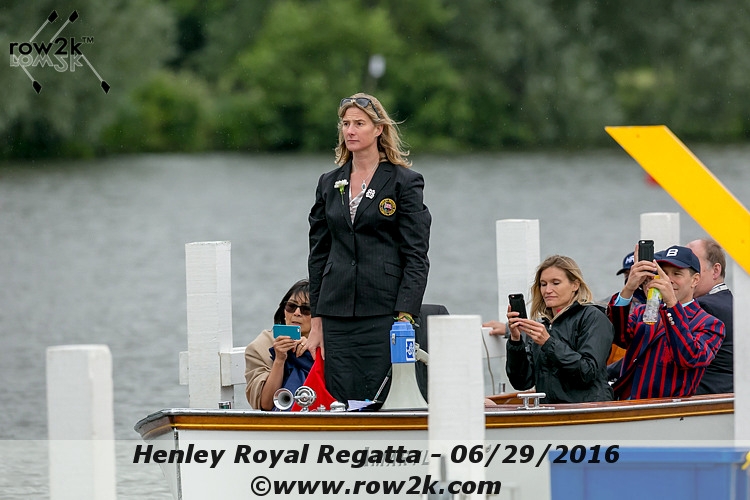 So instead she was diverted into the next launch and took over signalling duties for Sydney versus Molesey B in the Thames Cup. That should have been a doozy, but after Sydney caught a near-boat-stopping crab off the start, for a moment looked tricky. Then the natural order reasserted itself as Sydney's power surged through and they went back past the Molesey second-stringers. Cue celebratory woman-holding-flags pictures, even though it's a full 27 years since the first female Steward was actually elected. See the full race video here.

There was a rumour circulating that Ruyton Girls' School from Australia had beaten a boys' crew in fair competition, but even if true it can't have been a very good boys' crew after they were steadily taken apart by National Schools bronze medallists Headington, whose coach Ryan Demaine was also celebrating his birthday. Demaine was magnanimous in victory, saying that Ruyton were 'a semi-final quality crew' (what does that make his girls?) and playing down the fact that his quad had just beaten a team previously undefeated since February 2015 - see the race here.

D'you know what? Henley Royal Regatta is bursting at the seams, even allowing for the popularity when suddenly every club thinks it can win a little red box. A record number of entries this year - a jump of 77 more than the previous best - and number of countries (27 to the 22 four years ago) means the boat-racks and the trailer park are stuffed full. I give it a day before those who've been ignominiously despatched to the Enclosures are asked to kindly remove their superfluous shells a few days earlier than usual.

A packed programme of 311 separate races has expanded the racing day, and the Stewards decided to break their own event-size rules and add extra qualifying slots to three events: the Princess Grace women's quads, the Diamond Jubilee girls' quads, and the Diamonds men's singles.

The other change has been the decision to allow a limited number of previous club-event winning athletes into Thames and Wyfold crews. The motivation is probably to encourage people to stay with their clubs and pass on their winning habits, since the earlier rules encouraged the formation of club-busting composites in the so-called 'elite' events (Visitors', Prince of Wales and Ladies' Plate). So far only a small number of clubs have taken advantage of this, but it's a carrot which should improve the standard of these events in the future without letting successful crews unnecessarily hog the limelight.

In other news, a Russian from St Petersburg University caused consternation when he sauntered into Stewards during the morning wearing shorts and a t-shirt, in clear defiance of the usual smart dress rules. He hung about for several races in the morning before sauntering back out through the committee lawn (a holy of holies where mortals usually fear to tread), without being accosted. Mind you, the gatekeepers got a rollicking later for having let him in and being conned by his shameless self-confidence, so they made up for it by not letting in an elderly woman rocking a style somewhere between hobo and bag lady, later in the afternoon.

And we got through nearly the whole day without mentioning the referendum. 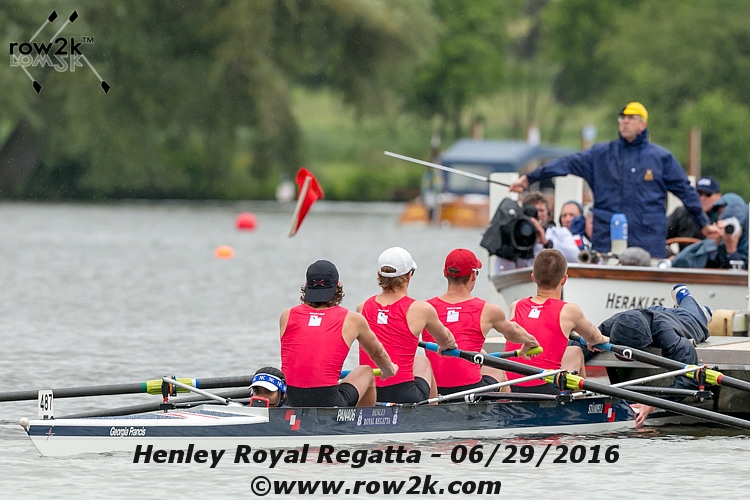