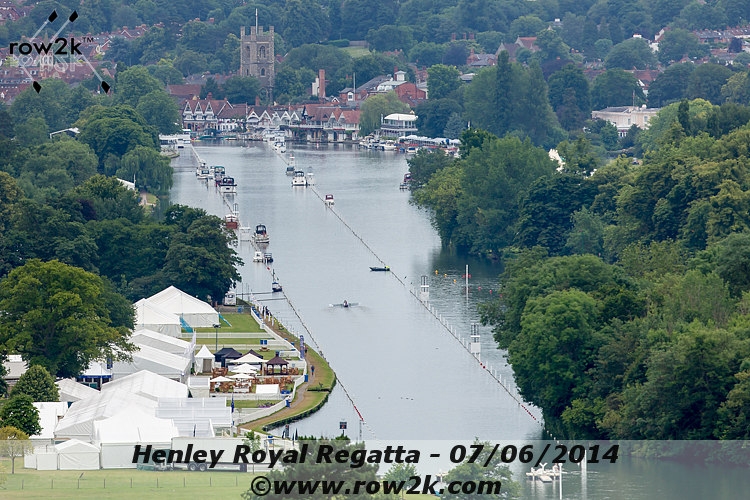 Since row2k has seen fit to let me loose on his Henley blog for a second year running, I'd better start by explaining the tweaks to the Royal Regatta in this, its 176th incarnation.

Number one, there is a new chairman: the retirement of the strategically-minded, judicially (and sometimes severely) fair and genial golf fiend Mike Sweeney has opened the way for the promotion of Sir Steve Redgrave, the 11th chairman of the event and only the second to be elected. The regatta often takes on the character of its head, and there is a more daring and relaxed feel to it already, starting with Redgrave cracking a few jokes at the draw on Saturday. Since he is not a qualified umpire, it will make the rare appeals to the Chairman (the only recourse if you are certain the race umpire's got it wrong) more interesting.

The other huge change, which was already in the works under Sweeney's watch, is the live broadcasting of the racing starting on Wednesday. A team of Stewards and HRR staff, led by GB internationals Neil Chugani, Sarah Winckless and Sir Matthew Pinsent, have developed a 10-camera filming system which will allow races to be broadcast live on the HRR Official YouTube channel with less than a minute's delay. There will be a highlights package put online each evening, drone footage is rumoured, and the icing on the cake is that for those in the UK, the finals coverage will be taken by the BBC on Sunday and shown on the red button and on BBC Online.

Unlike the brief and expensively unsuccessful attempts to televise Henley Royal in the 1960s and 1970s, this venture looks likely to stay, since online availability will give it a potentially huge audience. A royal roster of commentators is involved, from the top TV and radio rowing natterers of the nation as well as the best of the sport. Martin Cross, the best rowing voice on the airwaves at present, is a mainstay, and will make up for the lack of Regatta Radio (whose demise, hopefully for only one year but potentially for more, may have been accelerated by the new broadcasting plans). The downside is going to be the entire local 3G network, which is never very robust during the regatta, going down as on-site spectators attempt, against the pleas of the Stewards, to connect tablets and smartphones to YouTube.

Will it change things for crews? Probably not, though they were warned to be aware that the cameras pick up sound, so sweary stuff while you're being beaten by ten lengths might just end up being heard by hundreds of thousands. And you're going to find out just what the Stewards really think about your racing. It might start feeling more intrusive if they film in the laid-back boat tents area, where boatmen polishing carbon fibre rub shoulders with blazered alumni politely clapping their crews off the rafts.

Another thing to note is that Britain is currently in the grip of looks-like-becoming a heatwave (average temp in the country more than 5 degrees C above normal for 5 days), and so we are in full windows-open, no-sheets-sleeping, where's-the-rain-gone mode. It will be back apparently - by Thursday some areas will get the odd thunderstorm, which will mean fun and rescheduling games if Berkshire catches one. But it's steamingly hot (the forecast is for 34 C/93 F for Wednesday), and so one of the first games we can play at Redgrave's first regatta in charge is 'when will he take his jacket off.'

For those who haven't been to HRR, this is not the facetious remark it might seem. Although bankside spectators dangling their feet in the water near Fawley can wear what they like, the Stewards' Enclosure sticks to traditionally rigid rules which involve gentlemen remaining jacket- or blazer-clad. Until, that is, the Chairman decides to take his blazer off, at which point, like the Queen sitting down, everyone else can follow suit. Boy is it nice being female at hot-weather Henley, where bare shoulders are practically de rigeur. Sweeney used to specialise in waiting as long as possible on principle, and with 30+ degrees C forecast for Wednesday, the loungers at the Bridge Bar will be delighted if Redgrave goes easier on them.

OK, enough of all that - what about the competition? The open events feature a classy selection of internationals from nine countries, with the Greeks coming to play in the Stewards' coxless fours, Canada's women in the Remenham eights, and Mahe Drysdale and Mirka Knapkova in the singles, each going for a fifth win most people would not bet against. South Africa is mounting a charge in the Stewards with a neat hybrid of heavyweight muscle power from Vincent Breet and the extraordinary cancer-beating Lawrence Brittain, stroked by Olympic champion lightweight Sizwe (usually called Lawrence) Ndlovu, while their lightweights are in the Double Sculls.

Britain is trialling two potential coxed pairs as M2- in the Goblets alongside their European champion pair of Matt Langridge and James Foad, and the signs look good for a GB versus Germany match-up in the Grand Challenge eights on Sunday. Meanwhile the revamped GB women's quad will have stiff competition from Stanford and Brown in the Princess Grace event.

As usual it is the big club and student events which promise the best racing. The Stewards have gone bananas and selected everyone and his dog this year, but that didn't stop St Paul's and Abingdon, both former winners, going up against each other in the first round of the Princess Elizabeth school eights. That is a juicily packed event this year, featuring British schoolboy champions Westminster, Canadian supremos Shawnigan Lake School, US national school winners Salisbury School, NEIRA's runners-up Andover and SRAA victors Gonzaga High School. Not to mention the unknown quantity of Ratsgymnasium Osnabrück, poised to cause havoc in the lower half of the draw.

The Temple student eights are a little depleted, with most of the US entries lightweights this year, up against a new Oxford Brookes eight apparently even faster than their trophy-winning 2014 predecessors, the University of London, the ever-dangerous Dutch Nereus, and Lyon from France. By comparison the Ladies' Challenge Plate is stuffed full, and local hopefuls Leander may have to raise their game against Yale, Princeton, Melbourne and, of course, Washington.

The fours events - Visitors for coxless and Prince Albert for coxed - allow students a different challenge, and one which clubs are increasingly embracing. I don't hold out much hope that the UK can keep the Prince Albert title this year, with Cal, UW, Yale and Harvard in the mix, but at least this year there are 24 spaces in the draw. The Visitors' sees Sydney, who rarely bring a sub-standard crew, join the big names, and a similar opportunity for clubs and students to race together appears in the Prince of Wales quads, where the University of Virginia combine with Potomac to go up against a feisty Molesey/Scullers combination and two likely-looking German crews.

That's not even a beginning, but as I seek my bed, I know that in less than nine hours time the first crew - either Cantabrigian's eight or Marlow's - will be knocked out of the 2015 Regatta, and the intense five days of racing, during which 526 crews will be whittled down to 20 ecstatic winners, will begin.

Henley Thursday: Making the Most of Chances
Get our Newsletter!
SUBSCRIBE
Support row2k!
If you rely on row2k, please support row2k!
Advertiser Index
Advertise on row2k