Over 170 of Great Britain’s rowing Olympians, going back as far as 1948, watched as young rowers from around the world showed their future potential in today’s finals at Henley Royal Regatta.

The group were brought together for a reunion at the Regatta. The day began with a row-past by British Olympic medallists in the royal barge Gloriana, which has been moored at the end of the course all week. The group included two of the eight that won silver when the Olympic regatta was held at Henley in 1948.

No current British Olympians were on display at Henley this year as they are all on training camps ahead of the London 2012 Games.

The only crew at Henley bound for the 2012 Olympics was the German women’s eight, who suffered a two-length defeat at the hands of a Canadian development crew on Sunday, but several young British international hopefuls impressed and there was some thrilling racing in the junior events, including Abingdon School’s second successive victory in the school-boy eights event.

“The Regatta has been below Olympic standard for very understandable reasons but for the Under-23s it has been fantastic,” said Sir Matthew Pinsent, a four-time Olympic champion and Regatta Steward.

“You won't find many people on the podium at London 2012 who haven't been through Henley once.

“Besides the British, the Americans love it, the Australians seem to have come in force this year, the Dutch and the Germans are here. Hopefully we'll get them to come again and again.”

There were victories today for two crews likely to race for Britain at the European Championships in September, the first step towards the 2016 Olympics in Rio de Janeiro.

That was the second win of the day for Henley-based Leander, who were also victorious in the Prince of Wales Challenge Cup for quadruple sculls. Two of the Leander quad, Nick Middleton and Jack Hockley, won their third successive titles, beating the likely Great Britain under-23 crew from University of London and Durham University.

However, Leander could not hold off a Harvard University eight containing three British oarsmen, who won the Ladies’ Challenge Plate final by one foot with a huge surge in the last 50m, securing their third win in the event in six years and denying their rivals what would have been their third in nine.

Harvard’s British stroke Patrick Lapage was watched by his grandfather Michael, one of those 1948 Olympic medallists.

“He won a race like that by the same margin in 2007 so I was pretty optimistic he could do it,” said Michael Lapage.

Patrick said: “The last 10 or 15 strokes, my eyes were locked onto the boat. You just don't want to lose a race like that.”

That blistering race was three seconds faster than the Grand Challenge Cup final that followed, a California RC eight made up of US oarsmen who missed out on Olympic selection beating Brown University.

Abingdon School beat Radley College in a fiercely contested Princess Elizabeth Challenge Cup final, a three-quarter-length victory securing for the second successive year the “Triple” of wins at the Schools Head, National Schools Regatta as well as Henley. “We said if we got National Schools and Schools Head as well, that would be brilliant but the focus was always Henley,” said their coach, South African Athol Hundermark.

Sir William Borlase's Grammar School won the Fawley Challenge Cup for junior quadruple sculls for the first time in their own right, beating Marlow Rowing Club 'A' by an emphatic 3 ¼ lengths.

Australia’s National Centre for Rowing Excellence secured two victories ahead of the Under-23 World Championships in Lithuania later this month, beating their New Zealand counterparts in the men’s coxless fours and a Dutch development crew in the women’s quadruple sculls.

On the final morning, the schoolgirls of Henley Rowing Club won the inaugural Junior Women’s Quadruple Sculls and there were two more new names in the record books. They beat Canford School by two and a half lengths, and 17-year-old Joanna Unsworth in the three seat said: “I think we're the first people to scream at that pitch on the finish line.” 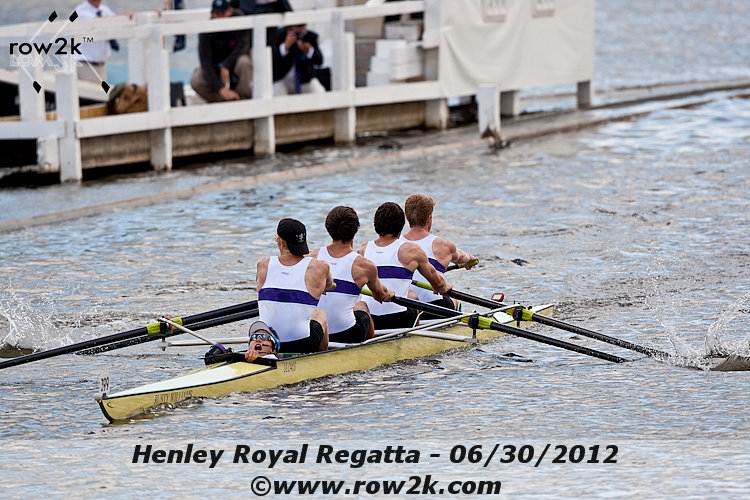 Americans dominate eights but Brits battle through
Get our Newsletter!
SUBSCRIBE
Support row2k!
If you rely on row2k, please support row2k!
Advertiser Index
Advertise on row2k