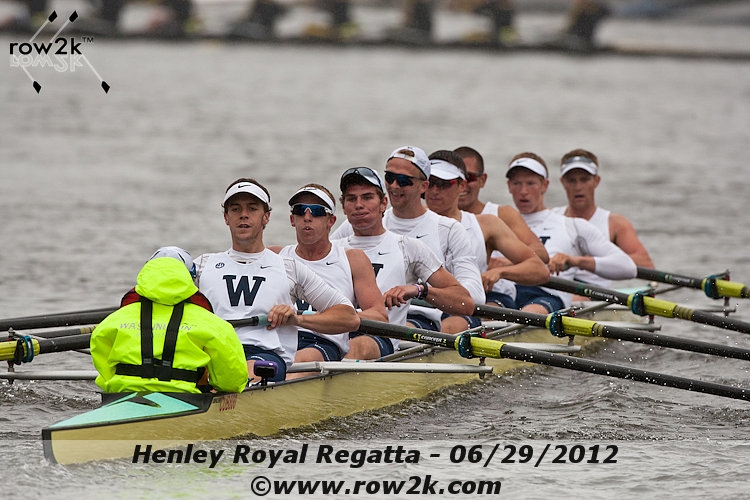 "This is not a regatta for lightweights," was overheard at the Steward's enclosure this afternoon at tea time (this from a former US National team rower). Very appropriate, with the wind acting as deal breaker for some smaller crews, including Andrew Campbell, Gonzaga HS, and the Harvard lights. Even for the heavier crews and more skilled coxswains, the refrain "the conditions have been really tough" has been heard repeatedly.

To wit, the Harvard Lightweights fell to Washington freshman this evening sesssion, with about 30 pounds separating their boat average weights. The IRA-winning Washington freshman never lost a single race in the spring, and continued this trend in Henley. Coached usually by Luke McGee ( who is coaching the U23s in Seattle now), Washington Head Coach Mike Callahan took charge of the athletes, who will soon be his varsity rowers, for this event.

Earlier in the race card, Brown University Junior Varsity had a very close race with St. Petersburg Rowing Club, Russia. "It was a dog fight," said Brown 5-seat Jacques Greenberg. The recent graduate raced the Temple as a freshman and 'made it to Sunday' then, and he made it now after beating the Russian crew Saturday. "The wind made the rating come down a bit, but it was low and powerful, we had to pry on it," he adds.

"Our coach said, 'listen we have no idea what we are facing, just trust your training,'" said Greenberg of Paul Cooke. "It was a tough race, like a heavyweight boxing match," said 2-seat Tyler Sheffels. "We had to try and stay internal, conditions have been a big factor," he summarizes. Sheffels was in the Temple as a freshman too. Seven-seat George Whitridge feels this win was a good culmination of some tough racing during the spring season. When asked about keeping rating in the wind, he said, that it wasn't really about the rating, it was more about "just following our stroke Carter Aronson and trusting that the guys behind us could find something extra."

The double sculls entry of Cowles and Whelpley lost in this semifinal round to Berntsen and Grepparud of Norway; we will try to find them in the boat tents or Stewards tomorrow to find out more about thier Henley experience. Congrats to them for making it to Saturday, and feel free to stop at the press office to chat.

Best to all, they are closing press tent for fireworks tonight, so more tomorrow. Quick note: Half of the US crews from today made it to finals, and will be racing in only 3 races. Two US Crews in Temple: Washington Frosh and Brown Univ. JV, and two in the Grand, California Rowing Club and Brown University, and Harvard Varsity in the Ladies. Row2k will certainly also follow up with the gals from Western Rowing Club in the Remenham as well.