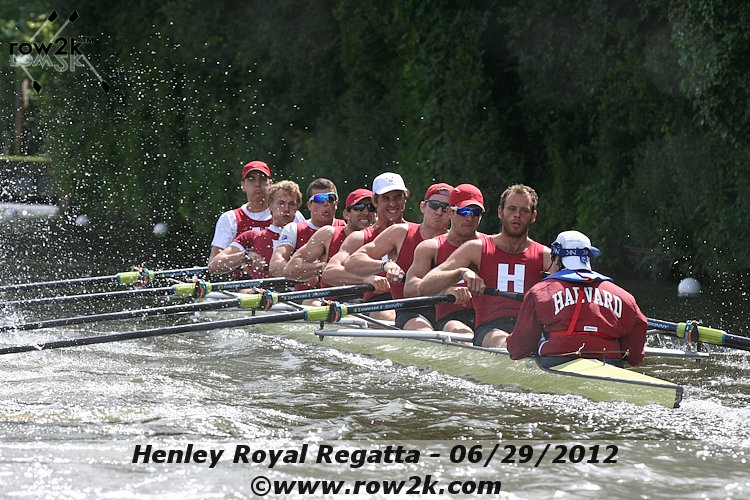 Andrew Campbell had a challenge after so many races in wind this week. The 154-pound athlete, 20 years old had battled larger and more seasoned athletes in recent days and in fact years--that was not new to him. But at the first race to start the afternoon Saturday, it looked like fatigue and power of the opposing athletes got the best of him. Campbell started very fast and at a high rating, and was ahead by a 1/2 length at the barrier, but by the next marker on the course, Peter Lambert of South Africa had pulled ahead by 2 lengths, and there was a cost for Campbell trying to catch-up with a senior national team rower in tough headwind, it never happened. Campbell struggled to get the rating up, and regain power from his stroke after crossing winds and current affected him near the mile. The U23 Lightweight World Champion ended up losing by open water. "It has been a good experience for him here though," said Coach Charlie Butt. Every race is a learning experience, he suggests, and Henley is a unique venue for a rowing education.

The next race down the course was the Radcliffe Women's Varsity Eight versus the Canadian Western Rowing Club in the Remenham Challenge. The Canadian crew included a Beijing Olympian in her last event of her rowing career, Sarah Bonikowsky, as well as eight up-and-comers in the Canadian heavyweight women's development program. Coached by Jeff Powell, the crew was rumored to be the Canadian U23's, although that is not the case, as most are 23-29 and more likely to bid for the Rio Olympics in 2016. Three, five and six seat rowed at American colleges (Jen Schuurman at University of Virginia, and Lisa Roman and Rosie Deboef at Washington) and they came together as a boat in early April.

"They came to camp ready--technically and physiologically ready," said Powell. Rowing Canada identifies athletes through an erg score monitoring system, and brings athletes in--these particular girls had positioned themselves well for competition, he suggests. Powell was in the launch following this race today, and he observed, "they went off the start...well should I say professionally? It was a really good start." He also felt they handled the conditions well, some bobbles but the Canadian crew pulled it together.

Eden Full, a new coxswain at Henley, felt that every time they went down the course, "I got a better sense of how to handle it." Seven seat Jen Martins was beaming when they crossed the finish line. "I was thinking that we set a few goals before the race, and we did a good job accomplishing them in rough conditions," said Martins. Four-seat Alyssa Weninger said "we got back to basics and were a wee bit better than the other boats." That was an understatement. They were winning by more than 3 lengths against a crew of equal weight but appparently not power. Their "good start" was at a 41, and they had the ability to back it down to a 29 at the end to cruise across the finish line ahead of a good American college crew.

Western Rowing Club bow-seat Bonikowsky said this is her last event as a Canadian rower, and she didn't want it to end there. Instead, she wanted to race on Canada Day, which happens to be tomorrow, final day at Henley. Here's to the unification of colonies as well as Canadian women's rowing. Their wild pre-race celebration involved playing "round the world table tennis" tournament at thier temporary place of resident. They seemed to also be intent on finding the best dinner in Henley. Cheers!

Jamie Koven is the everything-rowing-man at the Henley, and really for decades now in the US and International rowing picture. The Henley Steward, Henley Diamond Sculls and Grand Challenge Champion, Atlanta and Sydney Olympian, World Champ in the M1x and M8, World Cup and World Champion contender in several different boats, 1995 Brown University graduate and now a 39-year old father of three and private equity partner at JP Morgan Chase, dedicated the last few months trying to qualify for the Olympic team with Michael Blomquist. At this Henley, the pair are rowing The Silver Goblets and Nickalls Challenge for pairs, after both were let go from the selection camps earlier this spring. Both Blomquist and Koven were both planning to go to Henley as competitiors if they didn't make the team. Blomquist also rowed in the Penn A.C. boat in the Ladies Challenge Plate, doubling in tough conditions.

Blomquist quit his job at Morgan Stanley last February to start training to make a bid at the Olympic team. At 31, he is younger than Koven, but stepped away from his profession to train. Blomquist won here in the Ladies Challenge Plate with Harvard and lived in London for 5 years in after graduation.

In the Goblets semifinal race, the Greek pair of Christomanos and Lampridis faced the experienced Koven and Blomquist. The Greek pair held the lead down the course. 'We gave it everything we had," said Blomquist. Koven agreed, he felt they "didn't handle the conditions with the most efficiency, but the effort was there." They lost by just 2/3 length after trailing by up to 3 lengths at one point. Thier impressive last few strokes had a lot to do with the fact these men are leaving competitive rowing after this Henley. "The last 2 years have been brutal, I have to thank all my old team mates, the guys I work with and my wife and kids for helping me, said Koven, "People really wanted to see me do well," he adds.

"My hat goes off the Greg Searle, who raced about the same time as I did in the 90's and is now back on the British Olympic team," said Koven.

In a semifinal of the Grand, a match between Brown University and the National Rowing Centre for Excellence, Australia produced yet another win for the Providence, RI Varsity Men's Eight. It was a fast start and during this race, the crews were within a canvas at four of the course markers--there was not an chance to settle and take control. "The guys are good at the second half of the race," says Coach Paul Cooke. "And they do really well at recovery, we have a system but it is not really scientific," he adds. The crew of stroke Alex Fleming, Ari Resnick, Taylor Brown, Morgan Gerlak, Martin Aspholm, Slava Chupryna, Benjamin Dann and Greg Silverberg, and coxswain Lee Carroll rowed into the wind with a great deal of focus as the Aussie crew was warned for steering twice.

"All I had to do was pull hard," says six-seat Tylor Brown. "This race was less about technique and more about determination to win," he adds. This regatta is Brown's last with his namesake university.

"We didn't know what to expect from the other crew, but we had good base speed," said coxswain Lee Carroll. "I just tried to keep an eye on the point when the other crew came close to us, " she added.

In the Ladies Plate, Harvard University Varsity had a convincing lead over Molesey and Oxford Brookes throughout. The crew handled the conditions well, and at the mile, had a 4 and 1/2 length lead. Harvard racheted back their rating and settled, winning by over 2 lengths. More on this race tomorrow.