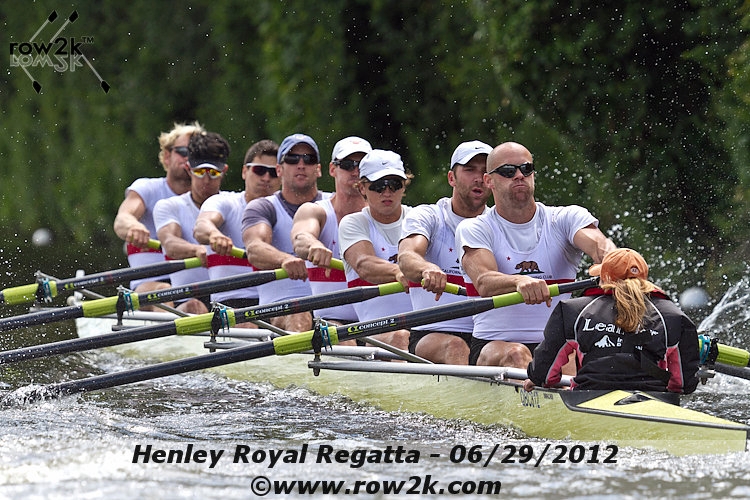 In a year without the National Team (elite) crews here at Henley, and now without a US team in the Princess Elizabeth after Gonzaga College High School's loss yesterday, the categorical measure of central tendency (if I remember grad school statistics correctly... no worries a row2k reader will correct me!) is that a high percentage of US teams here at Henley are college crews. If you further analyze the data, 60% of crews in the semifinal races today have a Harvard connection: Andrew Campbell in the Diamonds is a Harvard lightweight, there was a Harvard Four in the Prince Albert, Radcliffe Crew in the Remenham, Harvard Varsity in the Ladies and JV in the Temple - and there is Harvard grad Michael Blomquist rowing with Brown grad Jamie Koven in in the Silver Goblets and Nickalls Pairs event.

Racing started later today as contenders get knocked out of the races, a bittersweet occurrence that means that more athletes are in the enclosures wearing their blazers rather than a unisuit. There are worse fates - the enclosures are as merry as ever, despite the Olympic-year athlete profile at the 2012 Henley. Rowing is the most highly-funded amateur sport in England, so the enthusiasm is part of the sport culture. The Henley is also about the social scene, and today is when society emerges for the garden party at Henley.

To start racing for US crews today, Harvard's 2V Four competed against University of London in a semi of the Prince Albert Challenge. It was one of the closest races of the regatta, following on the heels of another close one: the Princess Grace Challenge Cup for Open Women had a bow-to-bow bout between the National Rowing Center for Excellence (Aussie U23) and the Waiariki Rowing Club (the New Zealand U23). The Aussie Crew won this one by 1/3 length, after being within a foot or a canvas for the body of the race.

The Harvard Prince Albert entry had a similar tight race throughout. Although University of London led for most of the race, it varied from a half-length, to a canvas. With Harvard keeping a rating just a couple beats lower than London, there was a chance they had a move planned. However, just past Fawley where the wind increases, Harvard remained in about the same position, and a move through the opposing boat never happened. University of London won by 1/2 length.

Three-seat Elihu Reynolds of Harvard said Coach Bill Manning predicted "this will be a long hard race." Although they did go at a lower rating, Reynolds said, "Our coxswain and stroke really judge what is best for the crews strengths and weaknesses." Reynolds, who graduated last month and is on to work for a major financial company in New York City in a week, was thrilled to be racing at Henley for Harvard. In his years at Harvard, he had only been to Henley as a spectator in 2010 when he had an internship with the Dept of Commerce at the American Embassy in London.

California Rowing Club also rowed in the morning's session on the Thames, and won against the National Rowing Centre of Excellence, Australia by two lengths. The crew of stroke Brendan Shald, Brad Bertoldo, Spencer Crowley, Ryan Monaghan, Andrew Melander, Derek Johnson, Silvan Zehnder, bow Andrew Gallagher and coxswain Alexandra Olijnyk are a composite of Cal Bears/Canadians, those who were at the Eights Camp with US Men's Eight coach Mike Teti, and who had competed at the Pairs Trials or Pan Am's. They have not practiced together long, but are a powerful squad of rowers. Two seat Silvan Zehnder is the lone lightweight, but was a contender for the lightweight Olympic straight four until the final selection.

"Our goal was to go out fast the first half to shut down the opposing crew....then row the race out..." says coxswain Olijnyk. They met their goal, going out a couple beats higher at the start, holding the higher rating to establish the lead, then settling into the course, leading by more then a length for most of the race. The acting coach of this squad is Zola Mohlomakulu from Kingston, Ontario, filling in for Berhard Stomporowski. Half of this crew has raced at Henley before with their college or high school teams, and the coxswain was at Leander for two years.

Olijnyk had been warned for steering during racing Friday against the German team, that was part due to an aggressive move to get out of the stream at the Berkshire station. She knew the Thames from her gig at Leander, and had ideas of where to go, and with no real repercussions for straying crews over Henley racing this year, she took the chance. Today's race her goal was to regulate the pace, settle nicely after the higher-rate start, and keep the guys long in the chop... no warnings from the umpire.

On to afternoon racing with Campbell in the single and Radcliffe in the Remenham opening the race card.