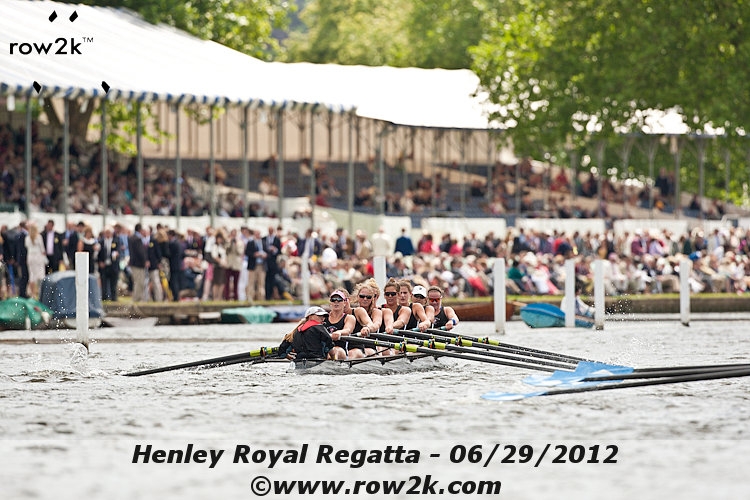 Radcliffe cox takes a big look back coming into the Enclosure

It was Eights on the the water this afternoon on the still-windy Henley course, as big rigs from Radcliffe Crew women in the Remenham, California Rowing Club in the Grand, Harvard Varsity in the Ladies, Gonzaga College High School the remaining US crew in the Princess Elizabeth, and Penn Athletic Club and Rowing Association in the Ladies faced their challengers and the conditions, still choppy and windy.

The Radcliffe Crew Remenham Cup entry won by over two lengths over Hollandia from the Netherlands to start racing after the lunch break. We haven't yet spoken to the women in this boat, more to follow on Radcliffe here at Henley.

California Rowing Club includes men who had contested for the Olympic squad, raced NSRs, the pair trials, and a couple of Cal Bears... a crew of athletes at the elite level who hadn't made it into the few seats available for the US team at London later this month, but were very familiar with winning. In their Grand Challenge contest today versus Ratzeburg Training Center, Germany, they went out fast, and had a lead from the beginning. Although CRC was warned for steering, they continued in the body of their race at a good rating, settling down past the mile when they had a two-length lead. In the end, California Rowing Club won by a length and a quarter in the Grand quarterfinal over a German crew composed of similar athletes--ones who just missed the boat for London.

In the Ladies Plate match before the Tea Interval, Harvard Varsity won comfortably over a composite Sport Imperial Boat Club and Leander Club entry. Harvard had a strong start, and was ahead by a length at the end of the island. From the shore, both Coach Harry Parker (at Rememham, about) and Coach Bill Manning (at a mile and 1/8) viewed with stroke watches, anonymously surrounded by upper-Thames revellers. "They are ready to race," said Coach Harry Parker. "These guys are well motivated, and they are rowing well and healthy," he adds.

Worth noting that Harvard is sharing some of their Aussie natives on the squad with the Australian National Center for Excellence entry in the Grand Challenge Cup (quipped a nearby photographer, "I guess they can't be the 'Center for Really Quite Good'") who are actually the U23 team. A sickness (reported second-hand to be a viral/stomach issue) has hit the young Aussie team, and Harvard frosh James Medway went from 7-seat in the Harvard Freshman Eight to a port at two-seat in the Aussie National Center for Excellence team. Harvard team mate Charles Risbey will be taking a seat in the four for the Aussies as well.

In the Princess Elizabeth, Gonzaga College High School from Washington, DC were the sole remaining US boat in the game by Friday. Before the tea interval, with his PE race starting the evening races, Coach Marc Mandel was optimistic about facing defending PE Champions Abingdon School. As a sea of supporters of the pink-clad Abingdon Crew swarmed, the two crews were preparing on the dock. There is is boy in 4-seat of the Abingdon Crew that is 16 stone, 10. To translate, that means a "big (expletive) kid" at approximately 230 pounds. The biggest rower in the Gonzaga crew is roughly 190 pounds and their tallest rower is surprisingly the coxswain Stephen Ueland, who weighs only 125 pounds.

The conditions did not favor the lighter crew. "It is going to be a tough race, we are going to throw everything we have at them," said Gonzaga coach Marc Mandel.

Abingdon School was ready, however, for Gonzaga's best effort. Abingdon was rowing from the Berks station and powerful from the beginning, with both crews within a foot due to Gonzaga's high rating through Temple Island. Once settled in to the race, however, Abingdon drew away steadily. Gonzaga, giving it their all as promised, looked like they were hit with wind at about a mile, and from a distance, you could see starboard side scrambling. Stroke Phil Bates kept the rate up to try to pull back in striking distance, but Abingdon made this PE match their own, and pulled away, winning by more than three lengths.

In the final US Eight bout of the day, Penn Athletic Club and Rowing Association faced Molesey Boat Club and Oxford Brookes University boat. The Penn AC entry is made up of a similar stone soup of US team men who are in striking distance of National team, just not in this Olympic year. The British crew won this by over two lengths. "It was a tough race in bad conditions," said Hans Struzna, stroke of the boat. He and and roommate from US training camp before the eight selection, Dan Walsh, joined a hodgepodge of athletes rowing under the Philadelphia rowing club name. A few of these men rowed in the Penn AC boat last year here at Henley, everyone else "just fell together," adds Struzna. "We made a move at about 600 or 700, it just wasn't enough to get us ahead," he explains. The team is coached by Eric Spector, but also "unofficially" by Jamie Koven. Note that makes Koven's role at the Henley trifold: steward, athlete in the Goblet and Nickalls' pair cup, and coach.

Racing for Andrew Campbell concluded earlier today, with a quarterfinal win, but I was lucky to run into Harvard Lights coach Charlie Butt, who is here with Campbell. In England, if you see "A" Campbell in a Diamonds race, the instant connection is to previous champion Alan Campbell from Tideway Scullers. Not this year, though: it is now Andrew, who is just 20.

Campbell raced against Duncan Grant from New Zealand today, a former world champion, and the one that edged Campbell off the podium at Bled World Championships last year. "He was thrilled to get that race," said Butt of Campbell's win today. Campbell had a choice after just missing qualifying for the double at the Olympic Qualifying regatta this spring, to either go to U23 trails or go to Henley. "He has heard about this his whole life," said Butt of Henley. "He does not really have so much of a strategy except sculling the boat well, not letting the distractions get him...spectators are so close here, it is a unique rowing experience," adds the Harvard lightweight coach.

On to dinner at Leander. More racing tomorrow!