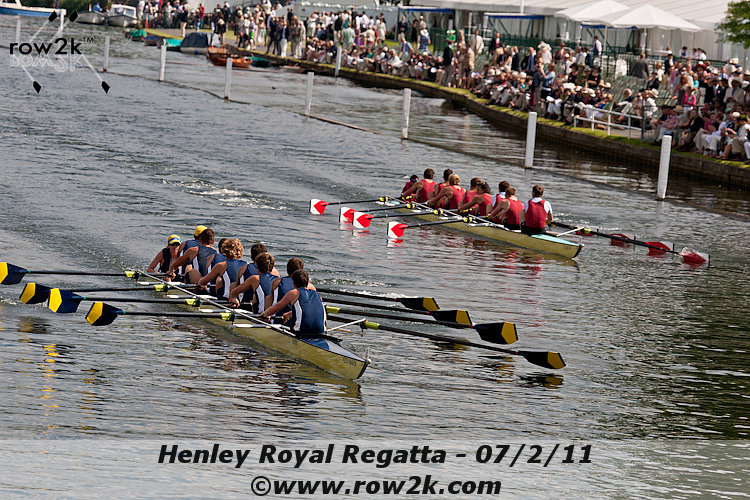 Cal emerges as last US crew in Temple, with yet another Fawley record

Another sunny, slightly breezy day with moderate temperatures for Henley Saturday. With the garden party in the Stewards hitting a peak today, the racing is also becoming the most intense. A win today means a Henley final on Sunday, and how much of a lead-in to a "back in the day" story is that? "In 2011, when I was in the finals at Henley in the Princess Elizabeth Cup...."

After another edge-of-your-seat match in the Princess Elizabeth, nine students from St. Andrews can start their stories in that manner exactly. They can also add, for emphasis, "after beating Eton College in the semis." Whew, not many can say that. Since 2005, Eton College has won the event three times and made four finals. St. Andrew's thwarted every Old Etonian's hopes for a fifth by half a length, setting up a final against Abingdon School. Abingdon, for their part, broke an 18-year-old course record by three seconds in their semi, however, so St. Andrew's final race here will not be easy, either.

"Eton is one of the best schoolboy crews, and you want to match up against the best," says Head Coach Lindsay Brown. "This is where we need to be," adds Brown. "This is a crew that benefits from the longer distances. We say we are diesel...not as fast off the line, but we've been equal or behind almost every race, you saw that yesterday," when the crew passed Hampton School in the last 200 meters, winning by just a canvas. "I think in this race they were giving everything they possibly could," Brown concluded.

St. Andrew's does not have an enormous pool of boys to pull from for their squad. Their entire student body is less than 300 students, approximately half of each gender. Then they also compete with all the spring sports for athletes. Brown, who has been at the school for 25 years, has one of his most successful crews this season, but it is still a very small group of 3-4 boats who go out on Noxontown Pond each day. Eton College, by contrast, has 1300 students and they are all boys--to say nothing of their own lake, which is big enough to hold, well, the Olympics on.

This year, the regatta instituted a new system of finish line sounds, with a clear beep sounding when the winner crosses, and a downward trending tone sounding when the losers cross. It was noted that the "losers beep" sounds like a dying bird; it seemed almost too appropriate and perhaps others thought the same thing, as we have not heard it all morning today.

If the losers beep was still active this morning, Malvern Prep would have heard it, unfortunately. They had a real scuffle this morning in a heat of the Fawley Challenge Cup against Sir William Borlase's School. They opposing crew had the lead down the course, but Malvern was threatening the entire time, and brought it within 1/2 length. Malvern was making good progress on reeling in the other crew when a bobble or perhaps steering issue in front of the Stewards checked their advance. Malvern always has fit and capable scullers, so it is quite likely that Coach Craig Hoffman will bring more crews to Henley in years to come.

Harvard and California made it, in convincing and record-setting fashion, to the part of the draw where they would have to face each other. The two have met before this year, of course, with the Cal Bears winning the battle of these two then-undefeated crews at the IRAs in the first week of June. But the crews have had time off, with Harvard switching one upperclassman into their boat, and there is always a chance that re-grouped squads can be a little different. As it turns out, both crews looked fit and ready to row after training again here in England. Yet, in their match of the Temple this morning, Cal Bears had the lead down the course, set yet more records along the way, and had the confidence of a still undefeated crew. Cal will go on to race Dutch crew A.S.R. Nereus tomorrow in the final.

Gevvie Stone will now go into her third Henley Princess Royal Challenge Cup final in as many years, but has yet to win the prize. In 2009, she faced Emma Twigg from New Zealand and, in 2010, she raced Mirka Knapkova from the Czech Republic. Stone's third trip will be a rematch with Knapkova, who, with her two Olympics and steady presence in the finals of the World Cups and World Championships in the past 8 years, has a long resume. Knapkova recently went to the states and won the Women's Gold Cup at the Aberdeen Dad Vail Regatta in Philadelphia. When these two athletes' paths converge tomorrow, perhaps Stone can play the spoiler and get started on her own resume by making the third time a charm. Stay tuned.

Doubling at the Henley seems a little bit of madness. For at least two Australian rowers, and three Americans attempting the trick, their legs must be feeling the pain of double-duty. James Chapman of Australia is one: in the Eight for the Beijing Olympics and currently the spare for the Aussie Eight, he has been training in the single and in a double with partner Jared Bidwell. Coach Noel Donaldson decided to put Chapman and Bidwell up for both events at Henley, and Chapman has made it as far as the semi-finals in the single, though he races previous Diamonds Sculls winner Alan Campbell later today. Chapman's already raced a round of the Doubles today with Bidwell, falling easily to fellow Aussies--and defending Olympic Champions--David Crayshaw and Scott Brennan. That race had a cost for Chapman, who went back to rest up for his single race later in the day. "He is just getting into again this year, that is why he is so borderline [for the eight]: is he in or is he out, so this is really good for him, we think," said Donaldson. Chapman has also been training with the Eight, he rows port or starboard. That is a versatile athlete.

Some US athletes have also either chosen or been chosen to double here at Henley. John and Thomas Graves chose to enter two events, also in the single and double, though their journeys ended sooner that Chapman's. US Women's team athlete Esther Lofgren falls into the "was chosen" category: when Erin Cafaro, bow of the Remenham Challenge entry for the US Team, experienced back spasms this morning, Lofgren was put in the Eight, for an 11:30 race. Lofgren, one of four former sweep athletes in the Princeton Training Center "B" quad in Princess Grace entry, along with Elle Logan, Kara Kohler and Caryn Davies, had a quad race against the Australian's "A" boat just three hours later. Tight turnaround to be sure, but Lofgren and both sets of boat mates came out on top.

The US squad's "A" quad did not fare so well, even without any doubling issues: Stesha Carle. Megan Kalmoe, Ali Cox and Natalie Dell did not progress in their battle with Australia's "B" boat. A credit to these four, though: the Australians's had to break the course record to beat the Americans. That result, by just a length, puts both the US and Aussie "B" quads into the final, so safe to say both squads are still somewhere in the middle of their selection at this point--and both have a lot of talent to choose from.

Will Miller and Glenn Ochal had to line up against the same double that Ochal faced last year with then partner Warren Anderson: Matt Wells and Marcus Bateman, whose 2011 already included breaking a Barrier record set by the legendary Steve Redgrave in 1982. Ochal, new partner an all, lost this round as well, but it is on to Lucerne for these boys. Lucerne figures heavily in the US selection process for the smaller boats, so that is the real goal of the trip. Coach Tim McLaren has been using Henley week as training, and this duo is out in the morning working, not paddling, with the squad.

The Chula Vista Training Center straight four in the Steward's looked, to one overheard Steward, every bit the part of an elite four. Indeed: this is the priority boat once again for McLaren's program and three of these four have been together for more than a year, so they have a tight rhythm. Guiseppe Lanzone, Brett Newlin, Charlie Cole and Scott Gault won their Stewards match against the Aussies today, and they will face the British team tomorrow in a final which should empty the seats at the Steward's Enclosure.

The rest of the US Men's squad is done after today, but not for lack of hard racing against two pretty rough draws. The quad in the Queen Mother lost to the British team in a tight 2/3 length race at the end. Stroked by Jamie Koven, the 1997 World Champion in the single, the US Quad gave little away to the British crew. The US eight faced an even steeper task: an intimate look at the defending World Champion German eight, but gave the Germans all they could handle and lost by just 1/3 of a length.

One of the most exciting races of the day was the Harvard four's Prince Albert bout with Newcastle University. Harvard trailed for most of the race, by as much as a length early on. Yet this quartet from Harvard's 2V kicked it in as they passed the Enclosures, blasting past Newcastle in the last 10 strokes. When Harvard got through, Newcastle simply collapsed, even though the race was not quite over. "We broke them," said Coach Bill Manning. "It doesn't get better than that."

Harvard's Varsity eight in the Ladies Plate did not the same final kick, losing to Leander Club later in the afternoon. Manning says Head Coach Harry Parker is following races closely from the States, checking in at all hours, even when they race early. "I heard from Harry before I knew myself," he said of one race. So now it is up to the Prince Albert entry to take home hardware for Harvard. Their race had a cost, from emptying the tanks so completely this afternoon, but Manning hopes that because Oxford Brookes University had to win from behind, too, that both finalists will be on equal grounds.

On to the Finals. 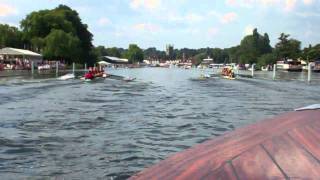 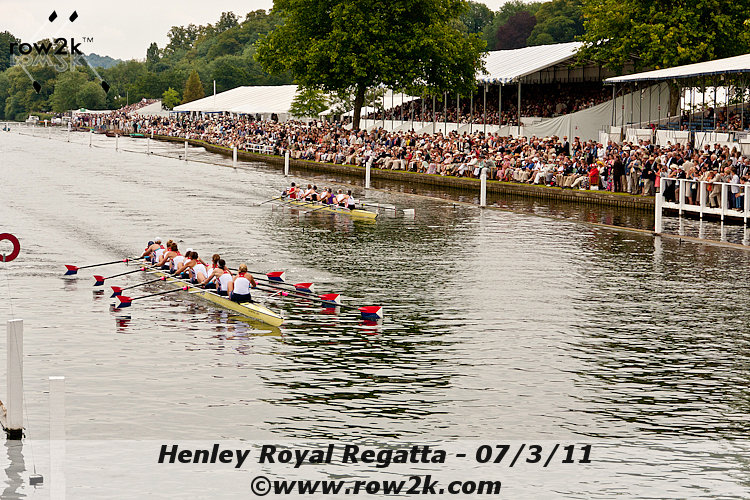 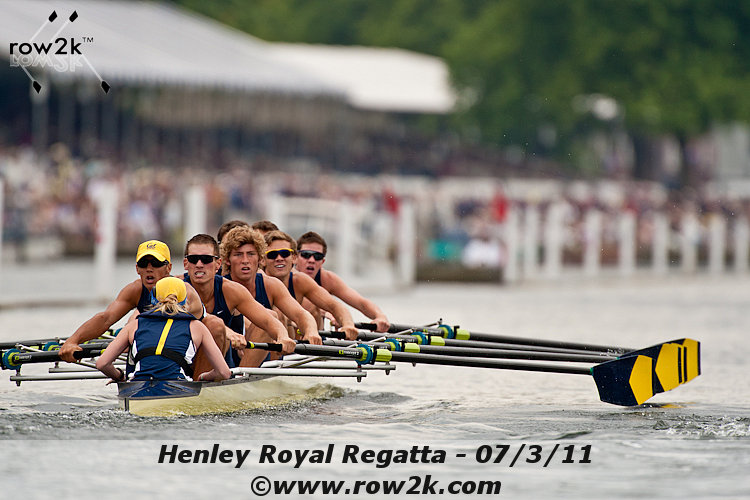 Notes from the Steward's Enclosure: Sunday 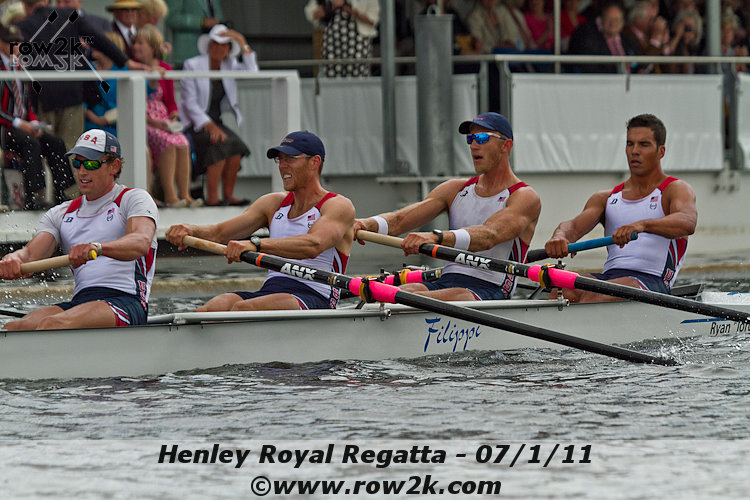 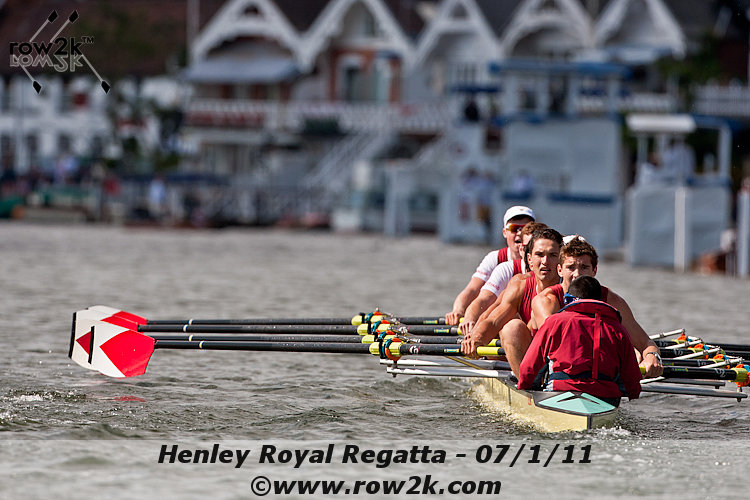