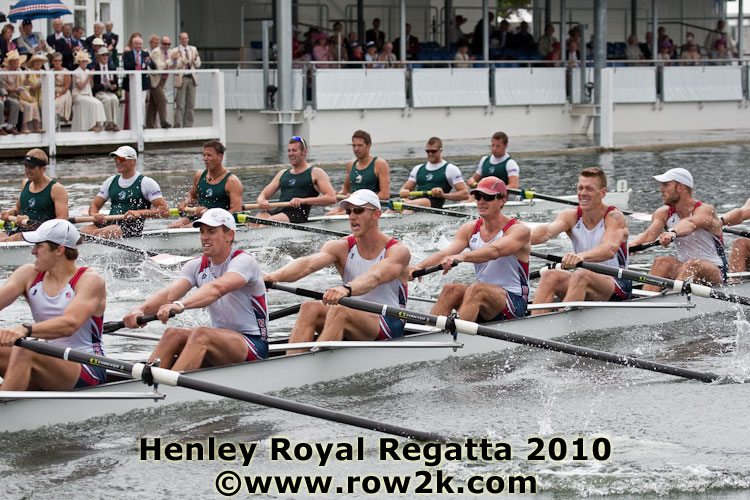 In the meritocracy of the Henley, the Grand Challenge puts the Cup in the hands of nine athletes on Sunday, with only a few very swift bouts to entertain over three days prior. With the exclusive nature of these matches and the level at which they are rowed, the enclosures are flushed out of their contents to cheer the oarsmen while "A" list coaches and supporters fill launches, scrutinizing. In the morning race between Rowing Canada Aviron (rowing as Victoria City Rowing Club and Shawnigan Lake School) and USA (rowing as Princeton Training Center), as a light drizzle and some of the quietest water of the day settled on the course, nine of Canada's best (in the world of men's eights, the anointed, as the Olympic's last victors in this category) face that of USA. Note that there was still a slight headwind during this match, but nothing these strong lads couldn't fight in nearly record time.

The horsepower in the both boats stirred up the course like it hadn't been seen yet at this Henley. The time to the barrier was just one second shy of a course record (1:44). At a start rating of 43 for both crews and both settling to about a 37, the match had Canada ahead the entirety of the course, between one length and three-quarters for most of the race, despite Canada's repeated warning by the umpires for straying (or were they seeking better water?) out of their Berks station.

"There is some work to do in terms of unity of the boat," says Peter Cookson, High Performance Director for Rowing Canada Aviron."This is a new combination, they've been rowing together for the last 10 days," he explains. "We're at a point where we are working on forming the eight for the World Championships....and we have a good nucleus.

"We have five guys back from the silver medal eight at Worlds last year, and one from the Olympic Eight (gold), Andrew Byrnes, who was three seat in the Olympics, seven-seat here," adds Cookson. He also adds that fresh-from-the-U23-team athletes Anthony Jacob and Conlin McCabe are sitting in three and four seat today after only two weeks with the team. No pressure guys!

Head Coach Mike Spracklen will be fine-tuning technique, unity, and line-ups over the summer... but until July 4, this line-up sticks and will face R.C. Hansa Dortmund, (Germany) Saturday.

The US team entry was perhaps more of a mixed bag, with the athletes doubling into the eight from the straight four, the double, and quad crews also racing at Henley: Will Miller (b), Glenn Ochal, Warren Anderson, Josh Inman, Brett Newlin, Scott Gault, Henrik Rummel, and Guiseppi Lanzone (s).

At last year's Henley, the US Princess Royal Challenge Cup entry Gevvie Stone (Cambridge B.C) had a tougher course to the final than her challenger Emma Twigg (NZL) with more races and a tad bit more hassle. That is behind her. Starting Friday in 2010 and facing Erika Bello, a lightweight from Italy who had rowed Thursday, Stone captured her first heat and moves on to race Emma Twigg, her finals foe last year, in semis Saturday.

It was Stone's first race since NSR's in Princeton in April. At the NSR she had won the final by 5 seconds, so she was in top form, the question may have been if training would fit in while in Medical School at Tufts.

"It was good to get back into racing," says Stone. "Racing one-on-one it's a mind battle...it's always another person reacting, watching for a move..."

Stone was ahead by three lengths at the 3/4 mile, but she seemed (at first) unwilling to bring it down and relax. She had watched Bello race yesterday as she came from behind at Fawley to win her heat. Mindful of Bello's consistency, she settled only when there was plenty of open water and less course to make it up.

"I'm a heavyweight, so the conditions favored me," says Stone. Although she pushed it hard for the first 1000 meters, she feels she was able to ease off the pressure enough to feel good for tomorrow, and a nice paddle past the bridge worked out all the kinks. While on a tighter schedule, Stone said she follows a condensed, once-a-day workout regimen learned from Princeton coach Lori Dauphiny; Stone was a member of Princeton's 2006 NCAA Championship Eight.

The Stone rowing legacy is well-known along the Charles boathouses in Boston, where it is common to see Gregg Stone training with Gevvie. Without going through the entire history of family Stone, one very special story that came from the 2008 Head of the Charles Regatta is that Gevvie Stone won the Championships Single, an event both her father Gregg and mother Lisa (Hanson) Stone won in 1977. With National, Olympic, and collegiate rowing experience in the family, she has a lot of support from the folks at home. (well, they aren't really home... they're in a launch on the Thames with stroke watches). On to face Twigg, who had a fairly easy go earlier in the day against a Japanese entry, so her time was slower.

In the Doubles Challenge Cup, the brothers Graves faced Cedric Berrest and Julien Bahain, the 2009 World Championship silver-medal double from France. What a draw for Peter and Thomas, who had noted earlier in the week how they really were new to International racing. Their initiation by fire this morning was a good test, and they looked in comparable company rowing against a couple of the world's best. They did not have quite enough today, rallying to pull within one and half lengths of the French double at the grandstands, but had to increase rating to the opposition's lowered rate, finishing almost 8 beats higher.

University of Washington freshmen put another "W" in the UW record books today, with a victory against a sturdy University of Victoria varsity boat. It was not an easy win for Washington, winning by two lengths but really fighting to grab that distance. Afterwards, said Coach McGee, a little erging in the boat tents got rid of any of the garbage in the muscles for these boys. Tomorrow they face Harvard, with more American fun.

Potomac BC from Washington, DC continues their run on the Thames Challenge Cup with a victory over local favorites Henley Rowing Club. Potomac had a nice lead early on, and settled into a higher rhythm in the middle of the race than races prior, but were handling it nicely with about one and a half length's lead. When the boats came into view before the grandstands, local cheering girded Henley, and they rallied to pull into the Potomac boat. PBC responded, and moved out just a bit, fighting very hard to finish 3/4 a boat length up. This one appeared to tax them a bit, let's see how they recover for tomorrow, opposition not yet determined.

Harvard progressed today in the Ladies' Challenge Plate. Winners of the 2010 Eastern Sprints, Harvard had their race from start to finish against National University of Ireland, Galway today, winning by 2 and 1/2 lengths. A little personal history here for 2-seat Anthony Locke: Locke was also in an Eton College crew that won the Prince Elizabeth Challenge Cup in 2005, so it is nice to return to this stage for him. He was the captain of the Eton crew then and just was named a captain of the Harvard crew for next year. Henley has several of these stories, hard to keep up with all of them! The race today allowed Harvard to relax a bit, tomorrow they face Imperial College London and Berliner RC.

Quick note that Malcolm Howard, single sculler for Canada (Brentwood College School) racing here at the Diamond Challenge Sculls, gold medalist at the 2008 Olympics, and Harvard alum (raced here in 2004 in the Grand, a race that is going to be re-rowed for filming here Sunday), HOCR 2007 Championships Singles winner...and more; won his heat versus an Eton College Alum Lawson.