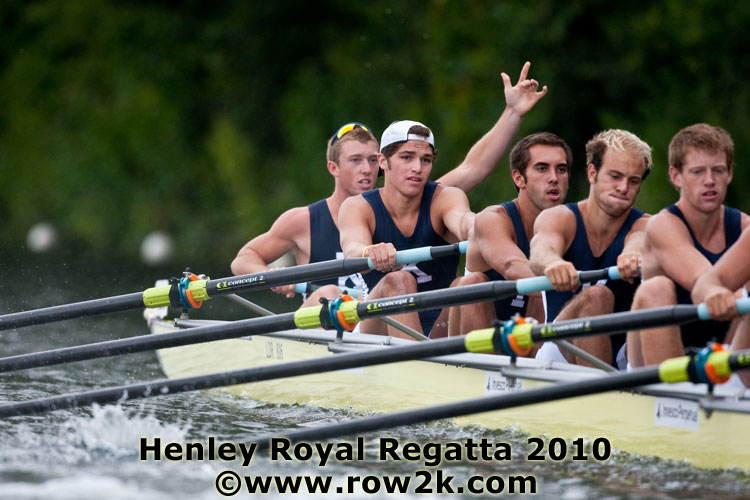 Kent bowseat raises his hand, to no avail; read on for the outcome

Racing started after tea with Boston crew Harvard taking on Exeter University Boat Club, with no rebellion but force.

From the start the Harvard frosh, coxed by David Fuller, younger brother of twins Mark and Chris Fuller from the Prince Albert four who won earlier in the day, took the start aggressively to get clear of Exeter, who never regained contact with Harvard. Exeter attempted a move at about the mile, raising their rate and power, but it was unsuccessful. Rowing at a 32 mid-course with the original 6-seat Parker Washburn back in his spot, Harvard crew looked like they had possession of the race just after Temple Island. After lowering the late to 29 and relaxing into a good rhythm, Harvard won by three lengths. Temple Challenge brethren University of Washington and University of Victoria had similar rounds, and will go into tomorrow's challenges without the pain of a hard-fought race in their legs. Harvard will face Durham University tomorrow.

If you ask a St. Joe's rower or Coach Jim Galvin what their strength as a crew is, they will say (definitively) the middle of the race. They may even following that will a slightly self-conscious admission that their start is not the best. True to form, St. Joseph's Prep started their heat of the Prince Elizabeth Challenge Cup trailing Hampton School, who was a good four beats higher. It took about a half a mile thereafter for SJP to get into the groove and move through Hampton School, keeping a nice tempo while building an expanse of open water. "We've improved on the start," said Glavin yesterday. The nice thing about having a less-than-perfect start when you expect it: the athletes don't panic. Same old same old... and on they go.

Also in the Prince Elizabeth Challenge, Salisbury School from Connecticut faced Yarm School, a small preparatory school in the UK. Salisbury had a lead as they did the day before, early. St Peter's fell "easily" on Wednesday, and Yarm School met a similar fate today. Yarm has some infamy as a crew with one of the smallest rowers in this regatta, with a Stroke weighing just 139 pounds.

Salisbury head Coach Dick Curtis is excited by what he is seeing from his team lately. They have been gaining on stateside rivals Kent School, who had won every previous match-up in during the season. At Reading Regatta, however, Salisbury won over Kent in 800 meter race, a confidence-booster for the crew. All will see tomorrow how the two crews fare over 2100 meters at Henley.

"It's my fifth of sixth time here over 30 years at Salisbury," says Curtis over his visit to Henley. He feels this is one of the stronger crews to cross the pond. "We had two great crews recently, one in 2008 when we sent a younger crew, and then we have a lot of those guys back.

"Our stern pair (Kyle Good and Emory Schoenly) were Junior National Champions over the summer and they won Canadian Henley by open water, and six-seat (Josh Weinstein) was a Junior National team member and second in the CRASH-B's this winter, so it just seemed that everything was aligning," adds Curtis.

"It's our seventh time we've raced Kent this year," each time with with a decreasing margin, but still second. 'If you want to believe in momentum then I think it's on our side, but Kent has a wonderful crew."

Salisbury had to shift rowers, as two of their athletes were too old for the Prince Elizabeth. Tim Smith and Pat Grogan stayed home and John Wambold and J.P. Ryan are in three and four seat now. The crew left for England less than two days after leaving Youth Nationals in Ohio. They had new rowers in for the first regatta in the UK, Marlow at Dorney Lake. It was in Reading when things started to come together, suggests Curtis.

Connecticut comrades Kent won their heat of the Prince Elizabeth Challenge, but ooh boy was this a different race. At the start, bow seats from both Kent and Shiplake had to straighten their boats as the wind pushed them toward the island. Two times the Umpire attempted to start, only to have a coxswain thrust a hand up and make corrections. At the start flag, bow seat of the Kent Boat, who was still in the wind-correction mode, drove hard while still slightly turned and launched himself off his seat.

"Off the first stroke of the start I fell off my seat, and it was in the bottom of the boat," says bowseat Bourke, who then raised his hand swiftly in the air to indicate a breakage (which is not even a breakage in America, and not a reason to stop a race at Henley for sure.) "It was really frightening," he admits, but somehow got that dislodged seat back on the slide. There was a great deal of confusion as some rowers stopped, stroke raised his hand briefly... it was miraculous when you saw them rowing again. Just when you were feeling a great deal of empathy for what they would face back on shore if the seat was the story of the race... there they were, all eight rowing... beautifully.

When they did start rowing again, near the end of Temple Island, Kent had only done half-pressure and a confused jumble of strokes while Shiplake had a full-tilt start that had them a good two boat lengths ahead. Kent had their work cut out for them. While a cast of supporters pedaled on the towpath, one being the Kent Coach's roommate and boatmate at Kent in the 80's, Shiplake Headmaster Greg Davies, Kent pulled themselves together with amazing composure and the resolve on stroke's face could be seen from many meters back--they were not going back to the boat tents with a tragedy as the story of the match.

Kent plowed threw Shiplake without the urgency they may have felt inside, but with poise. There rating went up, but not frantic, and by Remenham, it was clear they had it in the bag.

"To their credit, they really kept their composure," said Eric Houston, their coach.

As mentioned, the Connecticut Yankees will match up tomorrow on Prince Elizabeth's court.

With the PE crews shaking down, single scullers hit the water for the first time today. Among them, lightweight rower and volunteer coach Tom Paulette from Princeton, who earned his spot in the Henley Diamond Sculls when Marcel Hacker withdrew and he was the top qualifier. In the last race of the day, Paulette played the waiting game for two days while his Tigers friends were knocked out of the Prince Albert leaving almost two full days of inertia. Paulette is new to this sculling sport (after being a lightweight sweep rower at Princeton for four years), so it was a bonus for him to be in the race.

He had a great start and was ahead through Fawley meadows, but it was close. For the body of the race, Paulette and London Rowing Club's deKeizer were at the same rate and well-matched. The wind picked up near the grandstands, and it seemed to affect the lighter Paulette more. As the boats moved past the grandstands, deKeizer found his rhythm and power and Paulette just couldn't match it.

The Yale entry in the Prince Albert Challenge had one of the toughest races of the day. Rowing directly with Newcastle University almost the entire race, they remained within a few feet of their bowball, but just couldn't pass it. The crews were well matched, but it came down to the grandstands and Newcastle had some untapped power. In the end, Newcastle won by a length and a half, ending Yale's run in Henley 2010.