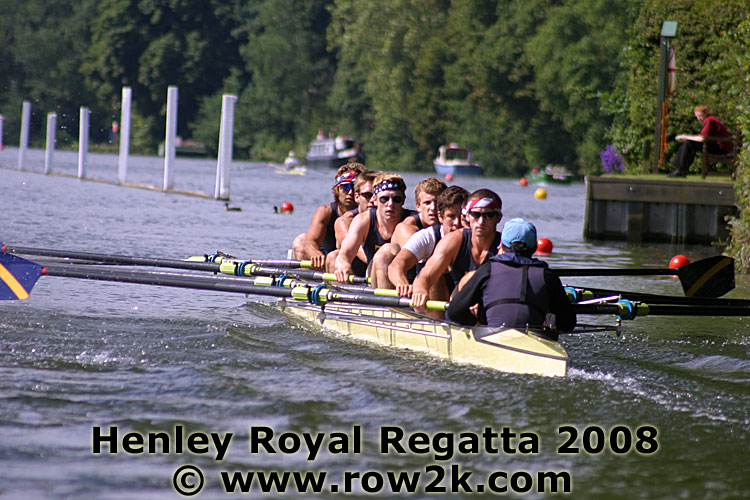 Glancing at the race report from the officials at the Henley is like reading Wordsworth, written rapidly and on a launch. The poetry is stunning, and on the fly. Harvard yesterday was said to go on to "win as they wished." They did indeed. Some of the most compelling notes on the report, however, relate to the wind and water conditions as compared to the time down the course. Yesterday, both varied considerably.

Today as the sun shines on Henley-on-Thames the wind, as they say in the report, is "nil." If you really want to get complicated, you can talk about the nuances of racing from Buckinghamshire station versus Berkshire Station. I believe a book is being scribed about this now in the Stewards Enclosure. Here's the abstract of the book: historically, Buckinghamshire has the bad reputation of currents, etc--all the lot of things that disturb oars and boats. If you win from Buckinghamshire station, to put it in the lingo, is "brilliant." But there is that section where Berkshire side is undesirable too, right? The good side is the winning side after each race.

Side note on this: Cornell has rowed from Buckinghamshire Station the entire event, and (if memory serves) all but one of their races last year. More on Cornell Light/Stanford Freshman Heavyweight match-up later.

Friday started 30 minutes early and Malvern Prep School from Philadelphia started it strongly with a win in the Fawley Challenge for junior quads. Starting at 38 strokes per minute, Malvern powered ahead of the Grange School right away. By Remenham, Malvern was two lengths ahead of The Grange School and settled to a 33. As they saw the distance between the boats, they settled to a 30 and rowed the race out.

In the double sculls, Gabriel Winkler and Donny Simkin won by almost two lengths, cruising in at a 27 over a crew from London Rowing Club. Winkler, a former NYAC rower, and Simkin from Stanford are part of the California Rowing Club group that is making a mark on the Thames this week.

Riverside Boat Club's (Boston) quad won over a Reading University Crew. These guys are still a mystery to the row2k reporter; stop by the Press Tent if you are reading this.

The Temple races were perhaps the most difficult for rowing fans in the United States. There are three US match-ups in the Temple today, three crews eliminated. The first down the course was Trinity versus Grand Valley State University. Trinity is coming off a successful season where they won the College 8 at the Head of the Charles Regatta and the ECACs in the Varsity 8s.

Trinity Coach Larry Gluckman had polled the crew in September about their availability for Henley 2008, and kept this race on his mind throughout the year, looking out on the racing horizon, but winning before it came into to full focus. This kind of planning is the bailiwick of this legendary coach, who has been to Henley with four crews: Northeastern, Dartmouth, Princeton and Trinity. His Princeton crew was in the final of the Grand, and a Trinity crew won the Temple in 2005.

The regular season for Trinity ended May 11, and they started a camp May 14 to sort out who was going to Henley as two members of the spring racing 8 were ineligible. (One was a U23 team member, one had rowed the event in 2005. Rules are firm on this: no International competitors or former Temple racers in this event).

"We had a pool of athlete to choose from," says Larry Gluckman. One of the athletes, incidentally, is the brother of Doubles rowers Thomas and Peters Graves, who were runners-up in the National Selection Regattas and former Trinity rowers for Gluckman. John Graves was a 2V rower who moved into 7 seat.

But to the race: Trinity won this one. Grand Valley had a strong race, but was remained behind until the enclosures. They made a strong push, but perhaps too late for a team like Trinity that you just can't walk through.

In non-Temple news, Trinity's straight four lost to a very effective crew from Imperial College and Kingston Rowing Club, but did so rowing very well.

US Temple battle, part 2: Harvard Freshman faced Williams College, who had earned a fourth in the Final at ECACs won by Trinity. Despite a valiant effort by Williams, Harvard had control of this race start to finish though, the three-quarter length win was done relatively comfortably. The boys will have legs in full recovery tomorrow.

In the Double Sculls race, Thomas and Peter Graves from Bantam Rowing Club won by four lengths over their Dutch collegiate opposition. California Rowing Club's Wes Piermarini and Eliot Hovey also advanced easily, rowing in to the finish at about a 22 and more than four lengths ahead. These 25-year recent college grads are representing the United States in Beijing, and are using Henley to gain some International racing experience as both have, well, none.

This is the case of a seriously fast-tracked pair of athletes. Coached by Tim McClaren, formerly an Australian National team coach and currently at the helm of California Rowing Club, Piermarini and Hovey started at the club September of 2007 (Wes) and Winter of 2006 (Eliot). Hovey basically walked 'next door' to the club from his Cal Berkeley boathouse and was one of McClaren's first athletes at the club, which really didn't get its start until October 2006. Their goal was originally the 2012 Olympics.

"I bought penny stock and it's going up quickly," said Hovey, who feels he was in the right place in the right time.

The pair is training through this event, keeping the volume up all week and their eyes on the Olympics--they leave in three weeks.

Onward to more Temple and Prince Elizabeth results in the afternoon.