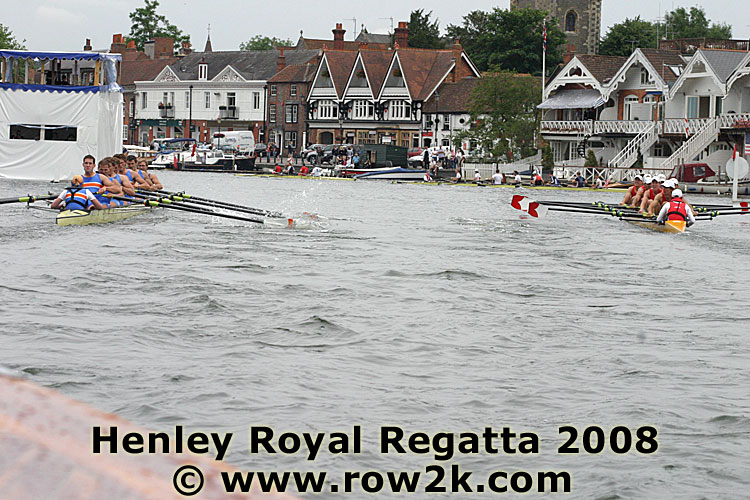 Afternoon Report:
The first heats of the high-entry events are taking up much of the day here at Henley-on-Thames, with Temple, Thames, Prince Elizabeth and Wyfold Challenge being contended at almost every pass by the enclosures. Each race has 32 entries; many crews are saying good-bye today.

One that isn't - they raced too late to make the morning report - is Grand Valley State University. The Michigan-based collegiate club program won the Point Championship at the American College Rowing Association Regatta in Oklahoma this spring, and was second place in points at the Dad Vail Regatta in Philadelphia. At Henley, they won by at least three lengths to start their week on the Thames. Good start for Coach John Bancheri.

So the big boats moved down the water, which is nice compared to last year's water, with just some rolling water by the Steward's enclosure-nothing to break a crew. Last year's strong current and high water kept the progress boards closed and the customary winning-crew paddle under the bridge a no-no. This year, save a quick shower in the afternoon, the weather is cooperating.

In afternoon racing, Harvard Freshman won their round of the Temple Cup by two lengths over Trinity College, Dublin. With so many American crews in the Temple, there is bound to be a US match-up, perhaps as soon as tomorrow.

Salisbury School from Connecticut, continuing the "in your face" tone set by another US scholastic crew, won by the margin that subtlety declares wide-open water: "easily." If you do not speak Henley, that is more than four lengths. They will be a contender in the Price Elizabeth Challenge in days to come.

One of the remaining Connecticut crews, and the only other crew from the US to end their Henley racing today, was the Trinity coxed four in the Prince Albert Challenge Cup.

Today 80 boats went to 40. Some of the small boat races start tomorrow, with first heats of the Men's Diamond Challenge for singles, as well as the Double Sculls Challenge and the Silver Goblets and Nickall's for pairs.

Newport Aquatic Center, outweighed by '2 stone' and in the Buckinghamshire Station, lost by a canvas to Grosevnor Rowing Club, after leading by as much as a half length at the barrier in the first round of the Thames Cup. This young crew had been the spoilers in similar fashion to St. Joseph's at Youth Nationals, talk about a reversal of fortune. Now they have a week in Henley thinking about a one-meter loss over a 2112-meter race, ouch.

But the good news is that the other familiar crews continued their success from spring season stateside. Williams, who returned to Onota Lake with a fourth at the ECAC championships May 10 at Worcester, won by more than a length over Oxford Brookes University.

The next race down the course was St. Joseph's Prep School versus Cheltenham College in a Prince Elizabeth Challenge. Either St. Joe's was still flying high from its win at Stotesbury Cup, or perhaps smarting from a painful loss by inches to Newport Aquatic Club at the Youth Nationals, but they keep some water between them and their opposition, just to be sure. They looked comfortable, rowing at a lower rating, and won "easily." The rowing of this crew could be compared to that of Brentwood College Crew from Canada last year, who made it to the finals. There is a lot of talent in the boat, and according to Coach Bill Lamb, the St. Joe's program as a whole is enjoying their best year since 1997.

Trinity College, here with several entries that keep Larry Gluckman in the boat tent all day, won their race by a little over a length in the first round of the Temple Challenge Cup. We'll be hearing more from Trinity crews (and Coach) as the week progresses.

On that note, a little segue to the Women's Varsity 8 from Trinity, who won at the Women's Henley just last week and were probably feeling pretty good about their chances at this Regatta. But a chat with Wesley Ng, coach of the team, or perhaps 5-seat, would reveal the reality: they are not racing this week. This unwilling 9-gal-trinity-cheering-team had equipment breakage in the first 200 meters of the Qualifying races, and the engine room sputtered. No Henley.

Cornell University lightweights were here again this year after a final berth last year and just about every major victory in the States this spring. The Sprints and IRA victors took last month to bulk up a bit, hit the weights and prepare for another year of racing. Only two on this crew had Henley experience, but they looked poised and fit lined up against the Dutch Crew, D.S.R Proteus-Eretes for the first round of the Temple Challenge Cup. The crew from Holland had those two stones of extra weight, mind you, but the weight did not serve them--their fitness was not a match for the Cornell crew. Cornell had to fight off their oppositions drive past the enclosures, but did so successfully, winning by a little less than a length.

In the launch ride following the Cornell-Holland crew race, the two coaches exchanged compliments and pleasantries about boats, races, and personnel.

Said Cornell Coach Todd Kennett: "It is hard to find information on your crew."

Hale did find video of Cornell from the Sprints, and was duly impressed. The prediction down to the race start of all in the launch (which also held Chris Wilson, one of Kennett's former coaches) was that this match-up was like a final--after all, it was heard that the Dutch crew had beaten their own country's U23 team recently. With that bit of information, it could be predicted that Cornell could have some easier races ahead of them.

Stanford University had a 4-length victory over University of Stellenbosch, South Africa in another Temple bout. The scale on this one tipped in the favor of Stanford, a hefty two-plus stone (roughly 25 pounds) over the South Africans. At the close of the race, Stanford was cruising comfortably at a 32, their opposition in the Buckinghamshire station were scrambling at a 37, but not making significant progress.

Back in a bit for the afternoon report!