The Rabbit purchases a Pimm's

Hot day at Henley! Over 30 degrees C. Still, the Stewards kept every gentleman’s top button buttoned, tie tied, and jacket on. This, I am sure, is a strategy to sell more drinks. It worked today, as the Pimm’s taps ran wide open, and the Fawley Bar waiters with their portable credit card machines moved a lot of money for a lot of booze. Seemed like a fair exchange for all concerned.

Hot described much of the racing too. A little cross tail combined with flat out fast boats produced the best times of the Regatta. The US women, racing as the Princeton Training Center, lowered the Remenham Cup record by a whopping 12 seconds.

The PE Cup racing was stellar, with St. Ignatius and The King’s School Chester earning their finals spots by fighting off uberly determined Shrewsbury and Andover respectively. St. Ignatius looked especially strong, as they have all week. Observers questioned their ability to sustain their powerful rowing under pressure and over time. So far they have proven themselves capable.

Nineteen finals will be contested tomorrow. The US will be represented in five events: Princeton 1V men in the Ladies Plate, Cornell 1V lightweight men in the Temple, the aforementioned St. Ignatius in the PE and Princeton Training Center in the Remenham Cup, and Paul Daniels, ex-Wisconsin, in the bow of the Oxford men's pair with Canadian B.H. Williams. There may be more yanks in the mix of whom I am unaware.

Saturday at Henley always brings out a huge, boisterous crowd in the Enclosures, and an even larger, unabashedly boisterous crowd along the course, with more people afloat in boats of all sorts. The party usually peaks in midafternoon, yet at that time today there was a noticeable thinning of the crowd. Why? England was playing Portugal in the World Cup. Yes, rowing is a big deal here, but nothing compares to World Cup football. And although the sun was shining, there was a palpable cloud of depression over the town when England went down 3 ­1 in a shootout.

During one of the breaks in the action, can't remember if it was luncheon or tea, a twelve-oared shell went up then down the course. Had a decent crew in it too. Seemed to be moving fast.

All is over at Henley save for the finals. Even the traditional fireworks are done. Tomorrow’s results will determine whether this is my last correspondence. If so, I thank row2k for the chance to write about this unique event, I congratulate all the competitors who took their best shots on the Thames, and I apologize to all the great stories out there that I missed. 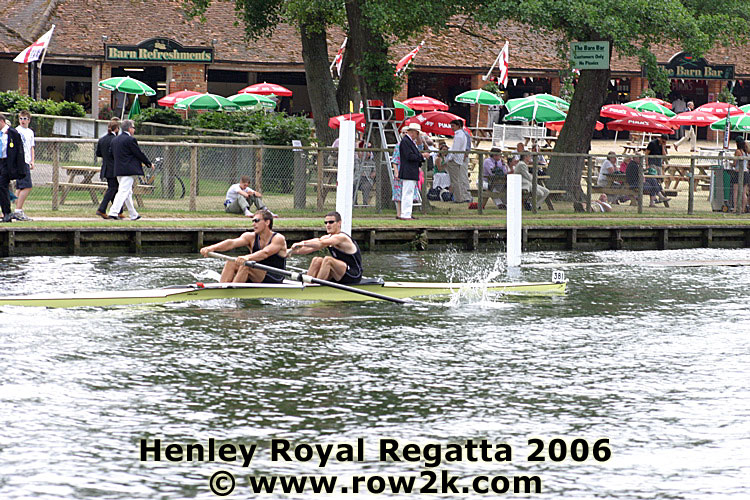