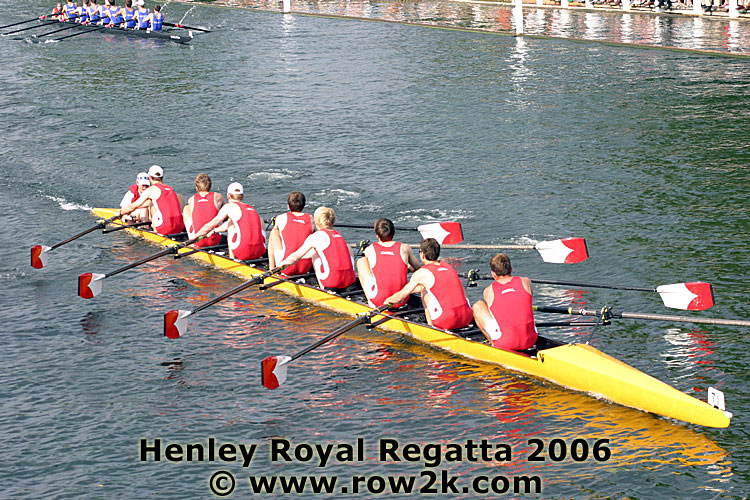 Cornell Lights reach for the line

I have been on a short walkabout of the terrain. Hey, one's gotta take advantage of one's badges!

10:20 [Goblets] N.J.G. Wyatt & N.V. Pickford - S.F. Pearson & D.A. Wyper
That's Cygnet vs. Goldie. Goldie already 2.5 lengths up at the Barrier. Not as close as the first Goblets race of the day between Plymouth and Triton (NED), where Plymouth only pipped in front 80 yards from the line and Triton probably lost it because of some erratic steering. Goldie crosses the line, easily wins it.

10:30 [Temple] University of Birmingham - Trinity College, Dublin, IRL
Trinity leads from the start but it's fairly close, one length nearing the line in front of the grandstand. Yes, the striped squad looks and is the better crew.

10:40 [Wyfold] Thames R.C. 'A' - London R.C. 'C'
Thames knows that an A boat must beat a C boat, or the club is in big trouble. They are indeed the better oarsmen and can drop the rate to 27 while maintaining a 5 length lead on the line. Easily.

10:45 [Goblets] P.M. Lock & R.G. Davies - N.D.V. Henderson & R.B. Morgan
Lymington Amateur vs. Harvard. Time 2min20 at the Barrier for Harvard 2 lengths up. A bit further along Harvard have a comfortable lead of almost 5 lengths. Both rating 33. Harvard have no trouble rowing neat and straight down the course. Lymington are a bit shaky and don't pose any threat. Easily it is.

10:50 [D Sculls] P.J. Goodchild & F.T. Raschke - R.A. Hosking & P.A Hone
2:14 to the Barrier for Walton in front of Auriol Kensington. Several lengths between them, it's early rounds for the double sculls. AK are not the athletes Walton are.

11:00 [Thames] Vesta R.C. - Reading R.C.
Finally a race under 2min at the barrier, Vesta leads by one length. Reading hugs the booms and perhaps that's not the best strategy. A win by almost 2 lengths for Vesta. Looking by their faces while they drift past the press box, Youth beat "experience".

11:10 [M Quads] Mercantile R.C., AUS - City of Oxford R.C.
It's a race but no nail biter. Mercantile didn't travel around the globe to be knocked out in the first round. Less than 2 lengths on the line and Mercantile wins.

11:15 [PA] University of Bristol - Imperial College, London
Imperial have no difficulty with Bristol.

11:20 [Diamonds] W.P.J. Hoodless - A.R. Ardron
Upper Thames vs. London RC. Hoodless leading by a length on the mile. His catch is much quicker and at the same time he's longer too. Wins it by almost 4 lengths in 8min18.

11:30 [PE] Thomas Jefferson H.S., USA - Emanuel School
Rating 43 and 41 at the end of the island, TJeff in the lead. 1:57 at the Barrier, more than 2 lengths in it. 3min19 to Fawley, 4 lengths. No problems at all for TJeff. They did work hard, it seems. Verdict easily does not reflect what they put into it. They may work on keeping the blades full covered, quite a lot of water thrown on their backs. On the other hand, that's refreshing on a warm day like this.

11:35 [M Quads] Rob Roy B.C. - The Tideway Scullers' School
Alternating leaders in this race, great stuff. Not too fast though, 2:01 to the Barrier. Tideway takes it by less than a length. Remarkable is that both crews tended towards portside of the course, Berks station. More often it's to the other side.

11:40 [Wyfold] Burway R.C. - London R.C. 'A'
Good rowing and a good race London by over a length and it's probably their power that makes the difference. Burway' technique is up to spec. London bowman is wearing an enclosure badge it seems, that's flapping in the wind. How annoying, I can't believe he's prepared to put up with it.

11:45 [Fawley] The Windsor Boys' School 'B' - Hereford Cathedral School
Hereford have a while to grow bigger and wider like Windsor. Typical difference between crews that you might see in the junior categories. No real contest and Windsor are happy to show it off behind the finish line, strokes with a lot of contrast.

11:50 [D Sculls] M.N. Sharpe & M.G.W. Baker - A.M. Larkman & M.P Plotkowiak
Marlow against Bristol. Bristols win by 2 lengths but bow is shaking his head, clearly not happy with the race. All four of them are silently paddling away. Guys, the sun is shining and you are either through to the next round or free to drink champagne on the lawn! Seems like a win-win situation to me.

12:00 [Temple] Oxford Brookes University 'B' - Univ California, Berkeley, USA
A faster race, 1min54 to the Barrier with 1 length lead for Berkeley who are also rating lower. Looks promising for the Americans. Fawley time 3min11, 2 lengths up. At Remenham club, it's 33 vs. 36, 3 lengths and a done deal. Oxford Brookes are gracious hosts in England and "let" UCB come through first.

12:05 [Visitors] Galway RC & Skibbereen RC, IRL - A.S.R. Nereus, NED
Time 3min23 at Fawley, 1 length lead for the Dutch Visitors. Halfway Nereus is warned for coming too close over to Berks but they do have 1.5 length lead. A bit on they clearly suffered from steering back because the lead is down to 1 length. They are finding their rhythm back and quickly re-establish a safer 1.5 to 2 lengths. A win for Nereus.

12:15 [PA] Reading University 'A' - Goldie B.C.
A tight race, half a length for Goldie at Fawley. After that, Goldie drops the rate a little while to 32, Reading ups it to 34, 35, but still Goldie increases the lead slowly but steadily. A full race to the end, 2/3s of a length on the line.

Several women's eights are training now in the luncheon interval. They're starting tomorrow and it's looking like a good field. I'll go take a look halfway down the course, see if I can spot the ladies doing a sprint or two. Later!

Welcome back. Lunch was uncomplicated but nourishing. All in all very civilized (it's a buzz word I have to use just once).

2:00 [Temple] A.S.R. Nereus, NED - Univ. of West of England 'B'
Nereus are a crew of second and third year student rowers from Amsterdam. They steadily increase their lead on the B crew from West of England. That was to be expected from a club that a few years ago won the Temple Challenge.

2:05 [M Quads] Northwich R.C. - Henley R.C. & Tideway Scullers
Henley is much better than Northwich and leads right away. Dropping the rate a little allows Northwich to pull back to almost 3 lengths.

2:10 [Wyfold] Leander Club - Quintin B.C.
Leander have no trouble at all keeping ahead of Quintin.

2:20 [Diamonds] T.H. Graves - S.L Davies
Another heat of the prestigious event. Graves of Bantam BC beats Davies from Mercantile, AUS. Good matched race and Graves will have to be quicker, I think, to survive another round.

2:30 [PE] Canford School - St Ignatius College Prep., USA
St Ignatius beats Canford easily. They did row hard until the line, very strange. Save yourselves for the next few days, kids!

2:35 [Temple] University of Bristol - D.S.R. Proteus-Eretes, NED
Exciting race, Bristol has the early lead but Proteus overtakes them on the mile. It's a length on the line. Delft rows solid and has the stamina.

2:40 [Visitors] Shannon R.C., IRL - Crabtree B.C. & Bosporos B.C.
Old Blues never die? But they do get beat by the Irish. Both the Smith and the Livingston brothers, each couple one from Oxford the other Cambridge, rowed against each other in the Boat Race and are now forming a Visitors' crew together. It's a nice gimmick but perhaps their busiest training days are over; they lose to Shannon who look strong.

2:45 [Fawley] Reading R.C & Evesham R.C. - The Tideway Scullers' School
Tideway looked like they had it under control until Reading put in the ultimate effort. Half a length and a good race.

2:50 [Diamonds] C.J. Thomas - J.L. Aguirre Barco
Thomas from Nottingham had the early lead but Aguirre from Seville overtakes him near Fawley. At the mile he has 3 lengths and it looks like the race is over. He's controlling now, and letting Thomas close to about 2 lengths. No need to overly exert yourself. Smart.

3:00 [Ladies] Univ. of S. California, USA - Harvard University, USA
USC against Harvard! Harvard takes half a length at the quarter mile, rating 37. Barrier time 1min47, that's fast. Harvard leads by a length and underrating USC's 36 by 2. Fawley, 3min16, 2.5 lengths. Some sloppy bladework by USC. Harvard wins by 3 lengths, how will they fare in the next round against Stanford? Word on the lawn is Stanford will take it and face Princeton!

3:15 [PA] Kent School, USA - Durham University
Durham is a fast crew and Kent USA shouldn't be ashamed to have lost to them. Durham led right away from the start but Kent kept racing. Boat speed over the distance almost the same and Durham wins by not more than 3/4s of a length.

3:20 [Diamonds] G.J. van der Linden - G.W. Frase
Van der Linden is a lightweight rower (and now sculler) who missed the bronze medal in the lightweight four in Athens by 0.05 seconds. Today he's playing with Frase from UC Berkeley, countering his every move. Not more than 1.5 lengths on the line but it looked like Van der Linden could well do better. If he wins his quarter of the draw he's probably up against Charlie Palmer from Cambridge.

3:30 [Thames] Agecroft R.C. - Neptune R.C., IRL
A very tight race. In the last quarter of the race Agecroft pulls away and wins by a length. Neptune remain immobile for quite a few minutes. Strange groans from little green men on my left.

3:40 [Visitors] London R.C. 'A' - Porcellian Club, USA
London struggled with steering in the early stages then straightened out and won by a comfortable margin of over 4 lengths. Porcellian were very gracious in defeat and recognized London's supremacy immediately after finishing with a warm cheer.

3:45 [Fawley] Cincinnati Country, USA - Scotch College, AUS
Cincinnati wins but they had to work hard. They need better steering and perhaps a lower rating that still works. They did it now, rushing to the line, but it took a bite out of them.

3:50 [D Sculls] N.H Simonsen & M.G Adamsen - F. Dufour & F. Moreau
The Norwegians came 7th in the A-final of the Athens Olympics. That's right, 7th on a 6 lane course! Let's see if they will come 3rd today in a 2-up sprint. No, the Olympic class heavyweights win it from the Olympic class lightweights from France (Dufour won a silver in Athens with Touron).

Dear readers, all this typing has made me thirsty. Party boats to the left of me, Stewards' Enclosure to the right of me. I'm no light brigade but I am going to charge something. A tearoom probably. Cheers!