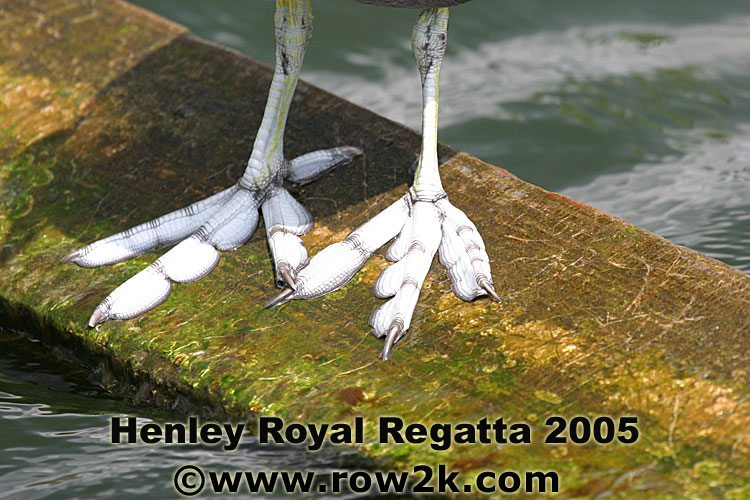 It was a classic Henley day: partly sunny, mild weather, gentle breeze, with river and shore packed with characters of all sorts. Beautiful slipper launches, punts, and skiffs plied the Thames. The enclosures were crowded, more so than I remember for a Wednesday. Crazy hats abounded. Pimms and beer flowed freely, so long as glassware remained behind the freshly painted picket fence.

Wednesday racing is not often exciting, as selected crews meet up with those not so fortunate, and most margins are large. By the time crews pass the enclosures they are either cruising or toast. The exhausted ones struggle by with near negative spacing, and clear anguish on the rower’s faces. Some are acting, but most are in true pain, and worthy of the polite applause given for their effort.

The best cheering of the day was for the Temple Cup race between Jesus College Cambridge and Glasgow University. This was a close race, with Jesus slightly ahead. The crowd, partial to the English crew, shouted “C’mon Jesus! Jesus! Jesus! C’mon Jesus!” That outcry made my to-remain-nameless green-jacketed companion from Louisiana exclaim “Sounds like a Southern Baptist church on a Sunday!”

More overheard coaching advice from the towpath: “Don’t take the water before the catch!” Not sure what that means, but the crew in question was eliminated easily today, so perhaps their blade work issues still need work.

Best vendor support at a regatta: the C-2 trailer offers free oar repair, but their best service is a compressed air hose set up with pressure valve for coaches to fill bike tires.

Best seating at any regatta: the reclining canvas chairs placed alongside the river inside the Stewards Enclosure. Look closely at any Henley picture, and I wager that at least one-third of the occupants of these chairs are sleeping.

Most diligent worker/best reward for effort made: this award goes not to a rower or regatta worker, but to a coot. The Thames is full of these duck-like water birds. One decided to build a nest of sticks on the log boom across from the Steward’s Enclosure. He, or she, I can’t tell, swam about, delivering and assembling sticks on said boom. Every five minutes a race would pass, and the wake from the umpire’s launch would wash the nest away. The coot moved quickly to reassemble, only to have the sticks return to the Thames on the next swell. Again, and again, and again. Adding to the bird’s trouble was a slipper launch that moored itself on the boom right where the coot was still trying to make a home. The coot then began to bite and tug on the launch’s mooring line, an action as futile as nest building. We on shore were feeling badly for the bird, when his/her amorous mate swam over, and without a nest, took steps to preserve the continuation of the Thames’ coot population. A happy day in the end, I suppose.

Best display of good rowing: not from any crew in the competition, although there were some very good boats racing today, but from an elderly man pulling along a heavy skiff early in the morning before racing began. He was fluid, patient with his power, efficient in motion, and had an easy feel for the water. He, his boat, and the water were one. I’m sure his skills come from years on the Thames - and I hate to use this overdone cliché, but it fits ¬ simply messing about in boats.