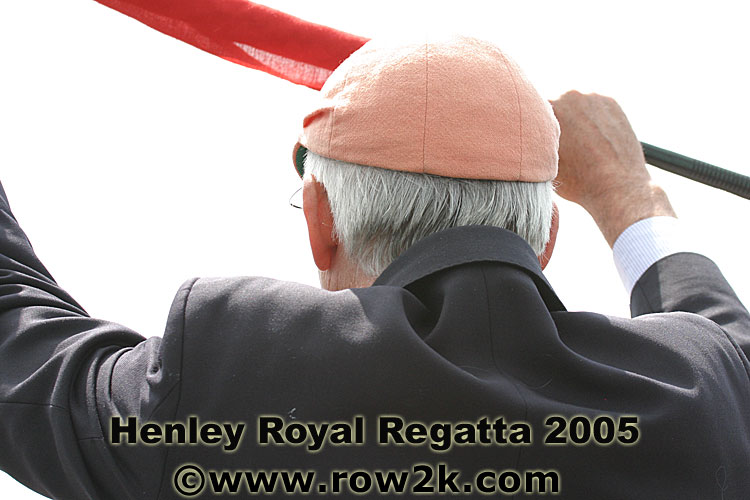 Racing starts tomorrow. The boat tent is nearly full, the course is crowded with crews throughout the day, and pre-race anxiety, tension, nerves, apprehension, excitement, whatever the descriptor, is apparent. Courtesy is tested as conflicts arise among this crowd of competitive people. The Thames course is challenge enough to row when a crew is alone; add a few hundred boats along with the normal river traffic, and we shoreside spectators have instant entertainment. Yesterday's most entertaining moment: Crew A, accompanied by Coach A on the towpath, row onto the course at a paddle pace. Crew B wait at the start for a large gap to form between them and Crew A. Crew B begins a full-course training piece at pressure, followed by Coach B on bicycle. Regatta rules give the right-of-way to the faster crew, or those doing the overtaking, not the overtaken. Coach and Crew A, not aware of said rule, decide to stop for a while mid-course. Crew B quickly advances upon them. Crew A refuses to move out of the way. Crew B slams on the brakes and aborts their piece. Coach A yells at Coach B that Crew B's actions are "hostile." Coach B remarks, angrily, "The gentlemanly thing to do would be to let us pass, but clearly you are no gentleman!" Yeah! Let the racing begin!

To avoid the congestion, the Cornell crew went upstream this morning, through the locks towards Shiplake. They were rewarded with a quiet row on a calm river. Views of pastures, cows, swans, riverside estates, flower bedecked canal boats, and well-kept locks illustrated why this stretch of the Thames is so beautiful and so special to row upon. Yet conflict did not avoid us: we were scolded for leaving a lock's gate open. Our apologies to the lock-keeper brought back good cheer, and we will not make that mistake again.

Back at the course, folks are painting oars and washing boats, nothing new there. What are new, and not well received, are two significant changes: The town has installed a series of stop lights in a "traffic calming and congestion reducing" effort - an effort that appears to cause nothing but traffic back-up. And the monstrous sunflower style shower heads on the infamous Henley boat tent cold showers are gone. The cold showers remain, but through little stock heads.

Another rowing coach towpath admonition to his crew: "Breathe, breathe, distribute the oxygen!" OK, I guess that would be helpful.