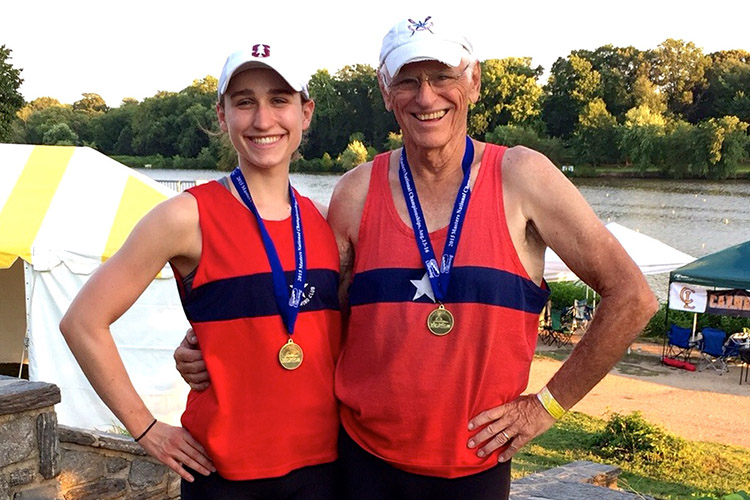 Hirshorn and Grandpa at Masters Nationals
In the weeks leading up to our grandfather/granddaughter race at Masters Nationals, my grandfather lent me his copy of The Boys in the Boat by Daniel James Brown. I devoured the gripping account of the University of Washington’s men’s Varsity 8 that won a gold medal at the 1936 Olympics in Berlin, Germany. After turning the last page, I noticed a photocopied picture, tucked inside the back cover of the book, of a plaque with George Pocock’s famous quotation:

"It's a great art, is rowing. It's the finest art there is. It's a symphony of motion. And when you're rowing well, Why it's nearing perfection-- And when you reach perfection You're touching the divine. It touches the you of you's which is your soul."

A little over a year before I saw the exact plaque in the California Berkeley boat house during my freshman year at Stanford. That first year on the lightweight rowing team was challenging. I never felt more inefficient on the water. Despite my efforts, my stroke lacked artistry; I floundered; I hacked. Seat racing made it obvious that I was not moving the boat, and I did not even qualify to be the alternate for nationals.

The plaque also reminded me of my grandfather because his hobby was hand-carving wooden plaques on which to mount and preserve the countless wedding invitations he and my grandmother received—he would then give his creation as a wedding gift to the bride and groom for a treasured memento of their special day. The plaque of my parents’ wedding invitation hangs in our living room. My grandfather’s commitment to rowing is commendable and impressive. Yet, to him, his greatest achievement is his children and grandchildren and he was willing to give up rowing for 31 years in order to provide for his family financially.

Together the plaque reminded me that I have my grandfather to thank for inspiring me to persevere through my initial failures.

That year, I often thought about my grandfather and his lifelong commitment to rowing. He never quit. My grandfather is one of the most talented rowers I know. His living room, covered from floor to ceiling with plaques, medals, and trophies including mementos that mark his sixteen US National and Royal Canadian Henley National championship titles, attests to his rowing successes. In 1959, he was the alternate for the Pan-American Games Trials and was part of the 1964 Olympic committee. But he doesn’t live in the past. He completed his nineteenth consecutive marathon a few years ago (and was only stopped due to a drought cancellation at the venue). And when he can’t get on the water, like when he visits my family in New York, he gets up before the rest of us are awake and he logs 10,000 meters on the rowing machine.

So one day, I decided to seek his advice on how to improve my stroke. After explaining my saga of disastrous rowing experiences, my grandfather told me about his first years of rowing. In high school, he desired to make the varsity quad. After weeks of winning seat races, he did not make the final boating line up. But he used this setback to strike out on his own and develop his skills as a single sculler. This turned out to be serendipitous because it was as a single sculler that he won he won twelve of his sixteen national titles.

Upon reflecting on his story, I returned to Stanford with a renewed passion for the sport of rowing. And this year I had the honor of competing at IRA Nationals in Princeton. More than just participating, my teammates and I brought an intensity and love for the sport that culminated in the long coveted national title. With a trophy in our arms and medals around our necks we returned to campus to take final exams before heading home for the summer.

I’ll never forget the summer before the 2nd grade when my grandfather taught me to row in a single as wide as a bathtub. And twelve years later, on August 13, 2015, we competed at the Master’s Nationals in the “parent/child” event. Of course, with no other grandparent/grandchild competitors, we were allowed to enter this race by simply averaging our ages. As we paddled up to the starting line we scoped out our competition and both eyed the 6 foot 8 son in the bow of the other boat. The competition looked tough.

However, I did not experience my usual pre-race jitters because I was racing with someone with sixty-three years of experience. We began with an intense crescendo and quickly settled into the body of the piece. Each of our two oars entered and exited the water with a seamless repetitive motion. I had the job of conducting our rate from my position as stroke seat and my grandfather matched my movement perfectly. After hearing my grandfather call for our sprint, I increased the stroke rate and we glided across the finish line with not much energy left. We picked up our silver medals and took some pictures for posterity.

While I feel fortunate to be able to now share a story of how my failure turned in success, I don’t need to win tangible medals in order to reap the benefits of rowing. One day, God willing, I aspire to be fit and able to row into my golden years. Outside of just sustained longevity, I admire other traits that my grandfather learned from rowing and work to emulate them in my own life.

He sacrificed his sleep in order to log his hours to train. Later on he gave up rowing for 31 years in order to be a full time father and husband.

He worked long hours to pay for his college tuition because his family did not have the money for him to accept a partial rowing scholarship. Later on he applied this effort to supporting his children and wife financially.

He collaborated with his teammates in order to win races in high school. Now he coaches and mentors young athletes to reach their greatest potential while competing on the Masters level.

We both agree that, rowing is a simultaneously grueling yet beautiful art that transcends earthly experiences and bears invaluable fruits. And most importantly, the perseverance that we’ve been learning from rowing has helped us to grow and develop our faith.

So thank you Papa for giving me the motivation I needed to persevere in the boat-- you are more than a boy in a boat, you are a lifesaver.