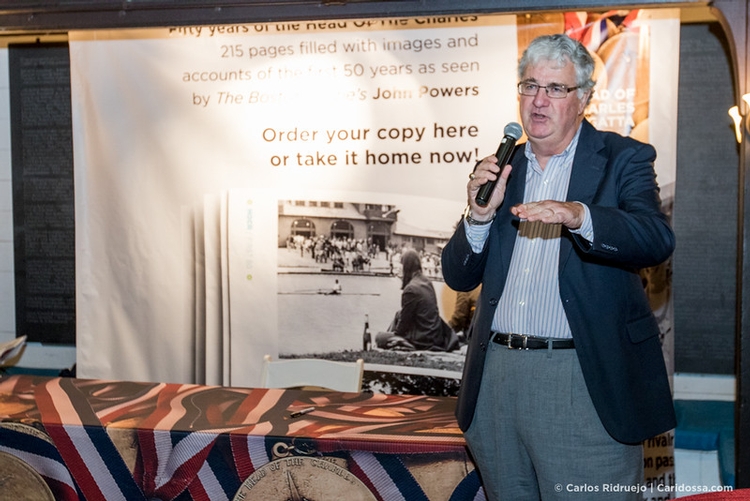 Sportswriter John Powers of the Boston Globe is a physically imposing presence, well over six feet tall and distinguished looking, but he has a friendly, gregarious manner that seems nonetheless to fit. Powers, a 42-year veteran of the Boston Globe, Harvard class of 1968, a Pulitzer Prize winner in 1983 for national reporting on the nuclear arms race, author of eight books and, if you keep up with these things, a rare friend of rowers and the rowing world who is based in the "old" media world of print, covered what may be his final Head Of The Charles last month.

Earlier in October, the Boston Globe announced that Powers would be retiring from the paper; the fact is that Powers accepted a buyout ("If I didn't take it, they would have gotten rid of someone younger," Powers told me) as part of a general restructuring of the Globe's newsroom.

Perhaps the most distinctive thing from a rowing perspective about Powers' tenure at the Globe and his warm and voluminous coverage of rowing at the high school, collegiate and international and Olympic levels is that Powers' writing revealed him to be that rarest of sportswriters: one who actually enjoyed just about all of the sports he covered. row2k sat down for a long conversation with Powers during the Sunday racing at this past Head Of The Charles.

row2k: One thing that's always shone through your pieces in the Globe is that you actually like rowing.

Powers: I think it helps knowing how hard it is to do it. I was captivated by the sport from just growing up here in Boston when I was in high school. The thing is, they actually used to show rowing on TV up here... WGBH [Boston's PBS channel] showed the Eastern Sprints.

row2k: You mentioned that you rowed a little bit yourself.

Powers: The summer after high school I worked at the Union Boat Club, and they had a summer program and I said, 'Wow, so this is what this thing is.' I'd never done anything, but I went out in an eight, was just tossed in with guys who had been rowing at prep school, and after about four strokes I just jammed the oar into the back of the guy in front of me. The coach said, you may want to try sculling to figure this out. So I mastered the gig pretty quickly and then I went out in a comp. And I remember pushing off the dock and putting an oar in the water and flipping just like that.

I did go out for freshman lightweight crew when I got to Harvard that fall. I was 150 or 160 at that point. Of course I tried, as many Harvard kids do, to "eat the whole smorgasbord; you go out for the Crimson and do this, do that, get a job, and I was just getting crushed so I had to give it up after a while. Plus, all of the dryland stuff they were doing...

row2k: Which at that time was still new.

Powers: It was new. We would do, even then, what they call the "Tour de Stade" [running the Harvard Stadium - ed]. You go up all 37 sections. Or you would run the bridge loop. You'd do some erg work (the ergs back then were primitive), or lifting, and then you'd go out and row six miles. We used to have brushes with the freshmen Heavies. What was romantic about it was it would be around dusk, and I remember once we were coming around this curve right here [Eliot turn, at Cambridge Boat Club], going back to Newell and for once we hit it right for about twenty strokes and it was perfect. And I said, 'this is what this is at its best. This is what it's like.' And then you realize that the varsity crew does this all the time.

Getting involved with guys who are that serious about it, knowing how hard it was, and who were that modest about it. The one thing you learn from Harvard and places like it, by the way, is that you get modest pretty quickly when you realize what other guys can do and don't even talk about.

So knowing, liking the sport, knowing how difficult it is and what it feels like when you're doing well was important. And the athletes were always, and still are, appreciative when you write about them. They're tolerant if you don't know much about it, and I think they appreciate if you do know something about it. When I talked to Andrew Campbell for a story I did the other day, he said it was a pleasure talking to someone who actually knows about the sport.

Row2k: Of course, you especially enjoy covering the Head Of The Charles.

Powers: What is nice about this event, it's like the Boston Marathon in interesting ways. A kid can be in the same race as the Olympic champion and have the same experience. I think what makes this race unique, it's the perfect time in Boston; it doesn't get better than this, unless the wind's blowing into the basin. You have this historic river, it's twisty, you've got the Harvard dorms coming up to you with the Boston skyline, all that. It becomes a mecca for people that come. And people who talk about the weaknesses of various points in the course, the powerhouse stretch, so that becomes part of the lore.

There's something here that always brings me back. Especially as you get older, coming back to the same place where you were doing the same thing every year is a comforting thing. That's why the Alumni Reunions at this race are college reunions. I've got my 45th college reunion this week. There's a feeling that we've all been through this together and it's a bond, you know, that keeps you together. The regatta used to be kind of an excuse for dinner, now people are training for it. Now, I am hearing that the trash-talking online is unbelievable. You've got Harvard guys busting Northeastern guys that were in the 1968 race. Now it's a way especially to keep people together who have been scattered all over the country. The number of people that are interested in this is much greater than they were before. Because you realize, 'I've only got one or two more of these in me. My last chance to do this,' and so on. My classmates are dying, they're dispersing.

I think what makes that interesting is, the leaves are always turning when you come here, but the bridges don't change. The same crews will be here, the same people will be here, and that's why every year I was walk down to the boathouse to see the guys I have been covering since 1966. And some of them don't walk as well as they used to, and some of them are bigger than they used to be, and some of them have their sons rowing in their places. But there's the annual renewal of the thing that makes this event unique. I care deeply about it.

row2k: One of the things that has always come through in your writing was that, despite being a Boston person and a Harvard person, you were able to shy away from some of the homerism that rowing people often get accused of. How were you able to bringing the joy of the sport on a greater level to people around the country, even from the vantage point of being an insider?

Powers: Well I think what does help here, especially for the sports I would cover for the Globe, is that most of the Olympic sports, or even soccer, require some explaining to the average reader. And the idea was to make it understandable, like 'why should I care about this particular thing?' So it comes down to writing about people. And what was good about rowing was there was enough variety in who was winning. You realize that there were great stories out there besides what is happening in Boston.

Once the US went to a camp system in rowing for the Olympics, there were many more stories out there. When the Men's Eight is going to Mexico City for the Olympics in '68, they're all Harvard guys. Even in '72 there were a fair number of Harvard rowers. By 2004, I remember seeing Bryan Volpenhein, he's from Ohio State, and I said, 'When did that happen?' And that's when you start seeing people are coming from all over. They all have the same appreciation for it.

What's also interesting about rowing too, is unlike other sports, you can start and go on forever. (USA Women's Nat'l teamer) Elle Logan told me the that reason she switched to sculling is because of what she saw at her first Head of the Charles, a woman who was ninety years old and rowing. She said, 'I want to be that person, but I can't do it as a sweep rower.'

So I think that's what's been fun is bringing that to the average reader and being able to get a personal story that transcends the rowing. Even if you don't know port from starboard, these are personal stories that people identify with. As I said, one thing I love about rowing is that it's something you could be getting better at, at age seventy.

Row2k: Do you still get out on the river?

Powers: It's been killing me to not row for the last year or so. At this age, usually, your doctor tells you if you can, your doctor or your spouse. 'I don't feel responsible if you go out there,' that's what they told me. They said, you have to be careful about rowing. If you have a problem out here, that blocked artery will get you. I hope to get out there next week. It will be great, as long as things go as planned. It will be 10 in the morning, and all the college kids are going to be in class. I'm going to be coming around that stretch downriver, it will be me and the geese. Especially at this time of year, it's dappled, and it's going be relief to row through the leaves. I think if I didn't row it wouldn't be as much fun. But to still have these calluses. It's been a year, and even then I'm not out there every week. But the calluses, they stay, because if you row enough they stay.

The first time I haven't rowed in a while, the first couple of hundred yards you get in the groove and you see you're gliding past the trees. The terrifying thing is having a row here, and suddenly the Harvard Varsity is tearing around the bend. I remember one year I was out there, a perfect day, just like this, and Harry Parker's going by and saying "now there's a fair weather sculler!"

row2k: You've been shouted at by Harry Parker.

Powers: It was a real privilege.

In part 2 of our interview, Powers talks about the changes in the news business and sports departments, and what these changes mean for sports like rowing.