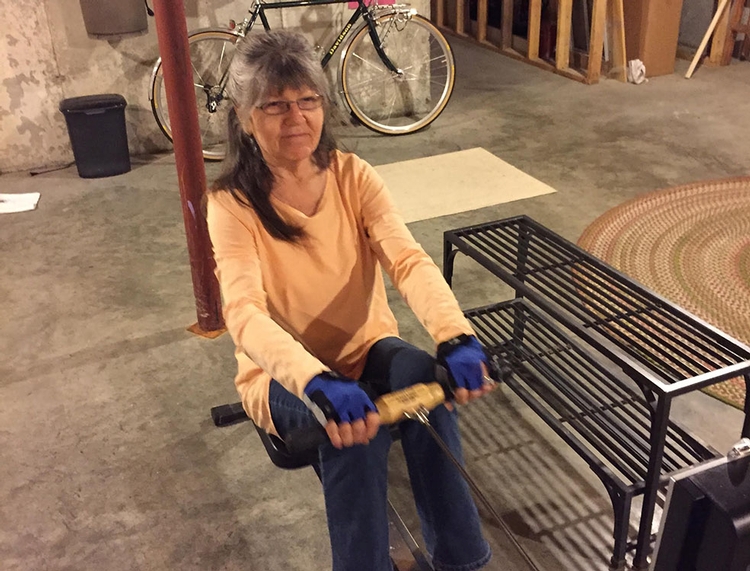 If you participated in the Concept2 Virtual Team Challenge (VTC) this year, then you'll know these two names: Damien Digbeu and Darlene Brennan – two rowers who erged more meters than you, or anyone else. No matter how hard you tried, you could not catch up to them, and you couldn't help but asking, "how did they do it?!"

row2k caught up with these two chart-topping athletes, who broke the 3 million meter mark in the month of January. That's over 100k a day. Talk about dedication.

Digbeu, 44, lives in France and has been erging on and off for years, but decided to tackle his very first Virtual Team Challenge this year. He had been out with a knee injury for a while, and the Challenge seemed like a good way to push his limits now that he was injury-free.

On the other hand, Brennan, 77, a Vermonter, is a seasoned veteran of the VTC and other indoor rowing challenges; she has won many times in the past, most recently in a streak from 2012-2014, giving many much younger athletes a serious run for their money.

While most rowers view erging as a means to an end, the machine is the goal for both Digbeu and Brennan - raking up the meters is the race. Neither row on the water competitively, though Brennan has tried it out.

"I’ve never been a competitive on-water rower, although I did take some lessons in an eight few years ago," Brennan said. "Yikes! Our crew was a sight to behold. I’ll stick to indoor rowing."

What motivated these two individuals to spend an entire month doing little other than erging, if not the prospect of a spring season, of winning races on the water? Same thing that motivates many a rower: competitive drive.

"I had no specific goal, but I thought to row 50k per day with a dynamic stretching workout was sufficient," said Digbeu, who completed a total of 3,131,138 meters in January. "Then I increased the time of my sessions by persuading myself that I had do more distance if I wanted to keep my physical and my mental strength for the next day."

For Brennan, the she had a specific goal going into January, and despite being edged out by Digbeu, she reached her target with 3,027,643 meters.

"For January I wanted to row more meters than I had rowed in the previous September challenge - I rowed 2,830,585 meters in September," she said. "Also, I had a goal - more of a hope actually - to row more than three million total meters in the January (challenge). Only a handful of people have ever done over three million meters in previous challenges."

In fact, this year was the first time that the 3 million meter mark was broken in the January Challenge.

"Times do change: ten years ago rowing a little over one million meters would have been a first place finish," said Brennan.

Even with all the competitive drive in the world, the obvious question is the logistical one: how does one go about rowing 100,000 meters a day, every single day for a month? Digbeu and Brennan each had their own ways of splitting up the meters, but regardless of the breakdown, one truth remains: when you row 100k a day, you do very little else.

For Digbeu, the mental challenge of sitting on the erg for so many hours a day overshadowed the physical one.

"I decided to complete 10k per hour, including some stopping to stretch," he said. "Rowing for such a long time long time demanded a certain level of motivation; I to pushed myself not to my physical limits but to my mental limits as well. "

Even Digbeu is taken aback by Brennan's streak: "Darlene impresses me so much," he said. "I believe it is very easy for her to do 100k physically, but I wonder how mentally she manages to make such long distances as regularly every year!"

The challenge isn't only in the meters, but in figuring out how to 'do life' at the same time – thankfully for Brennan, her husband steps in and takes over some of the chores throughout the challenge. (Which begs the question: Would you rather clean the bathrooms once a week or erg 100k a day?)

"I tried to finish 50k in the morning and another 50K in the afternoon," Brennan said. "If I didn’t hit 100k by dinner time, I’d row a bit more in the evening. My husband is very supportive as he takes over all cooking and household duties for the month. He’s pretty happy when the challenge finally ends."

Despite their similar goals in this year's challenge, Digbeu and Brennan view their future on the rowing machine very differently.

But as for Brennan, she hopes to get even more meters next year – and hopefully a win.

"I’m very competitive and challenges are fun for me. I just enjoy pushing my competition and making them work for it," she said.