row2k Features
row2k features > Competitive Edge > Coaching
What a difference a lane makes
...or, how much difference does a lane make? 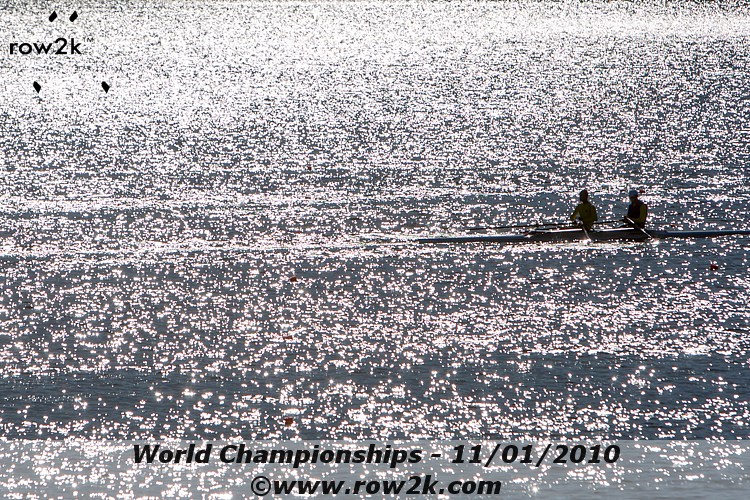 Looking a bit bumpy on the far side of the lake
As most sailors know, the force of the wind varies as the cube of its velocity, so a gust increase of 2.5x produces a force increase of over 15x – enough to push boats around. On courses with pronounced crosswinds, this can make a difference from lane to lane.

As a case in point, at a recent Masters regatta, some rowers felt disadvantaged by their lane (some rowers might have felt advantaged as well, but they didn’t complain). Analysis of finish times shows that, in fact, crosswind created a substantial bias. Lanes in the center of the river, exposed to the blast of wind gusts, were slower than lanes in the lee of the river bank.

The analysis compared times recorded in lanes 1 (exposed) and 6 (sheltered). Only finals of events with preceding heats were noted, in order to improve the likelihood of racer equality between lanes 1 and 6. Lane 6, sheltered from the crosswind, did much better:


The wind was blowing hard but not a hurricane with average winds at 10mph and gusts of 20 mph over the three days with little variation (the prevailing wind is a strong westerly).

Wind adjustment factors for lanes 2 through 5, in the table below, were plotted on a curve between the values for lane 1 and lane 6, based on the exponential relation of wind force to wind velocity (which might be wrong, given the vagaries of wind blowing off a lee shore.) Divide finish time by the lane factor in the table, to see a wind-corrected time better than what was rowed (unless you were in lane 6).

If the water is wide enough, the solution is to buoy the lanes as far as possible from the windward bank. Otherwise, everybody needs to hope for luck in the draw.