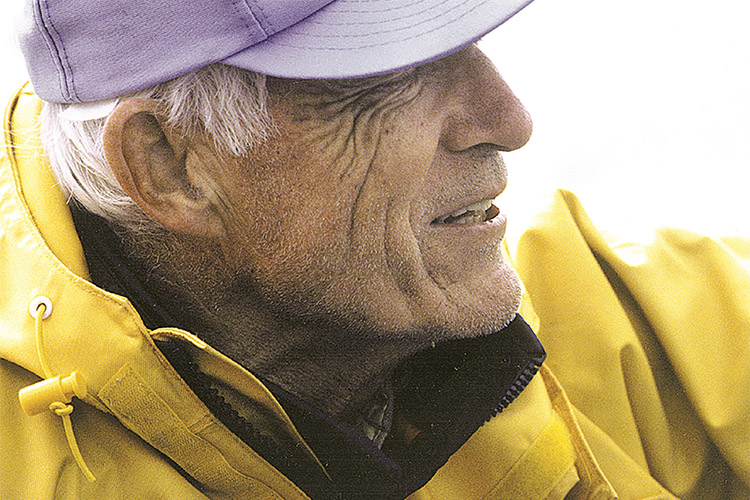 In 1916, World War I had been raging in Europe for two years, and the United States was poised to join in.  Rowing at the University of Washington and everywhere else had been suspended.  In their shop near the UW campus, there were no shells for George and Dick Pocock to build.  The brothers found themselves in a desperate situation.

At the same time, William E. Boeing was establishing a company in Seattle to build military airplanes and needed help with seaplane pontoons.

According to Stan Pocock, George’s son, when Boeing visited the Pocock shop and “saw the kind of work Dad and Uncle Dick were capable of doing, he hired them.  They stayed with him through the war and for several years after it ended.” In 1922, the Washington coach was Ed Leader, and when he was offered the coaching job at Yale University, he invited the Pococks to come along to the East Coast.  George declined, but Dick accepted.  That left George to carry on alone at Boeing as a foreman.

A few months later when the next Washington coach, Rusty Callow, came to George to ask him to build an eight, George agreed to do it in his spare time and on his days off if Rusty could find a spot on campus for him to work.  Rusty offered the upper floor of the old seaplane hangar which the team was using as their shellhouse. But when word leaked out, a story titled “Pocock to Build Shells Again on University Campus” appeared in the Seattle Post-Intelligencer, and George felt he had no alternative.

George: “I just could not stay with Boeing because a man cannot split his loyalties.  In my case it involved, in the words of the poet, ‘forsaking the substance and grasping the shadow.’”

Stan: “When he first started out, he was struggling.  He had to try and make a living after having left a good job at Boeing.

“When he built the first eight, he asked himself, ‘What should I charge for it?’ because he had few expenses.  He was on his own in the university shellhouse and had no rent to pay, no insurance, so he checked into what the eights from England were costing because that was where everybody in the East was getting their shells.

“He knew George Sims [a boatbuilder in Putney on the Thames in London near the start of the Boat Race course].  They had been apprenticed together.  He thought he was the best boatbuilder he ever knew.  At any rate, he wrote to George and asked him, ‘What are you charging for an eight these days?’  The answer was $1,250 [which must have yielded a reasonable profit considering his lack of overhead].

“But that stayed the price of a Pocock eight all through the Depression up until World War II, and when we started up again in ‘45 . . . still the same.

“It turned out that a portion of the pay that he and Uncle Dick had received while working for Boeing had been paid in Boeing stock, and as that company grew, my dad slowly realized that he had become financially set for life.  He was very conscious of trying to help out the sport of rowing financially, and so he passed his good fortune on and kept selling shells at 1922 prices.

“Well, nobody could compete with that, and so an unintended result of this was that nobody could go into the business!  We got wind that Chris Craft were interested, but they backed out in a hurry.  There was not enough in it.

“But that was not the intent at all.  I know that for a fact!”

Clubs, high schools, prep schools and colleges all bought Pocock shells.  Pretty soon, virtually every boat from singles to eights in every boathouse in the United States was a Pocock.

George and Stan worked with everybody regardless of their financial condition.  There were plenty of deals made, agreements to pay later, orders on account.  Some boats never did get paid for, but still George and Stan sent the boats out.

Stan: “I remember we once got a letter from Al Lawn.  He was coaching some high school on Long Island Sound.  They were digging clams to raise enough money to buy an eight!  What were we supposed to do?

“These were kids and their coaches who were struggling to make the sport grow.  We felt an obligation to do what we could to support them.”

Pocock Racing Shells was essentially subsidizing the Sport of Rowing in North America, and did so from the 1920s all the way to the 1960s when competition from European and North American boatbuilders finally began to create a viable for-profit business environment for rowing equipment after half a century of unnoticed and underappreciated charitable support from George Pocock and son, Stan.