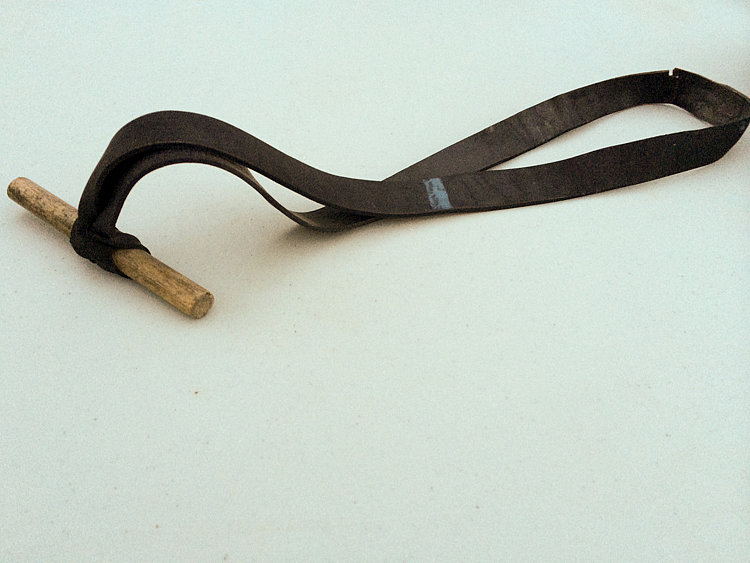 Some hacks are inspired by need, others by neat ideas that we see working elsewhere; here is a hack that is darn-near universal now, and it really owes its origin to a bit of both: the Rigger Bungee.

That’s right, once upon a time, there was no such thing as a bungee that held riggers together, and in those dark, dim ages, folks used duct tape, electrical tape, and even--if you can believe it--rope to bundle up riggers.

Nowadays, when pretty much every team (except this one!) uses bungees, and when every Home Depot stocks "tarp bungees" so perfectly suited to the job that it seems laughable that they were not specifically designed for riggers, it may be hard to remember those ancient if not barbaric days when you had riggers covered with old tape residue--or you actually had to know how to tie a good knot.

But gather ‘round, loyal Rowing Hack readers, for here is the true tale of the humble origins of perhaps the most ubiquitous hack ever to grace our noble sport and, like most great rowing ideas, it was dreamt up during the long, cold winter training season.

Out where that winter season is often deepest, the Wisco boatman had gotten tired of the aforementioned tape gunk, and was looking for a less messy and more reusable fix. Taking a page from sailing, where rope ties with toggles are used to keep sails furled, he cut up some used rubber inner tubes and plugged a wooden dowel through the end. The rubber allowed his “ties” to stretch and bundle the rigger tightly--in a presciently bungee-like manner--while the dowel provided a quick way to "tie off" the loop and secure the tie to itself.

As an added bonus for this inventive boatman--who was, after all, working for a penurious child-of-the-Depression head coach and only had a budget of whatever few pennies were in the petty cash drawer--the cost of making the first 100 rigger bungees was under $10 for the dowels, and when the rubber inner tubes gave up the ghost after a few years, the dowels could even be reused!

The Badgers started hauling their riggers east with these "inner tube ties" in the early nineties and, while folks continued to use tape for years--and even got into “rigger wrap” for a decade or so when athletic trainers started leaving their plastic wrap unguarded--these ur-bungees clearly made an impression, and the idea of a reusable "tie" to do the trick of keeping the riggers stacked compactly was really just waiting for those ready-made bungees we see on almost every trailer these days.

So, the next time your team is de-rigging and the call goes out for the rigger bungees, give a quick tip of the cap to that intrepid boatman whose winter tinkering started us all down the stretchy path of the Rigger Bungee, and who has saved your riggers from residue, your budget from disposable tape and wrap "overruns," and you from being tested on your knot-tying skills.

Do you have a trick this worthy? Or a great way you’ve cooked up to bundle your riggers? Share your tips--and hacks--in the comments below.