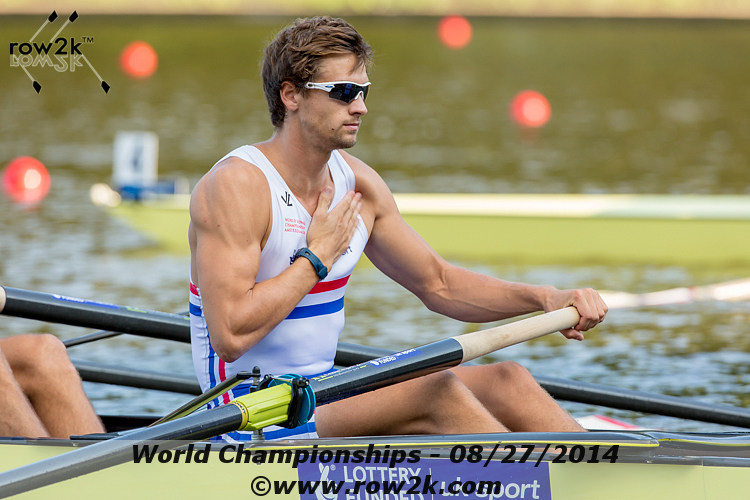 Chest-beating: Note the impact crater behind his hand


If you spend a lot of time on starting pontoons, as we do, you become both somewhat expert in and curious about the range of human behavior on display before a sporting event that brings the array of demands on the body and mind that a rowing race brings. From laughing to scowling; from sitting stock still to being in constant motion; from chattering nervously to utter silence; from eyes in boat to scanning and staring down everyone in sight – you will see all of these and more.

(And by "and more," I mean it; we have seen both men and women slug themselves in the face before a race, wow.)

But one thing that has really become de riguer of late is tons of muscle slapping. Without intending to be genderist, this is especially prevalent when the men's eights arrive at the line, whew. For example, the new World Championships schedule puts the men's and women's single right before the men's eight, and after several races of quiet, pensive single scullers pulling into and taking off from the line in near-silence, the place explodes when the first men's eights arrive, whoa.

There is a lot of yelling and gunwale-banging, even some oar-rattling (akin to saber-rattling??), and all that – but there is also a ton of muscle-slapping – arms, legs, chest, shoulders, everywhere. And it does go on in other events – it's just that it's really obvious when 50 or so pretty large dudes are all doing it at the same time. But just because it is most obvious in the men's eight (and in the men's quad; Me Whelp) doesn't mean it is restricted to the big boys' boat; in fact, the regatta at which I probably saw this the most last spring was the heats of the women's NCAA Championship - not to mention in light women's events at Worlds. All the cool kids are doing it!

So the question for today is – does all that muscle-slapping actually help? We did some research, and it seems that the jury is out, to some extent. After quite a bit of research, there seems to be zero discussion of the practice in medical communities. In fact, the only mentions of it we could find were in bodybuilding forums, and that is all just anecdotal evidence.

A couple theories did emerge from those discussions, along the lines of the following:

Next we spoke with a few sports med doctors and PT's, who mostly admitted that they knew it happens, but were not sure why. Finally I got in touch with USA national rowing team PT Marc Nowak, who is a truly innovative and gifted PT, and he shared the following with me.

This is pretty interesting. I have seen massage therapists at Worlds vigorously slapping muscles (cupping) on athletes prior to racing. This sharp stimulus may increase muscle tone and heighten sensation for a brief period of time, but most likely has no significant carry over for the start of the race or while racing. I have never seen anyone punch themselves in the face prior to a rowing race as in your early photos of this IRA gallery. It may simply shake his awareness up and heighten his sensation at the starting line.

Other than that, I believe that it all simply serves as a routine performed to get the athlete in the proper state to begin racing. For example, just watch any baseball batter before stepping into the batter's box. They all have a routine /ritual they perform (touching helmet, fixing pants, adjusting gloves, tapping shoes with bat, etc.) to get themselves in an "alpha state" - focused and ready to perform (ed note: we'll save this for a future article).

Punching yourself in the face is a bit extreme, but you see this on football teams (slapping helmets and shoulder pads) prior to the game, or more commonly prior to a boxing match where the fighter or trainer slaps the athlete in the face. It gets you up and ready for the contact that you will experience in a game or match, "shaking out the cobwebs". Once the real hitting starts or the race begins, the real adrenalin rush starts and its' all reaction at that point, there is no real thinking involved.

The slapping, hitting, or self-induced pain may be a pre-adrenalin physiological pump to get your adrenal glands to be prepared for the real thing. I don't really know and I do not have any scientific data to support this. You may want to research "alpha state" and see if there is science behind it to help explain your questions. I do know that I used to smash into lockers before football games. It just got me psyched up and prepared me for the hitting that was to come. Once I did that, I knew that I was ready to get out on the field.

Much like Nowak, before football games when I was 9-10 years old, the Ventnor Pirate football coaches let me into a storage room that was rarely used, and gave me and Frankie Accardi free reign. Frankie kept at it with me for the first year, and when the next season arrived, I kept at it on my own. Part-way into the second season, one of the coaches heard a lot of noise, came in to see what was going on, and realized I had taken down an entire wall of dry wall with my bare forearms (it didn't work as well with elbow pads). After those sessions, I was both a) warmed up, and b) definitely up and ready for the contact.

Or as Nowak concluded, "As the saying goes, 'If it works, it's not weird.'"

So slapping muscles may or may not help on a strictly physiological basis – but it doesn't hurt, and may have other positive outcomes pre-race. Unless you clobber yourself in the face, which I can't imagine does not hurt.

Do you muscle-slap before a race? If so, why? Let us know in the comments! 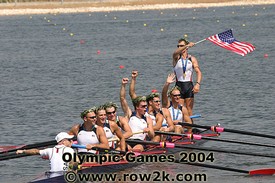 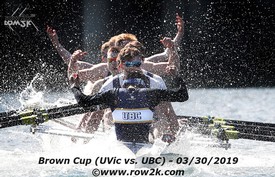 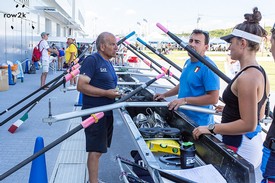 How To Do A Simple Rigger Height Check 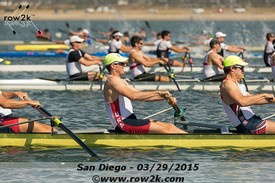 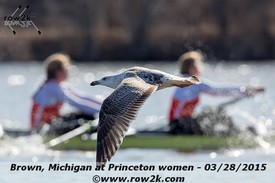 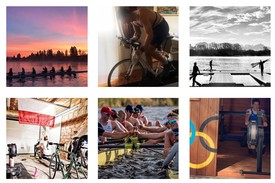