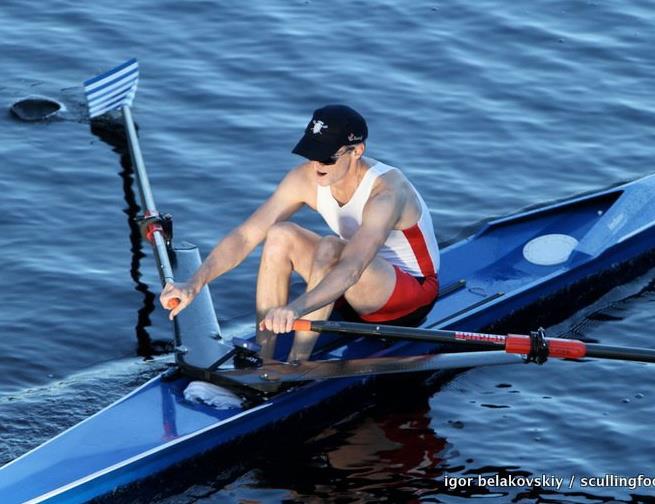 John in the 1x on the Charles; photo: Igor Belakovskiy
So this is kind of a comeback year for me, after a shoulder injury sidelined me in 2013. But wait a second – it seems like déjà vu all over again (thank you Yogi Berra). I'm ALWAYS having a comeback year, or I'm always in the midst of recovering from some kind of injury or other. Welcome to masters rowing. The Geezer Group. You're not as old as you feel – wait, actually, you ARE as old as you feel. The older you get, the faster you were. Never show up to a regatta without being fully armed with an arsenal of excuses. Ratings caps during pieces? To hell with that. If you're not cheating, you're not trying. You get the idea.

I once said to my dad upon greeting him, "You look great!" He said, "Son, there are three stages of life. Youth, Middle Age, and "You Look Great!" You actually DO get to the point of feeling like, "It's just nice being out here." Even if you are competitive as all get-out, like some people I know (who me?). To quote Keith Richards, quoting George Burns, "It's good to be here. It's good to be anywhere."

I don't understand people who don't get injured. Sean Wolf, my friend and fellow Riverside club member, never gets injured. I don't know of anyone – anyone – who has trained with the intensity and consistency that he does, all year 'round, and does not get injured, and I've known him for 14 years. Now there are those at other clubs – Benning, Bohrer, Cone, etc. (you guys know who you are) – who are in the same league in terms of always having it, year in and year out, but I don't know their history quite as well. These guys (and gals – Hello CB, Linda Muri, Ellen Kennelly…!) have something going on that I sure as hell don't have. I know that things happen to Magnificent Masters such as these, but you'd never know it by the way they row. It's awe-inspiring.


The season usually starts out innocently enough. After barely doing any winter training, I get on the water some time in late March (or mid-April last year, thanks to The Winter From Hell). It's cold and I'm rusty. But I'm all excited to be on the water, and I feel my competitive juices coursing through my veins. I do something stupid – like too much pressure in a strong headwind – and KABAM. Something goes. Hamstring, back, intercostal, knee, toothache… something happens that isn't quite right. And it's early in the season, so you don't want to mess with it. You take it easy. Then by the end of June you realize you only have about 100 miles. You've taken it a little too easy. So you have to play catch-up, thereby risking yet another injury. Rinse, repeat. It's pretty much the typical story of a typical season for me.

Then there are the atypical seasons; last year was one. During one of the massive blizzards in Boston in January of 2013, I was out shoveling snow, and there was a LOT of it. I live in the city, so by law (and common courtesy) you have to do your driveway, your car, the sidewalk, and then keep doing all of the cement-like sludge in front of your driveway that the plows keep filling in right after you just finished (and they always seem so happy about it – that's what gets me). I was acting a bit too macho (i.e., stupid) and was trying to turn it into a "workout."

So I'm shoveling like a madman, getting all sweaty and feeling all manly. And afterwards, my shoulder hurt, in a way that was definitely out of the ordinary. For the next several weeks and months, it kept hurting and became less and less mobile. Of course, I didn't go see a doctor, because that would mean admitting something was wrong, and the rowing season would be starting soon.

So I get out there on the water, and it hurts. Not good. Sigh…I didn't even have the chance to do anything stupid during a rowing workout! My stupidity preceded the season! So I try and take it easy, reducing my rowing, and just doing steady state when I did row. It only got worse. I finally went to see a doctor (a very good one, thanks to a reference from Kane Larin at Community Rowing) – Matt Provencher at Mass General, who is not only an orthopedic surgeon, but the Chief of Sports Medicine at MGH and Medical Director of the New England Patriots. Hey, if he can't fix me, no one can! The diagnosis was "frozen shoulder," which pretty much is what it sounds like. It only takes a few years or so to heal – no big deal. So that kind of put the kibosh on the rest of the season, and I went my first season in 28 years (it would have been my 29th) without racing. Sigh. But I did PT, stayed off it, and lo & behold, I'm back.

I could bore you with my other injury stories – a nasty two-year bout with plantar fasciitis in my right foot in 2006 (I like to call it plantar fascist, the Third Reich of foot problems); the hamstring injury that kept me out of NSR in 2002 (and the rest of the season); all the things that got in the way of Major Glory!!! But that might put you to sleep. Hey! Wake up!! Oh yeah. That's the other thing about injuries – you feel compelled to talk about them with anyone who will listen. You approach your friends and start talking about it, and they all move away slowly. "Um, I just remembered I have an enema scheduled… gotta go!"

So I will spare you the rest, and happily this year I am fairly injury free. But wait, I am kind of feeling some of that plantar stuff going on in my left foot… my hamstrings are kind of tight… my back doesn't feel quite right… Yeah, it sucks getting old. But it's better than the alternative!