People say I’m chronically late. I kind of am. I’m usually late for pieces on Tuesdays and Saturdays – or just barely in time. I took a train to NYC a few weeks ago and they shut the door right after I got on. Maybe I was born late.

I promised this last article to Ed Hewitt in the weeks after my trip ended, but as life unfolded, things got in the way and it never got emailed. I did, however, write stuff down, and, reading it over, it’s fun to look back. I’m glad I did a final accounting – and even more glad I saved it. Besides, I promised Ed the article. A good rower never breaks his (or her) promise.

So here it is, sports fans: Some interesting tidbits from The Epic Rowing Road Trip. Which, if you by any chance purged it from your memory, took place from October 27 to December 8, 2012.

In no particular order, the highlights and factoids are as follows:

Number of states in which I was physically located: 26, or half the number in the Union. Not bad for six weeks. In order, they were:

On the way back, starting in Newport Beach, California: Nevada, Colorado, Nebraska, Iowa, Illinois, Michigan, Indiana and Ohio. (Then back home through New York and into Massachusetts, already counted.)

Miles traveled: almost 11,000. And other than a headlight replacement and an oil change, the VW Passat Wagon required nothing but gas and lots of TLC.

Number of speeding tickets: “Only” four. New Mexico, California, and two (he says, shamefaced), on my LAST day – yes, two in one day – in New York State. They’re not too crazy about people speeding in the Empire state (those cops are mean). In California, on the other hand, they encourage it. At $600 a pop, it’s the one thing keeping that ill-budgeted, overspending state from going completely under.

Ten paperback novels. Never touched them. Many evenings, I would read a few pages of Thich Nhat Hanh’s “The Heart of the Buddah’s Teaching” before crashing. Also brought Tim Riley’s biography of John Lennon – half read – which I didn’t open, but having Lennon looking at me during the entire trip somehow gave me comfort. Also never used the $30 Walmart tent I bought in San Antonio. Nice tent though. Gave it to my son for Christmas.

Number of times slept in car: Three. Northern Virginia campground (never make a fire before bed – everything smells like smoke for days); truck stop, 30 miles east of Houston; Morro Bay campground. Morro Bay was by far the best. It was like waking up in heaven.

State with the nicest people: So many. People are nice everywhere you go, as long as you’re nice to them.

State where random people were mean for no particular reason: Texas.

State with the stupidest people, based on drivers and random people encountered: Iowa – no question. But then again, I was in a hurry and in a bad mood.

State with the best drivers: California – Southern. Hands down. They drive fast (so do I), but they know what they’re doing.

State with the worst drivers: Iowa. No question. Illinois truckers a close second.

Bane of my existence on the road: Truckers. God how I hated them. I’m convinced that they are bored and like to mess with you. A line of 4-6 trucks are moving along in the right-hand lane. As you approach, the one farthest back moves over to pass the rest of them, and takes forever doing so. He sees you coming, and he waits until you get there before moving over to pass. Then you watch as your $10,000 carbon-fiber boat gets whipped (“bap-bap-bap-bap-bap-bap-bap-bap…!!!!!”) from side to side as a result of the crazy wind from being behind the truck at 80 mph (er, I mean 65). Yes, people, this happened dozens and dozens of times. Over, and over and over. How I hate truckers. And my boat survived. Van Dusen makes a great single scull.

Comments about boat on car: Way too many to count. Every stop, every fill-up, almost every person in sight. “Wow. What is that thing? Is that a boat? I told my wife it was a boat. Tell me something, how do you keep from tipping over in that thing? Wow that is one long canoe. Is that a kayak? It looks like a kayak. Kinda long though.”

Best comment about the boat: Driving through New Mexico, just after dusk, near El Paso, U.S. Border Patrol had a routine road block – stopping every car on the highway, drug-sniffing dogs, cops, guns, the whole thing. Big deal. When I got up there, the two armed, uniformed guards looked at me, the boat, the car with Massachusetts plates – the whole package. One of them cracks a half smile and says, “You’re gonna poke someone’s eye out with that thing!” The other one, half smiling, says, “Are you a U.S. citizen?” I said yes. “Go on…” He smiled. “Get outta here.”

Scariest row: Lake Kaweah outside of Vasalia, California. Storm moving in. Lots of rocks. Big waves and strong, gusty wind. Scary. The alligators were a close second, but I wasn’t really scared until I gave it some thought later that night.

Coolest human encounters: Again, too many to count. But meeting and hanging out (however briefly) with two-time Olympic Gold Medalist Susan Francia, who let me take several selfies with her, was pretty damn cool. Another top contender was Tulane Coach Bob Jaugstetter, who, upon insisting that he take me to dinner AND show me around the French Quarter after already being so gracious about letting me store my boat and row out of his facilities, said, “You don’t understand – this is New Orleans. THIS IS WHAT WE DO.”

Worst part of the trip: Coming home. After the wonderful “Heroes Welcome” I got at my beloved boat club (Riverside) wore off, I realized that I was still unemployed, still broken up with my girlfriend, and that I could no longer live the dream of driving around the country with a single scull on my car saying to random strangers, “Hey, can I put in here?”

TO COME: For those who are interested – the continuing adventures of the 50s-ish masters rower. Stay tuned. 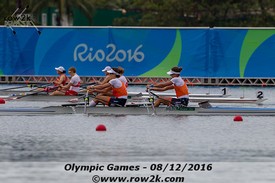 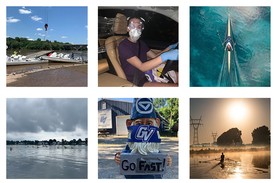