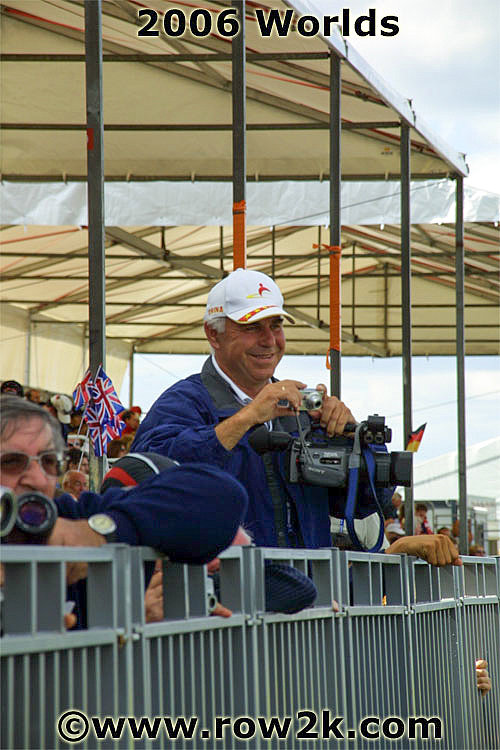 Igor celebrating gold medal of one of his Chinese crews in 2006
A remembrance of Igor Grinko, by Brian Jamieson. Igor was a great man, coach, and friend, and will be greatly missed. See also Ed Bell's thoughts on Igor from this past fall here.

It's hard, maybe impossible, for any one person to take the full measure of a man, but sitting on the receiving end of Igor's megaphone for five years does give one an interesting perspective. As a coach he was determined, ambitious, stubborn, impatient- but also funny and perhaps not always so terribly unkind. "Your rigging..." he told me, the first time we met, "...it is not a benefit." Then: "but I think you can go to Olympic Games and be champion."

More than twenty years later, it's not entirely clear to me what constituted a champion in Igor's book. Certainly, it was nothing but the gold for Igor. Every time we saw him after our silver medal effort in 1996, Igor would scold, nag and pester us—"why did you no believe me? I tell you, you could have been Olympic champions! You just need go 2.2 seconds faster." And (mimicking us), "oh Igor, I see now… you were right!"

Igor's demands were simple: he asked for a full and unconditional commitment-- to his way of rowing, his view of racing, and his training regimen. Everything else-- family, job, fun-- would wait. We were flaky and distractible, barely out of our teens and sex-crazed, and doomed to failure. We rolled our eyes, we protested, we complained, we snuck out. But, we also listened to Igor, not only through the megaphone while we rowed and he coached, but sitting next to him on busses and planes on our trips all over the world to train and race. And the part of his message that I have hung onto most strongly is the singular focus that Igor demanded. In fatherhood and in business -- as in rowing-- I've found that I am at my best, and worthy of calling myself a student of Igor's, when I am truly focused on the important things in front of me.

Focus is a word that is so easy to misunderstand, to fake, to dismiss as trite cereal box fodder. And yet, once you see focus- singular and burning in a man like Igor Grinko, you realize how rare it actually is, and you are willing to strive (imperfectly, haltingly) for it again and again.

During his last months in the hospital, Igor proudly held up our Olympic silver medal to a parade of nurses coming through his room, saying, "Look! my boys won a gold medal." Historical inaccuracy aside, it was a proud moment, mostly because I felt that in some way he had looked deep within me and seen the stuff I'm made of-- imperfect, second-place stuff even on the best of days- and yet he accepted me, he worked with what he had, he shaped me, and in the end he judged me to be a champion.

Igor- our coach, mentor, and friend- will be missed.