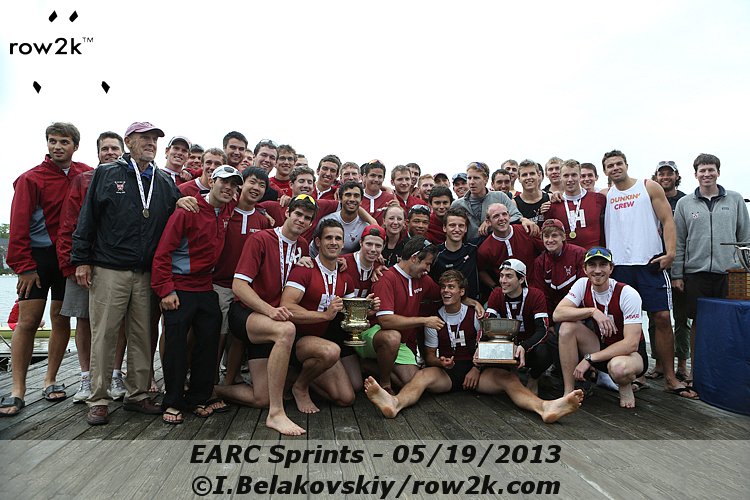 Harry and the Harvard squad at the 2013 Eastern Sprints
After a two-year bout with myelodysplastic syndrome, a type of blood cancer, perhaps rowing's most legendary - if it is even strong enough a word – oarsman and coach passed away this evening, June 25 2013. There may be no other living oarsman or coach whose passing would leave so vast a gap in the rowing world.

To try to put a point on the contributions that Parker made to the sport would be almost futile - his influence is felt in almost every element of the sport of rowing as practiced in the 21st century. Don't follow, or don't think so? This may help: Harry very nearly single-handedly invented the fall collegiate rowing season.

Another: Harry was coach of the first US women's crew to compete in the World Championships in 1975, and coach of the bronze medal women's 8 at the 1976 Olympics. According to Dan Boyne, the originally reluctant Parker rallied behind women's rowing, and his "enthusiastic support helped put women's rowing on the map," as noted by Red Rose Crew author Dan Boyne.

Here's another: a bunch of scullers training under Harry's supervision out of the Newell Boathouse in 1980 created the CRASH-Bs, the first move toward making ergometer training an absolutely fundamental part of the sport.

Edit 5:30am 6/26: Parker is also considered likely to have invented - or if he was not the sole inventor, he played a part in the creation and is almost entirely responsible for the widespread adoption of - seat-racing; enough said.