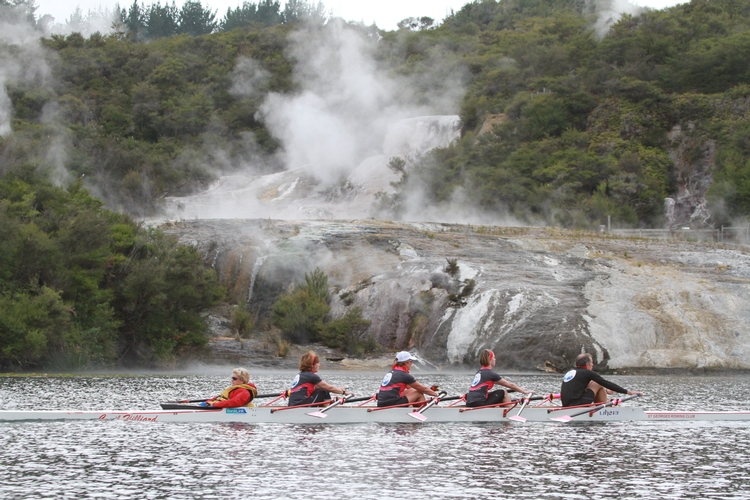 See a photo gallery from the trip here.

I write these words in praise of many things. In praise of the Waikato river with its swirls and currents, its hidden corners and sandbanks, and in praise of the people who took the time to paddle with us – local people, friends, and foreign people who came a long way to be here who are now friends after spending five days together.

Hoea Kaha was inspired by the a group of us being the first NZers to row the Ralley du Midi in France, the concept of touring a country by its waterways which is prevalent in Europe, and there is no better waterway than the Waikato River. ‘Hoea Kaha’- to inspire us to ‘paddle strongly’ because that’s what it means. And shirts emblazoned with ‘he piko, he taniwha’ to remind us that there is a taniwha (water monster) on every bend of the river. Some crews discovered this more than others.

The journey started in Broadlands near Taupo with a blessing from Reverend Garmonsway, a blessing and a light sprinkle of misty rain… and then down the river came five double hulled waka, chanting and beating a rhythm on the gunwales with their paddles! What a magnificent sight and an auspicious way to start our journey. The waka were travelling the same part of the river and we would meet them again later in the morning.

We dined like kings at Orakei Korako and wandered around the geysers and mud pools. We could have sat in the sun for another hour at least, chatting, relaxing.. the afternoon row was more difficult with open water and a strong wind – not to mention speed boats and jet skis to avoid. A long 11 ks in tricky conditions.

Little Waipa Domain the next morning – the quiet DOC reserve with tents and campervans dotted around, (and kids hunting for Easter eggs), was interrupted by our arrival – truck and trailer with eight boats, people unloading, rigging, a bus with rowers tumbling out, and most distasteful of all, a mobile coffee truck. I didn’t mention that we were travelling with flat whites and lattes. The tent community was intrigued and then lined up with us for a coffee.

This corner of the world was stunning – deep green river like a mirror. 23 kilometres with a final two kilometre sprint on the world acclaimed Lake Karapiro rowing course, with “we are the champions of the world’ blasting on the sound system. The energy and spirit that was put into this sprint was admirable! And admiration too from the Deputy Mayor of Waipa District Council who provided us with a story of World War 2 bravery, and some lunch. Perfect. And then into the bus and driving to Cambridge for more rowing - 27 ks though The Narrows - such a beautiful stretch of water, swirling with unexpected currents, bounded by New Zealand bush. 83 ks covered now, half way there, and running out of plasters for the blisters..

We made it to Hamilton, with comfortable beds booked at the Ibis. I haven’t mentioned that this is a race of sorts, and the competition is strong – it’s a telling 23 kms to get to Ngaruawhahia Domain for the most delicious picnic. Rowers fill up on salads and meats, the most beautiful array of cakes, and then find a space in the shade to have a sleep. After lunch the competition is diluted by mixing the crews up for a meander over the next 16 ks. Time for a bit of fun in the shape of mud at the Huntly Boatie Ramp. People pay thousands to attend team building weekends, and here we were in all shapes, sizes and languages, carefully extracting boats through the mud. These are the moments that people will remember.

We needed a quick shower to wash off the mud and then a bit of a ukulele practice in the sun, a few French songs, a beer or two, and back in the bus for what was for many the highlight of the event. A fierce whiri from the men at Te Ohaaki Marae, and the most welcoming welcome from the elders. We sang utaina, a few speeches, kapahaka, and a beautiful hangi meal. Some of our men tried their hand at taiaha, ladies the poi – visitors a speech in French and one in German, each with a song. And then back into the bus, some sleeping before we reached the hotel.

And all of a sudden it is the last day. We found an alternative place to launch the boats – no-one relished the idea of the mud again. There are a couple of minutes between the first two crews, and the fight for third and fourth is close, only a minute or so between fifth and sixth. Only fifteen ks in this piece and everyone is vying for a place. The stop watch is out – hands are wrapped in blister-cover, but no-one is backing down. The river is low and sandbanks emerge where sandbanks shouldn’t be. Some crews have unexpected stops in knee deep water, which costs precious minutes!

Lunch at Rangiriri Café – whitebait fritters and pavlova – little bites of New Zealand on the Waikato river! A quick assessment of the river – more sandbanks, less river and little or no current, and decided that the last 27 ks would be difficult, and not worth the potential damage to boats, and boats were lined up in pairs for a final kilometer sprint, pride at stake. Serious stuff!

We didn’t quite cover the 184 ks because of low water, but the positive side of the drought was beautiful weather, a fine way to showcase the Waikato and New Zealand. We achieved the spirit of fair play on the river, mixed with a dose of healthy competition between people from all walks of life and corners of the world. We mixed Europe and New Zealand by travelling the countryside in quads (what we saw, we saw backwards!). We mixed exercise with excellent food and wine, and fatigue with humour. And Hoea Kaha it was!

A huge thanks to the generosity of BankLink, Fond Amities, Orcon, Gravity Coffee, Rowing NZ and to the openness of all of the participants, and volunteers for taking part and making the inaugural outing of Hoea Kaha possible!!

Some feedback from the Visitors

Getting to know about the Maori culture and history as well as enjoying magnificent scenery all the way was an absolute blast for me.

I can only insist on the flawless organization which allowed everyone of us to enjoy the best, not to mention the very thoughtful prizes awarded during the closing ceremony.

Definitely a hundred miles that I will never forget."

Hartmut Hafermann -Germany
< "We have had four intense days of sportive challenge, sightseeing and great company. I think this is a great way to get to know a country and its people.

We enjoyed rowing in the stunning scenery and learning about the Maori culture was a great experience.

And we have made friends here. Definitely the highlight of our trip, we’ll be back!"

Graeme Barker –Auckland coxed a French crew
From a cox's point of view it was wonderful being transported though a kaleidoscope of New Zealand scenery over 4 days. There was such a variety ranging from bush and forest-edged valleys, farmland, open lakes, city parkland, maraes and more. What a way to go cruising quietly down the river, with only the sloshing of oars to challenge the bird song and other sounds of nature. So interesting to cox through so much infrequently visited territory.