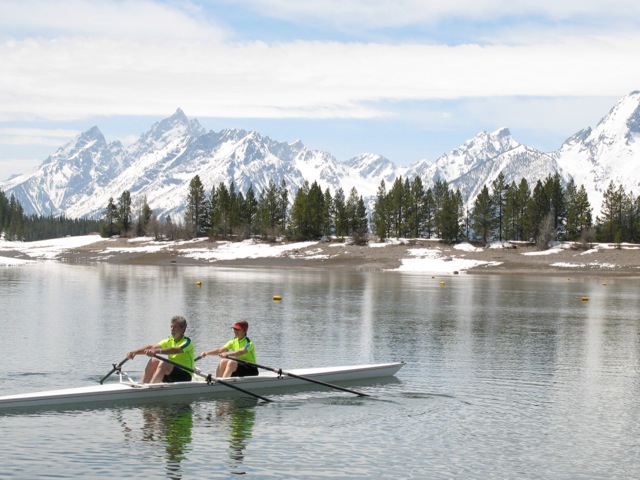 Jenny Lake in Wyoming
Editor's Note - Gallery from their travels can be viewed here.

Rowing has been an important part of our lives for many years. The passion all began in 1956 when, for whatever reason I investigated the Purdue Crew. I thoroughly enjoyed the crew experience. Jan went to Purdue before a women’s crew was established so she didn't get to row in college. Then about 18 years ago we discovered the Los Gatos Rowing Club and the passion was rekindled.

We are very lucky to both still be able to do this at our ages. Somehow the idea occurred to count the number of states we had rowed or competed in, either sweep or sculling. Including college, my number was 15. Jan who started as an adult could count on 10. From this was a small step to speculate as to what it would take to row in all 50 states.

We had enjoyed visiting Texas and Louisiana the last 2 years, but otherwise had not spent a lot of time in the south. Wouldn’t it be nice to row on the Mississippi up north where it is small? This would be an excuse to prowl around the Rocky Mountains. New York’s Finger Lakes and New England are all pretty places. Let’s explore them by boat. And so the plot was hatched!

We had already made plans to take a 4-day bike ride through Louisiana in late April, 2006. Why not combine this with a Row across America? Once we started talking about the idea we gradually became committed. We have relatives scattered across the country and shouldn’t they be counted on for a meal or lodging or both?

It takes lots of planning and good luck to find a satisfactory body of water in each of the 50 states. In 2006 we made a coast-to-coast trip through the south, visiting the states we had never rowed in. Then two years later we made a similar trip through the northern states to wrap up the 48 contiguous states. Alaska and Hawaii were challenges that proved to be surmountable due to the help of some very friendly rowers who willingly loaned us the use of their boats.

Where was the most memorable rowing venue? Hard to limit it to a few, but I really liked Salmon Lake in western Montana. It is one of a chain of lakes fed by the Clearwater River. A magnificent setting. We were told a good row would be up the lake to Sponge Island and back. Turns out the island received it’s name because the inventor of the contraceptive sponge bought the island and built a fine home on it.

Crescent Lake in the Olympic National Park is another stunning spot. It’s not far from Forks, WA, ground zero for the vampires of The Twilight Saga series of books. We were careful to get off the water well before twilight.

We also liked the Connecticut River by Dartmouth College, Lake Catherine outside of Hot Springs, AK, Lake Dunmore in Vermont, Louisiana’s Cane River and Jenny Lake in the Tetons. All were peaceful, pretty, were somewhat protected from wind and had long reasonably straight stretches of nice water. Rowing under the Golden Gate Bridge flunked all these criteria, but was an incredible experience.

Along the way we visited a great variety of boathouses, i.e. like the old ones that make up Boathouse Row, the many beautiful new ones, the clubs that row out of chain link fenced yards and Palmetto Rowing Club that stores their boats underneath the Old Oyster House restaurant. The simplest is in Whistler, BC where the boats are stored on the grass in the yard of a member who lives near Nita Lake.

What has been the best part of the trips? For sure it’s interacting with all the pleasant people we met along the way. Also, hearing loons, the long low moan of a train whistle off in the distance, and drinking coffee out of beat up mugs at breakfast in local cafes. Other highlights were seeing thunderheads build up and watching the black sky when rain is on the way, friendly people in rural Midwest America, seeing all the diverse geography in the US, especially the magnificent mountains of the west. Fried oyster Poboys, Maine lobster and the local craft beers were the most memorable foods.

In Pascagoula, MS we launched early one morning and rowed over to an old guy in a boat enjoying a cup of coffee. He wasn’t fishing. He said the bay was such a beautiful and peaceful place that he didn’t care if he caught any fish. He said, “Some days I just motor out amongst the islands and sip coffee while watching the sun come up.” We were lucky to have shared many special moments like this. Another one was at a peaceful lake/bird sanctuary in southern Illinois.

One of the best visual treats was the view from Idaho’s Galena Pass of the Sawtooth Valley and the mountains around it. It’s the headwaters of the Salmon River which flows 425 miles over to the Columbia River.

After a row in rural Montana we stopped at a desolate roadside restaurant called Trixie’s I asked the waitress which would she recommend - the Gardenburger plate or the fried fish sandwich. She said, “You know, hon, the west wasn’t won on salad.”

In Wyoming I asked a waitress what the local guys were like for dating. She said, “The cowboys weren’t much and the fly fishing guides all had big egos and didn’t treat women as equals.”

In Michigan we wanted to row on Lake Superior near Munising along the sandstone cliffs at Pictured Rock National Lakeshore. The afternoon we arrived the wind was clearly too much for us to handle. Everyone we spoke with had stories of how rough the lake could become in a short time. The best was from the ranger who had made a heroic rescue of a kayaker from the cold water. After the kayaker was safely out of the water he asked about his boat. The ranger looked out onto the lake and saw the kayak and also saw waves so big they partially obscured an ore boat that was passing by. The ranger said, “No, I’m not going to try and retrieve it. Your kayak is headed to Canada at 30 or 40 miles an hour.”

We tried to get a photo every place we rowed. Sylvan Lake in South Dakota was an idyllic lake. I asked a young man on shore if he could take our picture. He agreed. The camera was in a case, but should I just throw it to him? He said he played end in high school. “Well did your team win any games?” He said “my team went to the state finals my senior year.” So I threw a spiral and he caught it.

As best as we can recall, the table below includes all the spots where we rowed. A couple of times our destination lake was frozen. Sometimes the weather forced us to skip a place. In one case the reservoir we were planning to use had been drained so it could be dredged deeper.

Because we were always on unfamiliar water we were careful to watch for low water or debris is the water. However, we did lose the fin a few times and eventually used Home Depot Plexiglass .080” thick as an inexpensive substitute.

One venue deserves special mention. We had planned on rowing just across the Missouri River from Iowa on Nebraska’s Carter Lake. This lake is where Creighton College rows and that meant a good dock and a decent lake on which to row. This plan was not to be!

The evening we arrived in Nebraska, we drove to Carter Lake to check out the launch site location. Just before reaching the lake we passed a sign that said "Welcome to Carter Lake Iowa." Since we had driven over the Missouri River bridge and had been welcomed into Nebraska, we couldn't figure out the sign. Much to our dismay we eventually learned that a hundred years ago an ice jam had diverted the Missouri river and the oxbow that had been the channel by the border suddenly was isolated as the river cut a new channel a mile east.

The US Supreme Court heard the case on which state would have jurisdiction over the town. Iowa won. We wanted Carter Lake to qualify, but also didn't want a tainted effort in the Cornhusker State. We read the court’s opinion on line, but they didn’t seem to address who actually owned the water. All they seemed to care about was which state owned the citizens. So we reluctantly searched further for our spot and ended up at Branched Oak Lake where the University of Nebraska Lincoln’s Big Red crew rows.

We stopped for lunch in nearby Minton, NB at the Branched Oak Inn. Their signature burger was a half-pound of hamburger plus onions, cheese, pickles, lettuce and was topped off with a slice of ham. After a burger like that who cares if we didn’t row on Carter Lake.

In Wisconsin we took the advice of Roger Shellman of the Green Bay RC. They row on the Fox River. When asked how far upstream we should go he said. “Just go up to the Hogwart’s house and turn around there.” We had seen the first Harry Potter movie and had no trouble spotting the house. I’m sure the owner would be pleased by that description.

Many places had local clubs we relied on for advice about the water. Our best reception came at Delaware’s Wilmington Rowing Club. A member told us the rules do not permit outside boats launching from the club dock. However, once he learned we planned on rowing in every state, he realized how bad it would look if Delaware turned us down.

The club ended up treating us like royalty. In fact we went to dinner with a member, Don Krause, who after a beer or two asked if we wanted a tour of Philadelphia’s Boathouse Row. Our eyes lit up so he grabbed his cell phone and called his neighbor, Clete Graham, Commodore of the Schuylkill Navy. Clete was agreeable, so a week later we toured every one of the dozen boathouses.

And that's the end of the story….something like that...

We have had a Maas double scull for about 6 years and it has seen a lot of miles on top of the truck. The Ford F 150 has a rack on the roof and a Thule bar attached at the rear. The boat rides on a 10’ rack that is attached to the crossbars. The rack is very solid and even though the boat gets rocked a bit by a cross wind, the setup is very secure.

Where do we go from here? We have rowed in 4 Canadian Provinces. Hum? That suggests an intriguing idea.......