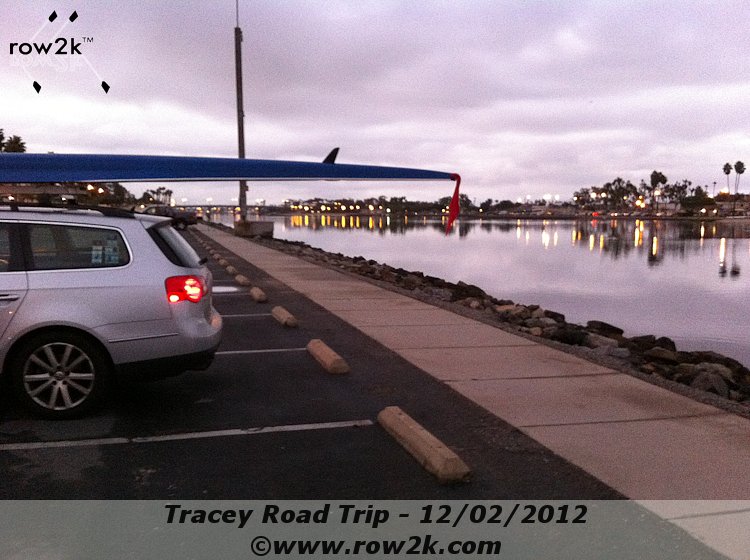 Unwittingly, I was about to bookend my trip with a final race in Long Beach, having started the trip by racing at the Head of the Schuylkill in Philly. I hadn’t planned on racing my final day, but when I decided to nix the trip to Seattle due to the oncoming monsoon season, the Long Beach Christmas Regatta, held on December 2, seemed like the perfect thing to do as a Final Act.

I would then pray for good weather to make it home. Mmmm…home… The idea tantalized me: my own bed, my own kitchen, a closet and bureau instead of a car… the little things that I always took for granted.

The night before the race, I drove to Long Beach Rowing Association to see if I could get an entry. Through Xeno, I made Facebook contact with Hope Wilkinson, the race organizer. It turned out that Hope was also friends with Kevin McDonnell, my first significant coach at Riverside and a good friend. I love how small the rowing world is.

Looking over the races, I was somewhat dismayed that there were no spots left for a masters single. Just like in the Head of the Charles, the men’s masters singles categories were the most numerous and the most subscribed. No fewer than three 50+ races, and all of them were booked solid. Not a lane to be found. However, there were a few spots in the open single event, which was the first of the day, starting at 7:00 AM.

This would surely test my non-morning-person lifestyle, but hey, I felt lucky just to be able to race at all, given that I was entering the night before. Each of the two open events had a spot available, but I noticed that the first one had a Graves brother in it, so I opted for the Non-Graves-Brother race.

I arrived in the pre-dawn hours to find one of the most beautiful racecourses I had ever seen with water like glass. I found my way to the other side of the course, where the beach-launching took place, and snagged a pretty good parking spot. Hope was at the registration desk, not far from where I parked, and she was on the phone with the row2k photographer when I arrived, apparently making sure they were all set to take a picture of the row2k writer who would be racing. Wow, I thought – I have “advance people.” I tried not to let it go to my head. I was a little more concerned about not being waked by the chase boat in my impending sprint.

I made it to the line with a few minutes to spare – enough time to don my newly purchased CVS Santa Hat, snap a few pictures from the line, and sip some much-needed water. I blew off the line at a 45 and had a hard time settling. All the caffeine and excitement kept me at a high rate for about the first minute, during which time I was pleased to see that I was still pretty much with the pack of elites. But that’s typical for me. I can hang with anyone for about a minute, but that’s when the trouble starts, and this race was no different.

About a minute and a half in, I dropped my rating to my “base,” which was about a 30, and held it there, but my legs began to protest. In fact, they pretty much decided to melt. I had never felt the sensation of melting quads quite as much as I did in this race, and the feeling was disquieting, given that I was still less than halfway done. After the melting sensation, my legs sort of took on a separate identity, becoming like lead weights that were barely attached to my body.

The elites were long gone, but I was still well ahead of two other masters men, who apparently had also opted for the open category (or, like me, missed out on the masters entry). I had been smart enough to self-time, so, noticing that I had about a minute left, I just sort of hung on for the final 30 strokes. I crossed the line with fried lungs and lead legs, but I felt pretty good about the piece – mainly because I managed to cross the finish line. I hadn’t died or crashed or gone for an inadvertent swim, so it was all good.

I also had a short, friendly chat with our heat’s winner, a guy named Young (didn’t get the first name), who finished in 2:58.9. I was just a teeny bit slower – 3:26.6. Not great for 850 meters, but given my training and the ungodly 7:00 AM starting time, not too bad in my mind. In the other heat, Peter Graves was the overall winner for open rowers, finishing in 2:51.5, followed by my new Newport friend, Erich Hanxleder, who clocked 2:55.8. But hey, like I said – I hung in there for about a minute!

Of the overall masters men, I didn’t fare as well as I had hoped. These Southern California Geezers were tough. Had I raced in one of the 50+ events, 10 out of 19 guys would have beaten me. Wow. That was a wake-up call. (These are raw times, not handicapped. I’m a purist – I think age handicapping is stupid, unless, of course, it works in your favor.)

I had a really nice time talking to people after the race. At this point, my long trip and all my blogs had caught up with me. People kept coming up to my car saying things like, “Hey, you’re that guy! That’s the car! The boat! You’re the traveling row2k guy!” It was really cool.

By coincidence, Susan Francia was coaching San Diego juniors, and their trailer was right next to my car. She graciously came over to me and asked if I wanted to take a few more pictures, which was really nice. After hamming it up for a few more shots, she asked how my race went. I said, it was fine, except that my legs pretty much blew up half way through. “Welcome to racing,” she said with a smile, and that comment made me feel a whole lot better.

I drove back over to the LBRA boathouse to give my boat a good washing before carefully wrapping it up for the 3,000-mile journey home. While there, I had the chance to meet and talk to Peter Graves, who was watching races with Erich and a few others. He was as nice a guy as everyone had said, and he was very complimentary about my journey, saying that it seemed to bring the rowing community closer together, which was an extremely cool thing to hear after logging all these miles. We talked about his Olympic experience in London, and he had the classic competitor’s desire to want to make the team again and try to do better at the next one in Rio de Janeiro, which was exciting to hear.

I then talked to the head of the junior program at Long Beach, a genial fellow named Alfredo Montenegro. I commented that I was impressed at how many young kids were sculling at this regatta – not something the U.S. is known for – as I had talked to a 15-year-old girl a few minutes before named Shannon Siemens who took fourth place in her novice single race.

We talked about how important it is for rowers to get in a single at a young age, and he said that he had about 35 kids in his junior program, and all of them were sculling. I know of some other junior programs that offer sculling, including Brookline High School’s program at Riverside, where my friend and former Brookline coach Joel Scaliotis had pushed it with his girls. It definitely bodes well for the future of rowing in the U.S.

My friend Linnet also raced and she and her doubles partner, McPhee, finished respectably overall, and first among lightweights, earning gold medals. Linnet has only been rowing for six months, so for her to cart home a gold medal – her first medal ever – was pretty special indeed. I was very happy for her. Later that day, as I was packing my things at Gayle’s house for the trip home, and feeling rather dejected that I had done so poorly among the masters men, Linnet and Gayle arrived in full-on celebration mode over her victory.

They then proceeded to tease me about my results, wondering if I knew how I had done among the lightweights in the open category. I hadn’t a clue – it never crossed my mind. Well, it turned out that there were only three lightweights, and I had beaten one of them, earning me a silver medal. They produced the trophy, and I was elated. I had a little Long Beach trinket to bring back home, which more than made up for my mediocre result.