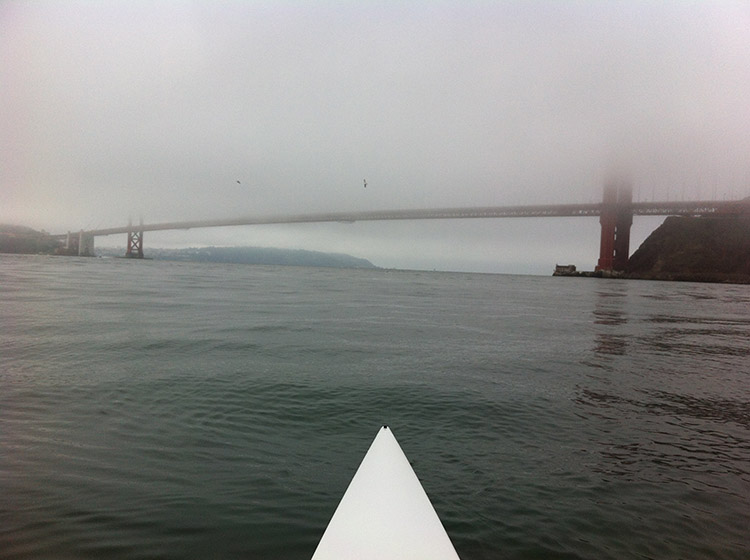 When I was in Newport talking to Xeno in the parking lot of the Newport Aquatic Center, I told him I was heading up the coast and would be in the Bay Area. He said, “You MUST row in the bay out of Sausalito Rowing Center – you can row under the Golden Gate Bridge!!” Well, that was all I needed to hear. He explained that they’d provide the ocean shells, the instruction – everything. It became a must-do item on my agenda.

At my sister’s comfy house in Oakland, I made a call to the SRC and a woman named A.T. Lynne answered. I could hear her boundless enthusiasm over the phone as I told her what I was doing. She was as nice as could be, and she made an appointment for me to show up the next morning at 6:30 for a guided row of the Bay. I was stoked.

That night, I went into Jack London Square for some Indian food. I was going to head home early for a nice night’s sleep, but after dinner, I spotted a funky Latin joint called Club Anton across the street from where my car was parked. I popped my head in and there were two guys standing there with curtains behind them. It was like Let’s Make a Deal – I had no idea what was behind those curtains – but I heard a band warming up in the back. Now even more curious because of my love for live music, I asked if I could go in and check it out. Sure thing, they said.

I went in (it was around 9 PM), and there were no patrons in the place – only people doing the sound with the band and others working the bar or setting things up. It was a really cool place. I asked about the band and the bartender said he had no idea who it was…some kind of private party or something. I watched the band do sound checks and decided that they looked very professional and could be really hot. In the meantime, I got to know the bartenders, Mark and Laura, who were 30, engaged, and had been sweeties since junior high school. They were really nice and intrigued by my story. We also talked about the Raiders and Broncos and the good old AFL Western Division (they looked at me, puzzled, and said “AFL??”).

After about an hour, I got tired of waiting, so I went out and walked around Jack London Square. I returned at 11:30 to find a line out the door and a bouncer calling out, “$35 cover people!” The place was packed and the band was on fire. I went up to the bouncer, wearing my Head of the Charles t-shirt and looking a bit out of place, and I said, “Hey, I was in here earlier. I’m friends with Mark and Laura. Is it okay if I go in?” He said, “Yeah you’re cool...you’re cool. You go on in.” I cut in front of the 20 or so people in line, without having to pay, and felt like, wow. Look at me. A 52-year-old rower from Boston at a happening place like this. I was psyched. But mostly I was psyched because the band was on fire.

It was wall-to-wall people, and the crowd was into it. I saw Mark and Laura, who were now a blur behind the bar because it was so busy, but they were still nice enough to say hi. I met some other really nice people, but mostly I just stood near the front, grooving to the music and really enjoying myself. It was an amazing night. However, I looked at my watch and thought, “Uh oh. I’m going to be rowing under the Golden Gate in a few hours. I better get going.” I got to bed around 2:30 AM and was up at 5:00 to get ready for the drive to Sausalito and the adventure awaiting me. It was Sunday, November 25.

When I arrived at the SRC, A.T. was there, along with my coach and guide, a massive oarsman named Tadas Petrys. He showed me the ropes on the Maas 24 ocean shell, and off we went. It was a very foggy morning, so we weren’t sure if we’d be able to see the bridge, but we gave it a shot anyway. As we got out and started to feel the swells, I noticed Alcatraz Island and thought, damn, if they only had a Maas 24 back in the day, then Clint Eastwood wouldn’t have had such a hard time escaping. Oh well.

As we got further out and the swells got more noticeable, Tadas said, “Look behind you.” I turned around to see the Golden Gate Bridge in all its glory. From the vantage point of a single scull. I kid around a lot on this blog about how everything is epic – the drive through Texas, the breakfast at the Hungry Fisherman in Morro Bay, the cobblestone fireplace in Carmel – but this…this was truly epic. The fog had lifted just enough so I could see the Presidio and buildings in San Francisco, Alcatraz, and Fort Baker in Marin – an old Civil War-era fort that has been converted to a fancy hotel. It was absolutely breathtaking. We didn’t make it under the bridge because they have a time limit (others want to see the sights too) and I had spent a bit of extra time snapping pictures, but it didn’t matter. I got what I had come for – an incredible row in San Francisco Bay.

We rowed back and Tadas explained that they have races from the Bay Bridge to the Golden Gate and back. Around the enormous abutments. Incredible. He said, “Yeah, you’re out there and you look over and there’s a wall of water 6 feet high right next to you.” The wall being a wave. And you’re in a single scull. Wow. Not sure I could race in that stuff, but I’d love to give it a try. I noticed the swells and felt the sensation of “rowing downhill” on the backside of them – it felt like surfing. But then the boat slows to a crawl and becomes very heavy as you haul your way up the next swell. Fantastic.

I took Tadas out for breakfast afterwards, as thanks for his time and kindness, and we had a great talk about rowing and training. He had just come off of a very disappointing year, in which he took time off in his late 30s to train for the National Team. He’s a big guy, having rowed at Cal and many other famous places, and I’m sure he was right in the thick of it and had a very good shot. But his knee blew apart as he was doing some land training, causing him extreme agony and a major surgery. Then it happened again a few months later, with another surgery. So he’s on the mend, but, as he’s in his late 30s, his Team hopes may be dashed. It just goes to show how hard it is to make it at the elite level. I hope he gets another chance – couldn’t happen to a nicer guy.