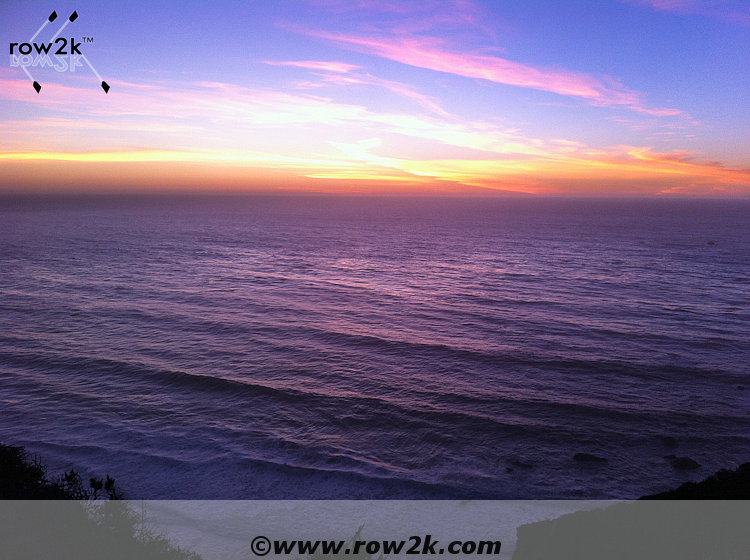 Thanksgiving sunset in San Simeon
I showered at the campsite and began my journey up the coast. My friend Randy (in Nashville), who had lived in California for 20 years or so and knew the coast like the back of his hand, called me and urged me to take it slow and soak it in, which was good advice and easy to follow. He told me about a cool, funky town called Cambria, which is just 13 miles north of Morro Bay. I stopped to have lunch and never left until the next morning. I just hung out, walked around, got to know some people, and loved every minute of it.

Having camped the night before, and being Thanksgiving Eve, I stopped into The Burton Inn, a B&B in town, and asked if they had a room. The owner, a lovely woman named Terry from Santa Barbara, said yes, and showed me to one of the largest, grandest rooms I've ever stayed in. I watched Gone With The Wind and fell fast asleep, waking up to sunny windows with a lovely garden outside. The breakfast was incredible – people eat very well in California. The food is fresh, the weather is awesome, the women are beautiful, and the taxes are obscenely high. I guess nothing is free in this life.

It was Thanksgiving Day, and even though I was all alone, I was as happy as I could be (except that my Burnham Boat Cover zipper broke and I had to wrap the cover around my boat with rope, but such a detail couldn't dent my ebullient mood). My next stop was San Simeon, where the Hearst Castle is located. The castle was closed, but I took a long walk out onto the enormous pier that juts into the Pacific. I just sat and soaked up the sun, wind and waves.

Back in my car, I kept driving, now getting very hungry. I stopped at a place called Ragged Point, on a high bluff overlooking the ocean. They had a fancy restaurant, but I wasn't in the mood to spend a lot of money and hang out there all afternoon. I got a cheeseburger and fries at the snack bar and took it out to the trail to eat. The view I saw there blew my mind. This was my Thanksgiving lunch, and I sat overlooking one of the most breathtaking vistas I've ever seen on a perfectly gorgeous sunny day. I took some pictures, got a latte and headed north again.

It was mid-afternoon and the sun was beginning to go down. The road winds around the mountains and the ocean, to the left, with the sun setting, was peaceful and smiling. Every view around every turn was incredible. People say, "Oh, you have to go to this spot or that spot." But the reality is that every spot along the way is mind-blowingly beautiful. I couldn't soak it in enough. Finally I just pulled over, got out of my car, and sat on the bluff, sun in my face, for about a half an hour. As I continued up the coast, the sun began to set, and again, I had to get out of my car. It was one of the most beautiful sunsets I've ever seen.

I pulled into Carmel around 8:00 PM. It was very dark, and there are no streetlights anywhere in town – it felt like a campground, only with buildings. (There also are no street addresses for any of the houses. And Clint Eastwood used to be the mayor. Yeah, this isn't your typical town). All the houses seemed small, dark and quaint. I finally found the intersection of the two main streets, Ocean Avenue and Junipero Street, and I decided to try my luck at staying the night.

You don't Priceline a B&B in Carmel – it's just not going to happen – but I thought I might get lucky, as I had the night before in Cambria. I stopped at one place on Junipero, which was full for the night, but they had a sister hotel down the street, a small cozy place called The Cobblestone Inn. I went in, spoke to a lovely young woman named Sidney (just like in Melrose Place!) and was told that they had one room for me for $100 for the night. With a cobblestone fireplace. I pinched myself a few times and was wondering where I might purchase a lottery ticket.

After getting settled in my picture-perfect room and having a nice shower, I walked down Ocean Avenue looking for a place to eat. I found a nice restaurant called The Grille and had their Thanksgiving special – soup, a full turkey dinner with gravy, mashed potatoes, fresh vegetables – and a nice dessert & coffee. Stuffed, tired, and feeling extremely happy and blessed, I hit the sack and slept like a log. Carmel was being very, very good to me.

The next day I drove up the coast, hoping to row somewhere in Monterrey. But I soon discovered that Monterrey just isn't a rowing town. I can't put my finger on it, but I just didn't get the vibe there. Plus the water and geography are pretty forbidding – I guess that was more the problem. I continued up around the bay into a landscape that I can only describe as Big Time Agribusiness. This is Del Monte country. Damp, dank, flat and fertilized.

I was going to try and row at the Elkhorn Slough, a large natural waterway and wildlife preservation up in the middle part of Monterrey Bay. But there was a huge, unattractive industrial complex of some sort at the mouth of the Slough, and it was all just kind of disgusting to me. I had just come from Heaven On Earth, and I was not impressed. But more to the point, I knew I was just hours away from my sister's house in Oakland, at which I was planning to take a few days of refuge to recharge my batteries – both mental and physical.

In a last ditch effort to get a row in, I made a call to the Los Gatos Rowing Club and someone picked up the phone! But again, my boat had to be inspected before I could put it in the water, and the inspector wasn't there (unlike Casitas, I could row my boat immediately after inspection at Los Gatos). So I just moseyed into Santa Cruz and called my cousin, Mott Jordan, with whom I hadn't spent any time since we were both about 14.

Mott is a successful commercial and fine artist in Santa Cruz, as well as a fantastic musician (just like his brothers, Josh and Eliot – the three kids were always off-the-charts talented). He couldn't meet me for a few hours, so I walked around and soaked in the Santa Cruz weirdness, which was fun. When we met for dinner, he said he was a vegetarian and asked if it would it be okay to meet at a vegetarian restaurant. I said, "Well, I've had a cheeseburger a day for about the past eight days, so I suspect it will be a welcome change." We met and had a fantastic dinner and conversation, joined by his adorable eight-year-old daughter, Olivia. I made it to my sister Anne's house later that night and crashed like a ton of bricks.

Next up – rowing to the Golden Gate and a major change of plan.