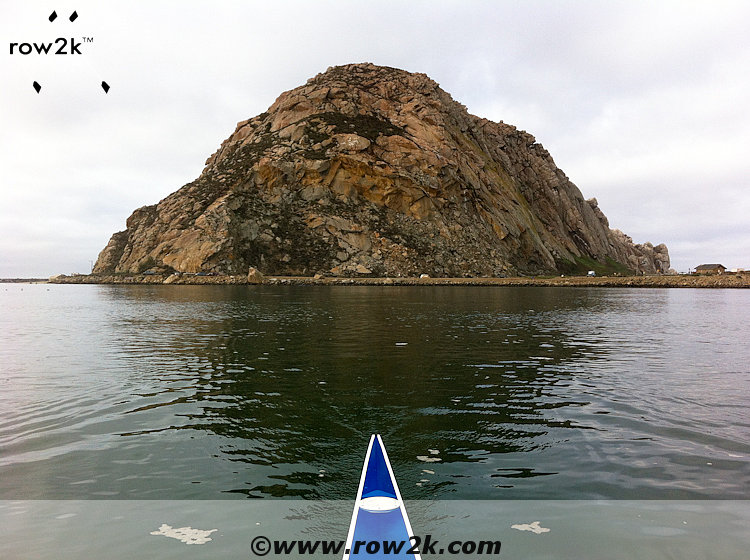 Morro Rock
Truckin', I'm a-goin' home
Whoa whoa baby back where I belong
Back home, sit down and patch my bones
And get back truckin... on...

Yeah, I can see this becoming a lifestyle. I figure that the only way I can top the Epic Rowing Road Trip is to start planning for the next one – the Epic Global Rowing Road Trip. It will involve planes, trains and automobiles, tremendous challenges finding single sculls in which to row in exotic places (I don't think I can cartop it), and a whole host of problems I haven't even thought of, but what the hell. It's out there, and it will need to be done.

For now, however, I'm still on the current Epic Trip, and the past week has been more epic than ever, if that's even possible. And I'm not making this up to make the blog sound better. Driving up the California coast was a big part of me wanting to do this, and I am still blown away by what I saw. There aren't enough superlatives to describe the views, but let me go out on a limb and just state the following: Highway One, from Morro Bay to Carmel, may very well be the most beautiful road on the planet. Certainly in the Top Three (though I will have to travel the world to find the others). Comparisons are stupid, so let me just go back to my earlier statement – there aren't enough words in the English language to describe it. The best I can do is to account for my time and see what happens.

I left Newport Beach, having had two consecutive days of rowing heaven. Perfect water, warm temperatures and friendly people. Despite all the glitz and glamour (hey, I don't mind, as long as they share some of it with me, which, unfortunately, they didn't), it was tremendous. It seemed like every house I rowed by either belonged to a movie star, fancy lawyer, or real estate developer. I mean these houses, which line the shores of Lido and Balboa Islands, are sweet. I suppose the only downside is that you'd have to put up with the personalities of those who live in the houses, but I could still do it – at least for a few months out of the year. I kept expecting Charlie Sheen to walk out of one of the houses onto his beach in his bathrobe.

I drove through LA, as described in the last blog, and spent the night north of the city in a town called Oxnard. My goal was to row at the infamous Lake Casitas, but it was going to be a bit tricky. I spoke with Wendy Gillet, one of the coaches (along with her husband Eric), and she explained that it wasn't quite as simple as plunking my boat in the water. California's inland fresh water lakes are having a devil of a time with a couple of invasive species called the quag and zebra mussels – especially the quag. I don't know much about it, except that it's like the Asian carp and killer bees and all that stuff. Very serious. So they require every boat to be inspected before it can go in the water.

But at Casitas, which is a stunningly beautiful lake, they go an extra step and, after the boat is inspected, it must be quarantined for 10 days. So that made rowing my boat a non-starter, but Wendy said that I could go out with Eric and his sculling group in their equipment if I could arrive at the docks by 6:15 AM. Hmmm…Wendy doesn't know what a non-morning person I am. Still, I thought, that was a very generous offer, and I would love to give it a try.

I thought of camping, which would have been wonderful, but I still felt the effects of my virus and I was becoming extremely tired and agitated after just one afternoon of driving around L.A. Plus, they would charge me $10 to bring my car in and another $30 to camp. So I booked a Hampton Inn room on Priceline for $50 in Oxnard, which is about 30 minutes away. I never made that 6:15 appointment, I'm sorry to say, but I drove to the lake and had lunch and took in the incredible scenery. Then I moved up the coast.

I was very excited to start the journey up Route 1. The weather was perfect and the ocean was beautiful. Not knowing much about where I'd stay or row, I just looked at the map for interesting geographical places. I saw that Morro Bay had a nice body of water with a campground. (I didn't realize that Morro Bay is a bona fide destination for its beauty – it's amazing what you can surmise just from looking at Google Maps.) I decided that my lungs and wallet could probably stand to camp for the night, so I arrived at the campground on the Tuesday before Thanksgiving, paid my registration, and found a nice little site. It was dark, but it was early enough for me to get set up, shower and go into town for dinner.

I found a nice local restaurant called The Hungry Fisherman and devoured a huge plate of seafood and pasta. I had a good sleep and woke up to an incredibly beautiful campground. After a big breakfast back at the Hungry Fisherman, which is a true local diner-type establishment, I went back to the campground and saw a kayak rental place with a freshwater hose and a nice dock. Perfect, I thought. A young lady was there opening up and getting things ready, and I told her my story and asked if I could shove off the dock. Like everyone I've met so far, she was friendly and more than willing to help. In fact, she had rowed at the University of Vermont, so she was very rowing-friendly. This is how it has gone all along... I am just amazed at how wonderful everyone has been.

At about 8:00 AM, I launched and rowed out onto the bay on an absolutely perfect warm morning, the day before Thanksgiving. Morro Bay's most distinguishing feature is Morro Rock, an ancient volcanic plug and a sacred site for the Salinan and Churmash tribes. The tide was going out fast, and Morro Bay itself is very shallow. I found many spots that were less than a foot deep, so I decided to stay in the channel and row out toward the breakwater on the south side of the Rock. I approached a spot where Sea Lions were hanging out – tons of them. They were making an absolute racket, and I just sat there, mesmerized and laughing. The water was flat, the air was cool and soft, and the sea lions were just giving it to me. It was awesome.

I continued out the channel as it bended around toward the rock. When I got just past the enormous mound, I noticed that the waves were becoming much choppier. I turned around to see the massive waves of the Pacific crashing over the breakwater, but I stopped to just sit and take it all in – the rock to my right (off my port side), the water crashing, birds everywhere, the dunes to my left. It was magic.

As I rowed back I had another visit with the Sea Lions, met a family of four kids out on paddleboards, and made my way back to the dock. The kids were funny. Two teen girls, 14 and 16, doing the paddling on two different boards, and their two younger siblings, 7 and 2 (yes, 2) each sitting on a board with the older sister. This is what California kids do on Thanksgiving holiday – parents chill out and let the daughters take the younger kids out for a paddleboard. Yes, that kid was 2, and he was sitting there, being paddled around, no life preserver, and he was doing just great. It was dead calm and they were being very careful, but still. The whole experience at Morro Bay will be etched in my mind, along with all the rows I've had so far, forever.