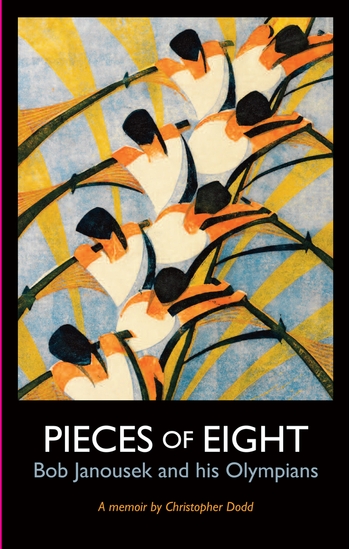 The recent North Korean flag mix-up on the eve of the London 2012 Games reminded rowing historian and journalist Christopher Dodd of a similar flap at the start of the 1975 Rowing World Championships.

Below is an excerpt from his book, Pieces of Eight, recounting the incident. row2k's Oli Rosenbladt reviewed the book, which focuses on the short, but eventful and successful Bob Janousek era in Great Britain from 1970 – 1976, back in June -- you can read his review here.

excerpt from Pieces of Eight, by Christopher Dodd

The 1975 world championships in Nottingham began on a sweet and sour note. Women from the People’s Republic of China took part for the first time, and they flew straight into the headlines when, as the Daily Mail said, ‘some idiot hoisted to a masthead the flag of Taiwan instead of that of the Peoples’ Republic’. The occasion was the opening ceremony on the banks of the Trent outside the palatial County Hall, where the Beeston and District Pipe Band, resplendent in Scottish regalia, provided the entertainment. (‘It is not known whether General Amin, the well known Scottish patriot, has yet appointed himself leader of the band,’ commented Rowing.

‘A hideous gaffe,’ Brian James continued in the Mail, ‘but the instant removal of the bit of offensive bunting and a fulsome apology were not enough – the Chinese wanted the Taiwan flag burned in public.’ Refused matches, they fussed about their ensign being at the end of the row of thirty-one flags, and were told it was because they were the most recent country to join the international rowing federation.  These visitors from Mars were also, of course, the butt of bad jokes from the fearful, an example being ‘Do they row with chopsticks?’

The next twist was a dispute over the hue of red, not to mention the five gold stars, on the blades loaned to them by Nottingham and Union Rowing Club. Graham Davies of Aylings, the oar makers, mixed six commercial brands of paint to arrive at an acceptable shade of red. The rift was finally patched up when city councillor Martin Brandon-Bravo organised a sumptuous twelve-course banquet for people’s republicans and Nottingham’s Chinese community at the Pagoda restaurant in Greyfriars. The silver lining of the storm cloud over the People’s Republic, Notts County Council and Nottingham and Union was that the world championships were launched in a fountain of publicity.