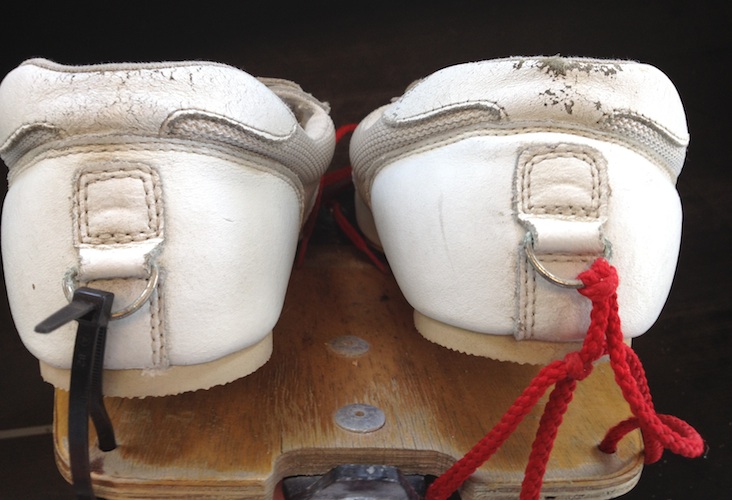 Zipped and set to go

note: thanks once again to Byron Walthall of Charlotte Youth Rowing for reminding us that this is a Rowing Hack-worthy trick.

Heel ties might be one of the major safety measures in our sport, but the truth is, most folks don't think about them until race day. Here is a quick Rowing Hack that lots of folks use when the heel-ties are found wanting: zip-ties. Fast, cheap, and very unlikely to loosen up before racing is done, zip ties are the Hacker's solution to the mysteriously untied heel tie.

Now, "Heel ties" are two words that probably get uttered more than "Attention, Go" on most regatta days, and that by a factor of six (lanes) at a major championship, as each crew is either told to check their heel-ties, quietly wonders "are they checking heel-ties?" aloud, and--inevitably--mutters something well, unkind, about heel-ties and the one rower who didn't check them properly when they get held up by the referee checking them at the launch dock.

One day, Rowing Hacks will have to commission a study to determine how many elaborate race warm-ups have been scuttled and rushed through all for want of one simple shoelace--properly and rightly affixed for safety--but for now, all we have is the simple hack of a pocket full of 12 inch zip-ties.

We've seen zip ties used in any number of other ways in boathouses all over, from launch key keychains to "reach straws" to lengthen folks out into the catch, but the bar-none handiest use of the humble zip tie is the quick fix it provides when your crew is one heel-tie short of being able to launch for their race.

If fixing heel ties was a simple as re-tying a shoe-lace, it would not need a hack as elegant as the zip-tie, but very often the quick re-tie is stymied by old knots, shortened, broken heel strings, and--of course--the tight quarters of the shell itself (it is no fun to try and get a string threaded into the back of a foot-plate jammed all the way to the stern and fitted with size 14 shoes).

The zip tie, though, is quick and very easy; a practiced hacker can almost do it one handed. When your crew is standing in line to launch, nothing is a faster fix for a suddenly too-loose heel tie.

Of course, it would be great if all heel ties stayed, well, tied, but we all know that doesn't happen: knots can slip, or aren't retied after a simple foot stretcher repair, and sometimes heel strings break altogether--especially if the shell spends any time at all in salt water. You may even have an athlete or two who unties them every time the shell leaves the dock, the better perhaps to rush the slide. In the face of all that, the zip tie serves a simple, vital function, and does it well.

The zip tie hack is, we should note, a Race Day Fix only: we actually don't recommend using them on every shoe in your fleet as a regular practice. In the end, a well-tied heel string will stay tied after all, and then, the next time you have to work on that particular foot-stretcher, the original, tied heel-tie is both easier to loosen and more reusable than a zip tie--and possibly more forgiving on the shoe itself.

Do you have a better hack for heel-ties, or another clever way to use these zip ties I'm always carrying around on race day? Let us know in the comments below.