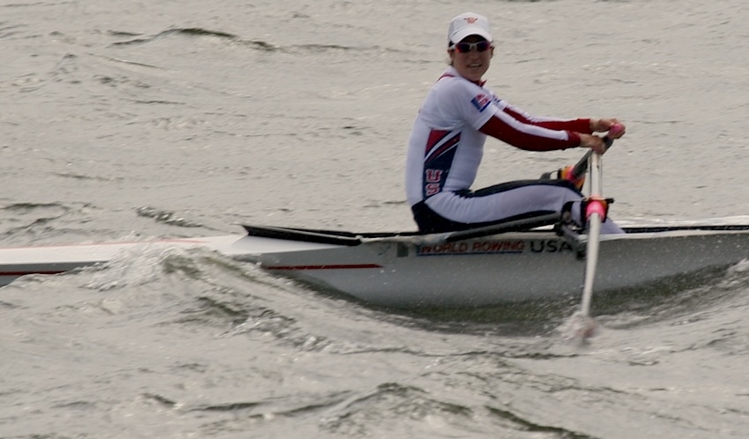 Rowers often find themselves racing in, shall we say, less than ideal conditions. Here is some of what folks were up against just this past weekend: "some chop" in Indy, "increasing chop" on the Basin, "tail wind and moderate chop" at Orchard Beach, and "increasing head wind and chop" in Derby--and that's from just a quick glance through the row2k results page.

Granted, it is not fair that all those weeks and months of training have led up to a crappy, windy day on which your ability to weather the weather matters more than your actual boat speed, but it happens--often. So, rather than being bummed, or beaten, the next time wind and waves try to play havoc with your race day, break out this old coaching trick to stay dry, light and fast: splashguards on the riggers.

Since there is no practical way to put a kayaking spray skirt on a rowing shell, splashguards--of any type--do the next best thing: they make your boat a little "wider " at each rigger to deflect some of that water away from the shell.

Let's face it: side-mounted riggers, with all of that hardware below the gunwale--and closer to the water line--can really pick up a lot of water you'd rather leave in the lake, and anything you can do to minimize the amount that gets splashed into the boat could easily be worth a handful of seats at the finish line, if not more.

Of course there are wing riggers and even self-bailing boats out there--not to mention all the gadgets that were set to be deployed at the 2004 Olympics in case Schinias pulled a repeat of the epic chop it unleashed on the 2003 Junior Worlds--but here at Rowing Hacks, we are all about cheap solutions that you can use on all your boats. If you are lucky enough to have a wing-rigged boat, or a shell with one of the newer hull designs that incorporates a flatter, wider gunwale that does part of the splashguard's job, that's great, but we bet even you can still use a few of these tips to be even more watertight when it counts.

The simplest splashguards are pure Hack: just grab a roll of duct tape and start covering the riggers. It might not look pretty, but 2-3 strips running across the rigger frame right next to the boat keep a surprising amount of chop at bay. When going the tape-route, it really helps to add a strip that connects the tape on the rigger to the gunwale itself, and a perpendicular strip running out onto the main stay keeps the hole thing from flapping around in the wind.

Plexiglass makes great splashguards, too: lightweight and easy to cut, they can be taped onto each rigger pretty quickly. One program that took its splashguards seriously, back in the 90s, actually made sets of fitted splashguards for each racing hull. These were made out of 3 inch wide plexiglass, with small holes drilled in each one, allowing them to be zip-tied in a jiffy to the rigger-frames on each boat. Hacking up these kind of solid-state splashguards might seem like a bit much, but if you had a championship each year on some notoriously rough water like these guys did, you might have made yourself a few sets, too.

Keeping the water out is, granted, just one part of the solution, so make sure your coxswain is prepared to deal with any water that does make it into the shell during the warm-up. You'd be amazed by how effective a sponge can be, especially one of those big, car-washing sponges you can get at any auto-parts store. Having one or two sponges aboard won't add much weight to your coxswain's gear, but they can be passed down the boat and soak up lots of water down in the hull, where it pools, that even a cup or bailer would miss.

You can also pack the crew off with a couple of hand pumps, like the ones you might use for your launch, and those work great for lots of water. Even so, a good sponge will get the last of the wet stuff, and is a great thing to have handy as you pull into the stake boats on a day when the conditions are gearing up to be a factor.

[of course, if you are really filling up--and going down--like the folks in this video, we can't pretend that even a sponge will help, though this coxswain sure gives it a try.]

So there you have, Hackers: next time March (and April, and May, etc) stays lion-like, make sure you break out your duct-tape and you biggest sponge . . . and if your boat came with a splashguard for the washbox up in the bow, please put it on--even if it looks like this.

Remember: this sport isn't about being streamlined in the wind, it's about being light and fast through the water!

Got any great hacks or tips for dealing with water than isn't under the boat? Let us know in the comments below.