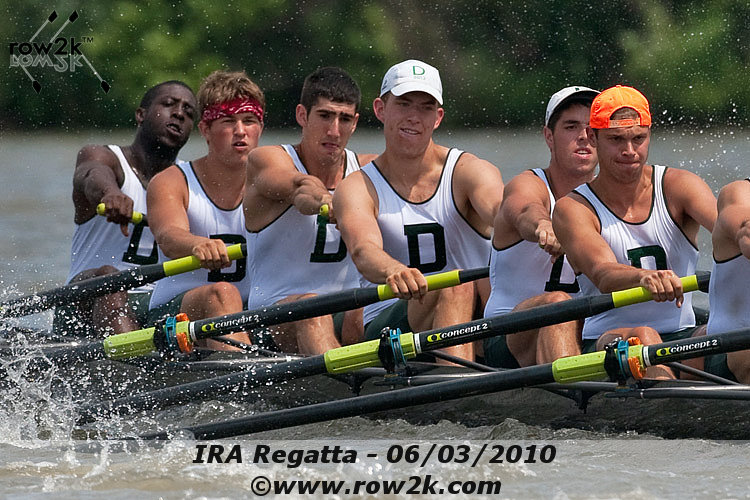 This week row2k brings you an interview with Dartmouth senior heavyweight rower Michael Odokara-Okigbo. When he's not rowing, Michael sings in Dartmouth's a cappella group, the Dartmouth Aires, and the group just recently finished as runner up on the NBC show The Sing Off. (Editor's Note - be sure to check out the clips of Michael performing in the last question)

row2k – How did you get your start in rowing and why did you decide to row for Dartmouth?
Michael Odokara-Okigbo - I started rowing at Dartmouth when I was a freshman: during orientation one of the coaches saw me and asked me if I wanted to row. I thought I would try it but I never expected it to be the most important thing I do at Dartmouth. I got into it and I loved it and have been doing it ever since.

I’m also interested in singing and I was attracted to an a cappella group there - The Dartmouth Aires. I also loved that the campus was secluded because for me I wanted to make life-long friends and I knew that any kind of rural scene, people would tend to hang out with each other rather go out to clubs and bars. I love that the professors teach you and you can have a one-to-one relationship with them and get close with them. I like the D-Plan there a lot, which allows students to take off terms. I’ve been able to travel to India, Nigeria; I’ve been able to see the world with the Dartmouth plan. I just fell in love with the school when I got here and knew this was where I wanted to be.

row2k – You mentioned the Dartmouth Aires; did you immediately join that group when you got on campus?
Michael Odokara-Okigbo - Yes, there are two things that happened before I matriculated: I auditioned for the Aires, and then I was discovered by a rowing coach and since then, that has been my life. I got into the Aires before my first day of class my freshman year.

row2k – How long had you been singing prior to that?
Michael Odokara-Okigbo - I’ve been singing as long as I can remember. My mom used to say that she used to play Michael Jackson, Dolly Parton, and Whitney Houston for me while she was pregnant.

row2k – The Aires were the recent season of NBC’s The Sing Off. How did the group get on to the show and what was your experience like in the competition?
Michael Odokara-Okigbo - We auditioned in Boston last spring and we never thought we’d make it. We were so lucky to be selected and given that opportunity. Being on the show completely changed my life. I’m a history major and I wasn’t really thinking about going into the arts and into music because, honestly, I was kind of in fear of it and I wasn’t sure that that was what I wanted to do. The Sing Off really showed me what I’m meant to do on this earth and I think I’m meant to sing and perform.

row2k – How did the competitive side of the show compare to racing during the spring season?
Michael Odokara-Okigbo - One of the cool things about being a varsity level athlete is that you learn, and then know, how to compete, so competing on the show wasn’t even a second thought for me. I wanted to win, be the best, and I wanted our group to hopefully win the whole thing. There were some parts in The Sing Off where I had to really dig deep and find some places I didn’t really know I had and really push myself. I completely lost my voice a few times and I had to just rely on what I’d trained for, what I’d worked for, and what I knew I had. That’s so similar to rowing: you train so hard for months and all that training just leads to one race and you have to be confident in the work that you’ve done and the fitness that you have and just give it your all.

There was an episode where we were battling it out for the finale and we were up against a group from Howard University, who were all music majors and were one of the favorites, and I feel we were able to pull through because we just really wanted it. I’m not saying the other group didn’t want it, but we have several athletes on the Aires and that kind of competitive nature really helped us as we were used to competing in athletics as well.

row2k – How did the pre-performance nerves compare to the nerves before a race?
Michael Odokara-Okigbo - They were very similar. For me, whenever I get nervous, that means I truly care about that thing that I’m getting nervous for. So it was good when I started getting nervous for The Sing Off because I knew I really cared about the product we were bringing to the show and that’s the same thing with rowing.

I get extremely nervous before erg tests and races, but I know that is my adrenaline working. Thanks to rowing, I’m used to using nervousness to my advantage. I know how to not be debilitated by my nerves and I try to use it to help me through whatever situation I’m in. On The Sing Off I was good at using that adrenaline to help me perform. The nerves for me are just adrenaline that is starting to work.

row2k – Is there anything you learned on the show that will help you with this upcoming racing season?
Michael Odokara-Okigbo - I learned that if I put my mind to it, that anything is possible. We were just a group of guys from Dartmouth College (there were only two music majors in the group), and we didn’t really have any right being on the show. What I think helped us throughout the episodes is that we tried to find an emotional attachment to each song so we could bring our truth to each song and hopefully the audience could connect with that. I think that understanding your truth is one of the most important things for a performer to know. The audience knows what is fake and what is not. I think the same is true in rowing: understanding what your weaknesses are and what your truth is in rowing is important because with that you can fulfill more than you ever thought you could.

row2k – To what extent did having another rower in the Aires help you and the group during the show?
Michael Odokara-Okigbo - Henry Luehrman is a lightweight rower and a great rower at that, and he obviously knows how to compete at the highest level at our school. There are days that I am really tired or burnt out from a really busy day, but it is always reassuring to see Henry at Aires rehearsal because he has an idea of what I invest my time in every day. It has been cool to share that bond for the past four years.

He’s one of my good friends and it was really great having him there on The Sing Off because we were also able to train together. There were no ergs or workout rooms at our hotel so we just ran a lot and it was fun to have a workout buddy for that.

row2k – You mentioned traveling abroad to India and Nigeria, what were you doing for those trips?
Michael Odokara-Okigbo - I started a foundation when I was 14 to promote education in the global south. When I was in India, I went to further my organization by working with another organization called CUP International, which is an organization that has started a hospital and orphanage. I worked as a teacher, teaching English and music. I also worked as a grant writer for an organization that is involved with Cup International that works on donating money and medical supplies. We tried to promote education in the global south and I think we did that. I also learned how to better run a non-profit. It was a great experience.

row2k – How has this season gone for you so far and do you have any specific goal for the spring?
Michael Odokara-Okigbo - Winter training has gone really well and our team is excited to see what we can do in the spring. My goal is to win every race and that’s our team goal as well. I think we’re working towards that. We hope to just have a great 2012 season.

row2k – What do you like most about the sport of rowing?
Michael Odokara-Okigbo - I like the fact that we’re testing our commitment every day. With rowing, you get what you put in to it and I like that a lot. I like that a lot of us do extra workouts to make ourselves and our team better. I like the fact that we push ourselves as a team; it’s competitive within the team but we all have the same goals. Our coach, Topher Bordeau, is great. He expects a lot out of us but he respects us a great deal. He also respects what we do outside of rowing. I’ve invited him to numerous singing performances and he always comes. I like that supportive nature of the team.

Rowing is just one of the best things I’ve ever done. It’s allowed me to be fitter and it’s changed my lifestyle. I don’t think I’ll ever stop erging and I don’t think I’ll ever stop being involved with the sport. It’s allowed me to be a better singer, with my core support and my diaphragm, which really helped me during The Sing Off. We did a lot of choreography, a lot of running. It is not easy to sing, and run around the stage, but I know how to manage my breath support to produce my best possible sound, and that is mainly because of rowing. It’s helped me with time management and I’m a better student because of rowing. Rowing has just made me a better person. I think the happiest I’ve ever been has been in college and rowing has been a big part of that.

row2k – Do you have any particular favorite performances from the show?
Michael Odokara-Okigbo - I have three. I think the first is we did a medley of Queen songs. That was one of those things where they ask us what kind of songs we want to perform and we said, “We have to do Queen.” They’re so brilliant and Freddie Mercury was probably the most talented male vocalist of the 70’s and 80’s. My mother raised me on Queen and loved them so much she almost called me Freddie. So I knew Queen’s music very well and I was able to connect with "Somebody to Love" really well. We also did "Shout", which I liked because I was able to perform a lot. Then we also did a song called "Pinball Wizard" by The Who which was a lot of fun, too.