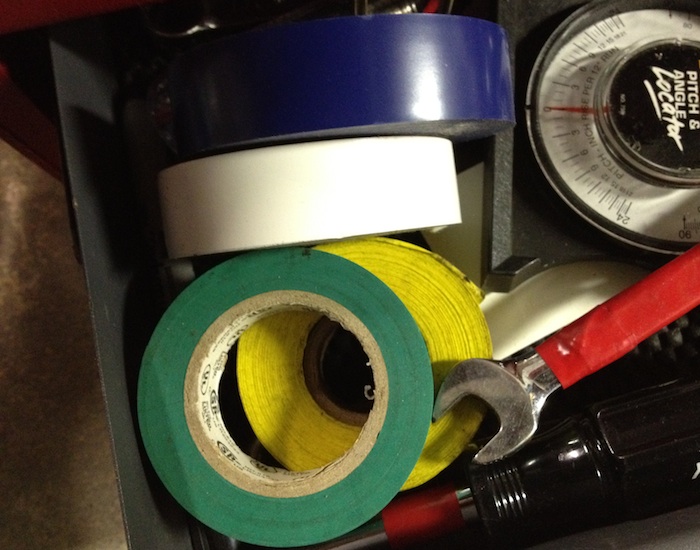 How many rolls live in your tool box?

In Rowing Hacks' quest to find the coolest stuff that folks use in our sport, we sometimes forget that some of the best ideas are already being used all over, so thanks to Byron Walthall of Charlotte Youth Rowing in North Carolina for reminding us to talk about a trick so good that "everybody is doing it" out there: marking riggers and other stuff with electrical tape.

Now, everyone like to sing the praises of duct tape--and rightly so!--but the real "tape workhorse" in most boathouses is electrical tape: it marks riggers from the same boat, the span on "tube" riggers, the center point on the coxswain's tiller rope, the best blade depth, and oars that belong in the same set--all in as many colors as 3M can turn out and stock in the local Home Depot. When it comes to a full boathouse of stuff that needs to travel and arrive together once it comes off the boat, the more colors of electrical tape on hand, the better.

Marking riggers from a single boat with the same color tape is probably the most common use for this trick, and for good reason: once you are done de-rigging your fleet, you'd hate to misplace just one rigger or not be able to quickly identify which boat a given bundle of riggers should follow during a big team rigging session at the race course. A great way to "user-proof" your color-coordinating system is to make sure there is a matching strip on the boat itself someplace, so that nothing winds up on the wrong shell.

When he suggested this hack, Byron pointed out that you can take this a step further: make sure there is a matching bit of tape on everything from the boat that is not physically attached--that way, any amount of part-swapping or seat borrowing can be quickly undone. At Byron's place, the matching strip on the shell, to which all that stuff is color-coordinated, is wrapped around the bowball. Neat.

That got us thinking about all the other ways electrical tape pulls it weight around here, and we came up with the list below. It is a pretty good collection of mini-hacks, and it doesn't even include the multi-purpose patch/tighten/adjust/just-plain-fix roll of BLACK electrical tape that lives in the bottom of probably every toolkit in the sport.

The Official Rowing Hacks Electrical Tape Use Hall of Fame

Identifying riggers by seat: sure, riggers are stamped with the seat number they were originally intended for, but once you starboard-stroke your port-stroked boat, start using mirror riggers, or just have to start using a replacement rigger not originally from that set, then actually writing the number of the seat on the electrical tape can really speed up re-rigging sessions. It also helps you swap the rig back-and-forth, if you are into that kind of thing: you can just tell the folks helping with the rigging to follow the number on the rigger or on the tape depending on which side your stroke is from this week.

Keeping your backstays straight: not literally straight, of course--still need good releases and a dearth of crabs to keep your backstays bend-free--but electrical tape can help you keep the backstays that go with each pair of wing riggers from getting mixed up. If you have wings, and change strokes, the wings can get moved back and forth a lot, and the length of the backstays can matter a great deal. One row2k Hacker gets around this by putting 1 piece of tape on the bow pair backstays, two pieces on three's/four's, three pieces on five's/six's, and four pieces on the stern pair. This trick can also save you some time finding the right length replacement when a backstay does--"somehow"--get bent.

Grouping oars by set: there might be some places that still number (or "letter" ) their sets of oars, but marking sets with electrical tape has got to be the #1 use of electrical tape besides riggers. Some places go with different colors, or color combos ("Who's using the yellow-whites today?"), but you can also be a bit less rainbow if you just stick with numbers of stripes, so that your "double magenta" set, let's say, is just marked with two stripes of purple tape. (Marking the whole set is especially good with spare oars, especially if folks need to find a spare quickly in a separate rack)

Telling Port Oars from Starboard: once upon a time--pre-"hatchet" blade--there were plenty of places where port and starboard didn't matter when it came to the oars. (Unless your oar design had a top and bottom, like say, a US national team blade, you just grabbed any one of the eight oars and off you went--and this was especially true at both UW's). Now that blades themselves are asymmetrical, the oar manufacturers helpfully mark them with red for port and green for starboard and everyone has to take one for the correct side--but that job used to be done just fine by electrical tape, and in some places it still is.

Assigning Oars to a Boat: matching colored tape also comes in handy when you have a set of sculls rigged specifically for a quad or maybe a smoothie set matched to a boat that is optimally pitched to work with the blade design. This tape trick also works great for other stuff "assigned" to a specific shell, like a dedicated cox-box or speed coach. (An advanced form of this mini-hack? Identifying oars from a given set that have been tweaked for a four or pair. This can save you from the time-suck of adjusting all 8 when you just need an "oar sub-set" of 2 or 4.)

Marking a specific coach's/squad's tools: electrical tape can be real tool-saver in big and/or shared boathouses: color-coding tools that belong to a specific team or coach makes it easy for folks to return borrowed tools to the right place--particularly when you might have forgotten to ask about the whole borrowing bit in the first place.

Setting the center point on the coxswain's tiller rope: gotta know where straight is, right? Plus, having the center marked with tape right on the tiller rope, in front of them, can save a coxswain (some) head turning in tight pieces.

Marking the span on "tube" riggers: on older style riggers, where you could adjust the spread by sliding the pin in/out of the main stay, electrical tape does the job of setting the span by limiting how far the pin can slip back into the tube--and, in quite handy fashion--bunches up or shows a gap if the pin has slipped and the span has changed. This hack doesn't last quite as well on Euro riggers, but it still works for quick rig changes: set the tape where the span needs to be changed to, and then do all your pin-moving sans tape measure.

Setting optimal blade depth: here, you just wrap a piece of light-colored tape around the shaft to mark where the waterline should be when the blade is in at the optimal depth. The actual distance of the tape from the blade might vary a bit according to oar length and the weight of the crew, but it is easy to move, and provides a great reference point for the athletes, and for your video camera.

Measuring Rigging Magic: we won't give away any secrets here, but you can usually tell--strictly by the amount of electrical tape on the gunwales and tracks--when a shell belongs to a coach who really measures every angle in the rigging.

Emergency Pitch control: organizing stuff aside, just a few wraps of electrical tape on the face of the oarlock is a great fix for little pitch adjustments--one that lets your tools stay put in the tool box. In fact, this might be electrical tape's coolest use of all, apart from that serendipitous moment when you find a lost tool, and recognize it as yours thanks to…electrical tape.

So that is our Hall of Fame for the humble roll of electrical tape -- did we miss any great tape tricks that you know of? Let us know in the comments, fellow Rowing Hackers! 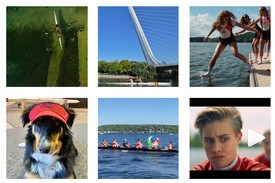