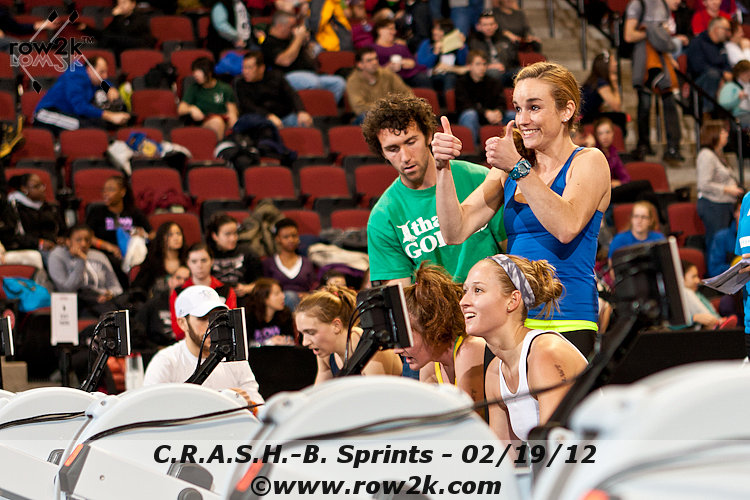 Landy giving the thumbs up at the 2012 CRASH-B

This week's row2k Interview is with Georgetown lightweight rower Erin Landy and covers, among other things, her realization that pilates might not trump erging, her recent audition with the Blueman Group, and her personal experiences with tigers' blood.

row2k - How did you get your start in rowing and why did you decide to row for Georgetown?
Erin Landy - My friend’s older brother told me there was a sport out there for people who lacked hand-eye, foot-eye, any coordination whatsoever, so I went to the info session for Lake Braddock Crew and gave rowing a try. As it turned out, all you needed to do to be halfway decent at rowing was to try really, really hard. So I did that and here we are eight years later. I was actually thanking my freshmen coach earlier this summer for asserting that I would probably get farther in the sport by erging fast instead of doing Pilates with my friends like I asked her (a pilates2k interview would be far less interesting anyway). So after that chat during winter conditioning of freshman year, I knew I was in it for the long haul. My recruiting process consisted of me emailing every school that participated in the women’s lightweight events at the IRA hoping to fill the “hard-working, extreme rower with pizzazz and potential” niche. Luckily, the 130s at Georgetown welcomed me with open, quirky arms, so I felt right at home the nanosecond I stepped on campus.

row2k - What have been some of your favorite memories so far of your rowing career?
Erin Landy - Obviously I like memories of us winning, but my favorite memories are the ones that gave us the strength to succeed in the process. Like those workouts where you look back and you were pretty sure you were legally dead going in to the 3rd 500m; plowing through rogue kayakers to practice; never backing down to a challenge; déjà vu from the scene in Miracle after they tied Norway in a scrimmage; finding out exactly how many intervals an erg will register…twice; and, feeling exactly how I look in that picture in the last 250m. Without memories like these, success wouldn’t be nearly as sweet.

row2k - You have some interesting hobbies outside of rowing, including training to be in the Blueman Group. How did you get into that?
Erin Landy - Fact: I did audition to be in the Blueman Group. Everyone needs a fall-back career in this economy. Unfortunately, I am 1 inch too short for their strict height requirements, so I have also applied to be an intern with Blueman HQ in New York. Fingers crossed! I also moonlight as an international supermodel of sorts, working as a JL regatta sales rep in such exotic lands as St. Catherine’s, Canada and the “Paris of rowing fashion”, Camden, NJ. It took a while for me to find my groove in college, so I’ve dabbled in things around campus like improv, coral farming, working at the National Zoo, chasing butterflies around DC for a summer with the Ecology lab, co-hosting a weekly radio show, and even a brief and unsuccessful stint on the Georgetown Step Team. My current gig is tutoring various university employees in English and Citizenship, which is a ton of fun. You’d be amazed how many great opportunities are available to you if you just ask.

row2k - Any outrageous stories from those experiences?
Erin Landy - If you are looking for fun team bonding activities, nothing brings people closer than filming a creative cover letter for the Blue Man Group, or Bananagrams. The research I conducted at the zoo is due to be published in a scientific journal soon, which is pretty outrageous. But not as outrageous as having to relocate 80 vials of real tiger blood from one freezer to another at the height of the Charlie Sheen craze. We were also fortunate enough to meet and interview some of the performers that came through campus for concerts on our radio show. The Super Mash Bros not only know how to throw together excellent erging jams, they are also not too shabby at holding enthralling on-air conversations.

row2k - How has this season gone so far and what are your goals for the spring?
Erin Landy - A tragic run-in with an aggressively slippery floor kept me out of commission this entire fall with a broken hand, but the rest of my team got by with stunning aplomb. Fall was all about building a base and getting to know our new coaches as well as establishing a revived team culture. Once we figured out how we were going to function as a team, the focus shifted to maximizing all 130 pounds of talent and potential within each of us. So far, we as a group are mercilessly slaying winter season and having fun doing so. As for spring, the overarching goal is to get the bowball ahead and keep it there. I have a good feeling that this is the season where our theme is no longer of the underdog, but of the alpha dog.

row2k - What do you like most about the sport of rowing?
Erin Landy - xoxox <3 ERGING! <3 xoxox And in a close second, I love how the sport leads all participants in the pursuit of just barely unattainable perfection. Nobody out there rows perfectly, but it is that insatiable drive to reach perfection that keeps them out on the water and eventually on medal stands. Plus, as soon as you tell a non-rower that you row, they automatically assume that you are crazy intense, which saves a lot of explaining down the road.

row2k - What are you studying at Georgetown and do you have any plans yet for after graduation?
Erin Landy - As the only Biology (not pre-med) major with a minor in Performing Arts, I am clearly studying all the interesting things at Georgetown. The career aptitude test we took in 8th grade told me I should pursue a career as either a killer whale expert or a magician, so it was only logical that my studies be focused on these two seemingly unrelated subjects. As for after graduation, still no official plans. Ideally, I would say that I plan on being an eccentric billionaire. I definitely plan on staying very involved in the sport of rowing. Nobody rows perfectly, but I’d like to give as many people as humanly possible the opportunity to try with me.